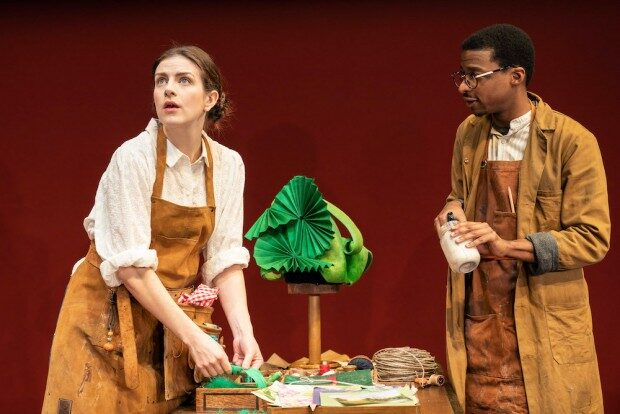 Aisling Loftus and Simon Manyonda in "Far Away." Photo by Johan Persson.

Caryl Churchill, Britain’s best living playwright, is enjoying a spate of high-profile revivals of her classic work. Last year, the National Theatre staged her Top Girls, and an upcoming production of A Number is coming soon to the Bridge Theatre. In the meantime, Far Away, her visionary 2000 play about genocide and the war on terror, arrives at the Donmar Warehouse. Twenty years after its first outing at the Royal Court, when it was staged by Stephen Daldry (didn’t he do well?), it is now directed by Lyndsey Turner, who in 2019 reinterpreted Top Girls as a big state-of-the-nation drama, in a notably fluid and high-definition way. Can this Churchill specialist cast a similarly fresh eye on this much more slender play?

Far Away is short, very short, yet it suggests a huge canvas of pain. Of its three brief scenes, the first is set in the kitchen of Harper, a middle-aged woman who lives in a remote house. Her young niece, Joan, has accidentally witnessed a horribly violent scene involving Harper’s husband. The aunt tries hard to persuade her that she’s imagining things. But we know better. The second scene is set in a workshop, more than a decade later, where Joan has begun work as a hat maker. She chats with Todd, who’s been there for a number of years. Gradually, it emerges that the hats are part of an extremely disturbing genocidal ritual. In the final scene, in which the writing goes to the dizzy heights of the imagination, Harper and Todd are waiting for Joan at Harper’s house, and their dialogue evokes a world war that is completely crazy.

The play is a good example of leftfield theatre, in which contemporary issues are depicted in a dazzlingly un-naturalistic way. Its course is increasingly unrealistic and increasingly surreal, but also resonant. At various points, the story evokes the genocidal horrors of Nazi Germany and the 1990s Bosnian civil war and, which is even more remarkable, it seems to anticipate the total craziness of the 2000s global war on terror, as well as recent anxieties about catastrophic climate change. Watching this revival, you can’t help but think of the banality of evil. The story shows how ordinary people get sucked into witnessing, or accepting, really bad things. But, more hearteningly, it also shows that resistance is possible. Yet, at the same time, it might be totally, and depressingly, futile.

I do love this play, but I must admit that — unlike Churchill’s very best work — its meaning doesn’t deepen very much over the decades. You could argue that, in the era of Trump, it feels even more like a prediction of the future than a vision of a dystopic nightmare. But the nature of visions is that they either come literally true, or they remain visionary, and this one remains what it always was: a beautifully imagined fantastical catastrophe. In the year of Brexit, the brief mention of France as the “enemy” gains some strength, and the similarly casual mention of China likewise feels contemporary. But more striking still are the surreal passages describing the evil of crocodiles and the threats, not of international capitalism, but of international dentistry. Yes, it’s also gently amusing.

But if the content of the play is an escalation of the bizarre, the patterns of thought of the handful of characters are disturbingly familiar with their bigotry, twisted reasoning, and blindness to horror are all too human. In times of stress, blame the traitors. Suspect everyone. As Joan, Harper and Todd react to life first in a regime, witnessing the increasing cascade of violence and systematic murder, then taking up arms to resist it, their political awareness grows. As this happens, their arguments get more bitter and more painful. Radicals can never easily agree. So recognizably human. Amid the imaginative playwriting, there’s a strong pull of emotional realism. In the end, we are witnesses to the trauma of atrocity.

Turner’s production is attractively designed by Lizzie Clachan, whose background and floor are red baize, and their staging of the crucial parade scene, with its noisy Viennese waltz music, is vivid in its cruel mockery of humanity. Blinding flashes of light cover the fluid scene changes, and the detail of the production is well observed. In the opening scene, for example, Young Joan — played on press night by Sophia Ally (a role shared with Abbiegail Mills) — has dirty feet because she has climbed outside on a tree; Harper works on a rug that has a nostalgically bucolic picture on it. In between scenes, Young Joan is shown peering into a lorry, carrying a workbox or transporting a Kalashnikov. But while this production is sharp and vivid, I did sometimes find myself wishing for something more original in the staging: Must all versions of this kind of play be essentially the same?

Still, the cast delivers thoughtful performances: Jessica Hynes, BAFTA winner familiar from W1A and Years and Years, gives a convincing and mildly funny account of the evasive Harper when she is confronted by the beautifully observed naïve curiosity of Young Joan, although her touch is less sure in the final avalanche of surrealism. As the adult Joan, Aisling Loftus is touching as the newcomer to the workshop, growing into the tense and troubled freedom fighter opposite Simon Manyonda, who brings to the part of Todd a sincere and grounded common sense. But while Churchillian devotees will admire the cool economy of the writing and the emotional truth of the acting, other theatre-goers might wonder why they should take the trouble to see a show that barely lasts 45 minutes.

Far Away is at the Donmar Warehouse until 4 April.

This article was originally posted at Sierzo.co.uk on 12 February 2020 and has been reposted with permission. To read the original article, click here. 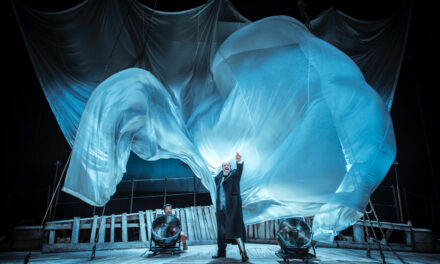 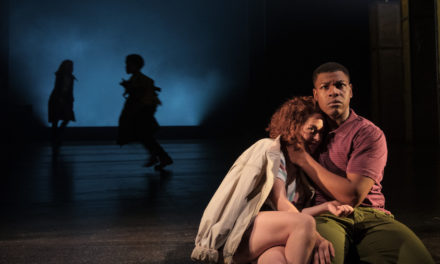