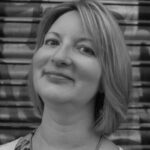 Erin B. Mee is the author of Theatre of Roots: Redirecting the Modern Indian Stage, co-editor of Antigone on the Contemporary World Stage, editor of DramaContemporary: India, and co-editor of Modern Asian Theatre and Performance 1900-2000. She has written numerous articles for TDR, Theatre Journal, American Theatre Magazine, and other journals and books. Her born-digital Scalar article “Hearing the Music of the Hemispheres” won the ATHE-ASTR Award for Best Digital Article in 2016. She has directed at the Public Theater, New York Theatre Workshop, SoHo Rep, HERE, The Magic Theatre, and The Guthrie Theater in the United States, and with Sopanam in India. She is Founding Artistic Director of This Is Not A Theatre Company, for whom she has conceived and directed the critically-acclaimed Pool Play, A Serious Banquet, Readymade Cabaret, Ferry Play, Subway Plays, Festival de la Vie for the Avignon Festival, Versailles 2015/2016/2017, and Pool Play 2.0, which performed in New York City and at the International Theatre Festival of Kerala, India. Café Play and its revival Café Play 2018 took place in an actual café, and audiences ate during the critically-acclaimed performances. She is Assistant Arts Professor, Department of Drama, Tisch, NYU.

We walk through a dark corridor into a room where a woman is drying wine glasses. She lifts them...

Most writing on site-specific, immersive, and interactive theatre focuses on productions in...

What do Napoli, Avignon, and Edinburgh have in common? They host world-class international theatre...

A Wounded Soldier pushes pawns across a chess board while a Mother tells Svetlana the story of her...