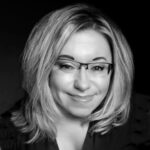 Magda Romanska is a writer, dramaturg and theatre, performance and media scholar. Her research focuses on theatre and globalization, the intersection of theatre, media, and technology, including digital and multiplatform dramaturgy, human-AI interaction in performance, the ethics, and representation of human enhancements, and posthuman theatre and performance.  A graduate of Stanford’s honors program, and of Cornell’s doctoral program in Theatre, Film and Dance, she is an Associate Professor of Theatre and Dramaturgy at Emerson College in Boston, MA, a Research Associate at the Center for European Studies at Harvard University. Her past books and publications cover the areas of post-traumatic theatre, a theory of comedy, and dramaturgy. She is the author or editor of four critically acclaimed theatre books, including The Post-traumatic Theatre of Grotowski and Kantor, Reader in Comedy: An Anthology of Theory and Criticism (co-edited with Alan Ackerman); and The Routledge Companion to Dramaturgy, a leading handbook of dramaturgy. Her fifth book, TheaterMachine: Tadeusz Kantor in Context(co-edited with Kathleen Cioffi) is forthcoming from NUP.  She is also the sole editor of a ten-volume series Focus on Dramaturgy from Routledge. She has served on the editorial boards of Theater magazine, the Yale Journal of Law and Humanities, Diacritics: A Review Journal of Criticism and Theory, Journal of Law and Theatre, and Polish Theatre Perspectives. She was also a founding editor of Palimpsest: Yale Literary and Arts Magazine, which was featured in Print Magazine’s Regional Design Annual and chosen from among over twenty thousand entries. Her editorials and theatre reviews have been published in The LA Review of Books, The Boston Globe, Hot Review, and The Cosmopolitan Review. She has taught over 30 courses on theatre, performance and transmedia, including at Harvard University, Yale School of Drama, Cornell University, and Emerson College. She has also worked on over 30 theatre and opera productions as either dramaturg, playwright, or director, and she has served as the resident dramaturg for the Boston Lyric Opera. MagdaRomanska.com

Since February 2022, Western and Ukrainian media have reported on the kidnapping and forced...

The #MeToo and Black Lives Matter movements have forced Hollywood and other artists and filmmakers...

Disclaimer: I was Jeremy’s teacher at Yale during the time he wrote Slave Play, so this isn’t a...

We are republishing this article from 2012 to remember Boguslaw Schaeffer who died today….He...

The Wooster Group’s newest production, A Pink Chair (In Place of a Fake Antique), was...

Today, we are launching The Spotlight on Poland. Here’s the context….. Following the fall of the...

The Theatre Times: Why? Why Now?

TheTheatreTimes.com is a non-partisan, volunteer-based, global portal for theatre news. With an...

The connection between humor and disability is perhaps one of the most challenging and...

Mieczysław Weinberg’s Opera “The Passenger”: On Memory and Forgetting

Between Art and Science: A Conversation with Roald Hoffmann

Roald Hoffmann was born in 1937 in Złoczów, Poland. Having survived the German Nazi occupation, in...

Although historically Polish theatre has gained worldwide renown predominantly thanks to its male...

BLO: What is a dramaturg? MR: In its broadest and earliest definition, dramaturgy means a...

Mitt Romney’s offhanded crusade against Big Bird, announced in a presidential debate with...

During the ten years of its run, when asked what I thought of Mabou Mines’s Dollhouse, I’ve always...

Polish theatre has gained world renown thanks to its innovative and bold experimental style. In...