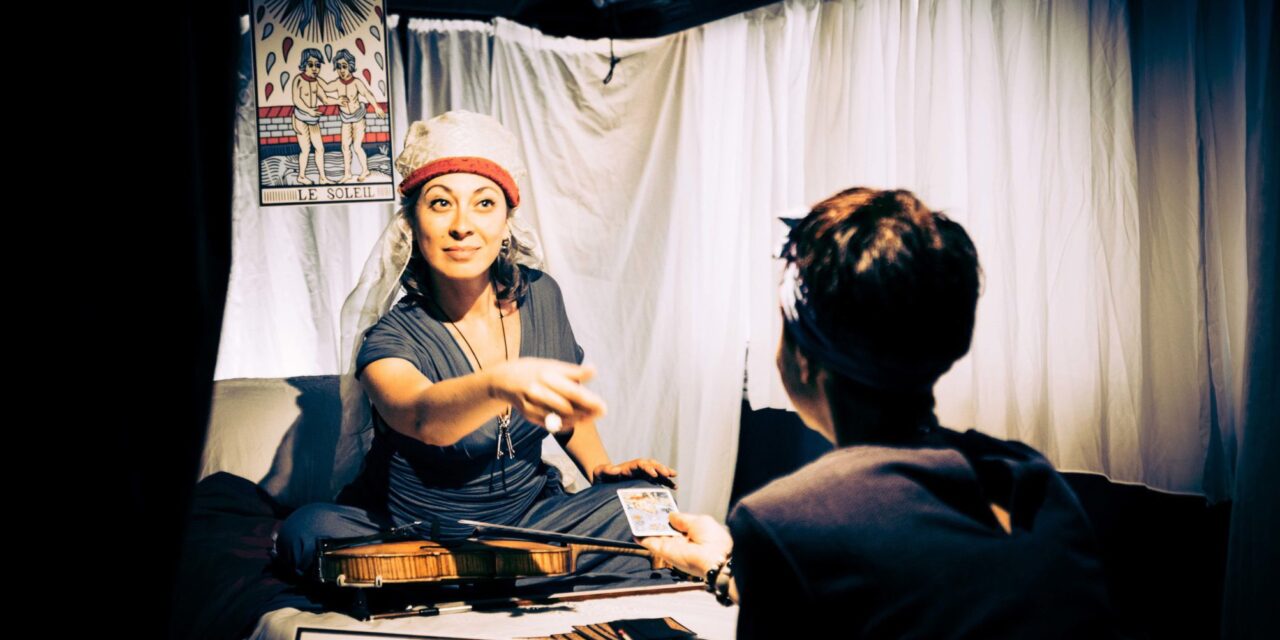 Most writing on site-specific, immersive, and interactive theatre focuses on productions in London, New York, and Los Angeles, and many people associate immersive theatre with those cities. But Naples has its own immersive theatre – of extraordinarily high quality (and in some cases much higher quality). Several productions are showcased in this year’s Napoli Teatro Festival. 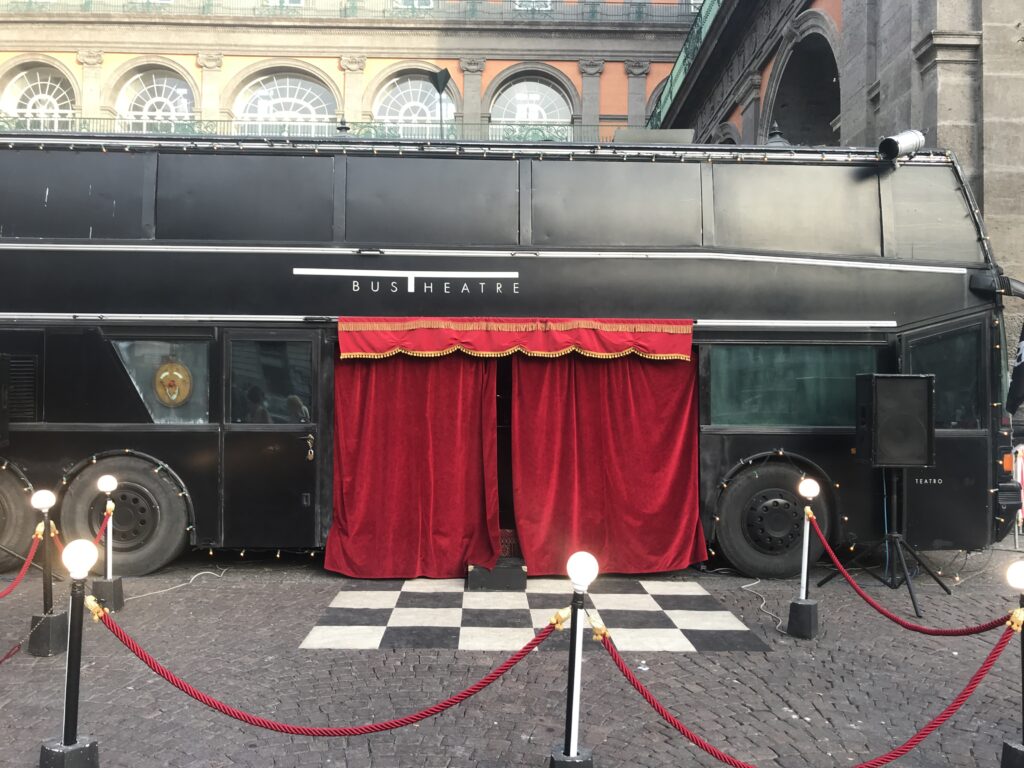 In Vita, Morte E Oracoli (Life, Death, and Oracles) we are warmly welcomed into Bus Theater’s double-decker theatre-on-wheels, a bus that has been renovated to include five miraculous playing spaces, and trap doors through which plates of delicious chocolate emerge. A Charon-like figure (Alessio Ferrara) ferries us from the world of reality to the world of dreams and accompanies us on our journey. The Charon-like figure is also a munaciello, an ancient Neapolitan spirit that was thought to reside in people’s houses and was a symbol of protection. When we first see him, he carries a small carousel in his hand, and to my delight, it turns out to be a music box that fills the bus with tinkling sounds. As it plays, we smell flowery perfume – the size of the bus-theatre allows for an intimate event in which scents and small music boxes can fill the room and envelope the audience.

A curtain sweeps open to reveal a puppet who is dressed to the nines, chain-smoking, and insisting that she is the star – in spite of, or perhaps because of, the fact that she is past her prime. In a raspy voice she beckons a young man to sit next to her so she can sing “bésame me mucho […] love me forever and make all my dreams come true” directly to him – and, of course, receive a kiss. Throughout this hilarious scene (in which the puppet occasionally adjusts her sagging breasts, argues with her puppeteer (Pilar Peñalosa), and hogs the spotlight), we feel the tyranny of time, the disconnect between how old we look and how old we feel, and the brevity of life.

Charon invites us up the stairs where we encounter a very drunk magician (Yuri Parascandolo) who, between gulps from his hip flask, demonstrates the illusory nature of the visual world. Things are never what they seem.

After we meet a violin-playing tarot card reader (Francesca Masucci), we are introduced to Yorick’s skull, a memento mori – or reminder that we are only human and that death is always near. In the penultimate scene, we are treated to dance between a woman (Ilaria Cecere) and her lover – a trenchcoat that she manipulates with her right arm. Dancing with herself/him, hugging herself/him (has their love made them into one person, or are they still two?) he takes her heart away – and although she gets it back, she will never be the same again, as no one is after they have truly loved.

Bus Theater’s thoughtful, moving, and whimsical examination of the fleeting nature of life is an extraordinarily potent reminder to treasure the present moment in all its richness. Carpe diem. 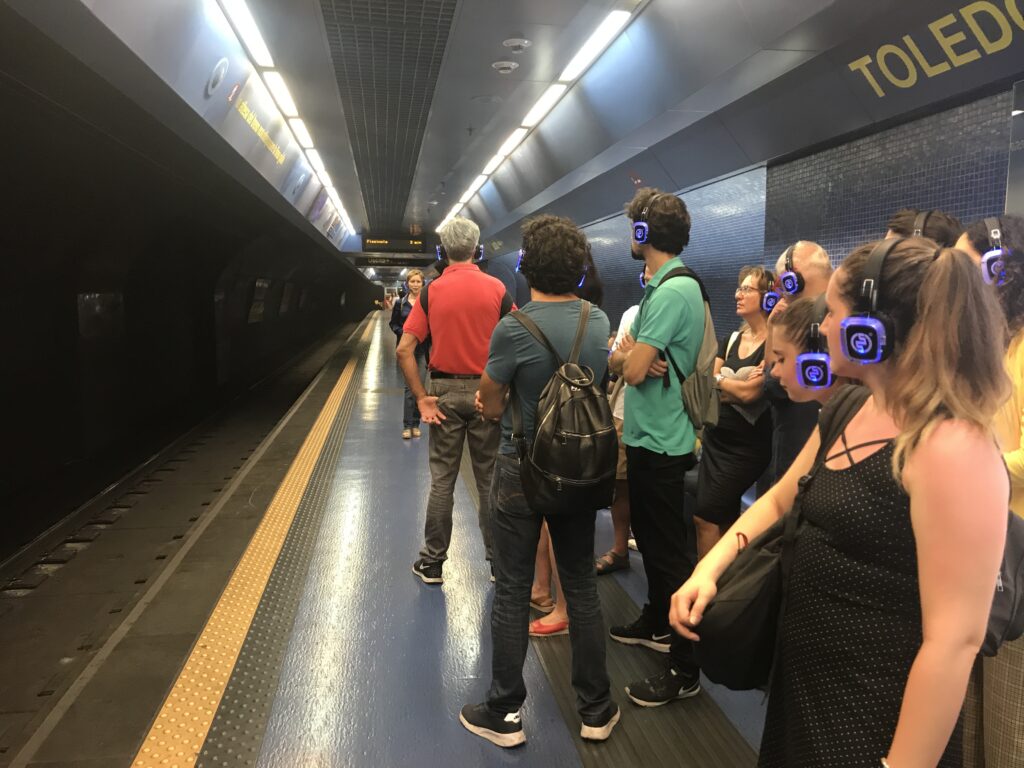 Underground takes us on an audio trip through the Napoli metro, and asks us to actually think about our subway ride(s): what does it mean to be underground, to spend so much of our time commuting back and forth, and to share a space with strangers? What do we mean to each other? How do we interact? Is this a private or public space? Reminiscent of Rimini Protokoll’s Remote X, staged in numerous cities, and This Is Not A Theatre Company’s Subway Plays, a podplay that takes place in New York City’s subway system, it is the latest addition to an international series of site-specific audio experiences that also include the work of Janet Cardiff.

We start at the Toledo stop and descend into the blue-tiled station that has been designed to make it seem as though we are going underwater. I think about how fish move, how they navigate around the other fish in their school, and how people navigate each other. The light in this station bounces off the blue tiles, and it does have a relaxing effect – as does the soft, reassuring voice of our philosophical guide (Roberta Bosetti) through this underworld.

She focuses in on community: “We are all together, we are all close to each other,” says our guide. We step onto Linea 1 and ride to Rione Alto. We are all going in the same direction, all of us dreaming, all of us part of a dream.

We take a moment to listen to the rhythm of the train, to look around at the others on the train, to make eye contact. She invites us to re-experience a world that is so familiar we have forgotten to pay attention to it.

Our guide points out the infinite possibilities of being on the train: we could get off at any of these stops if we wanted to. Sadly, creatures of habit, we usually get out at the same stop every day. In fact, we seem to take the metro at the same time every day and tread familiar paths. What would it be like to get out at a new stop?

Back on the platform, our guide reads Thomas Bernhard, but the quotation she has chosen reminds me of Beckett: “I can’t go on, I’ll go on.”

Later, she says: “Forgetting is a violence of the most subtle kind.” 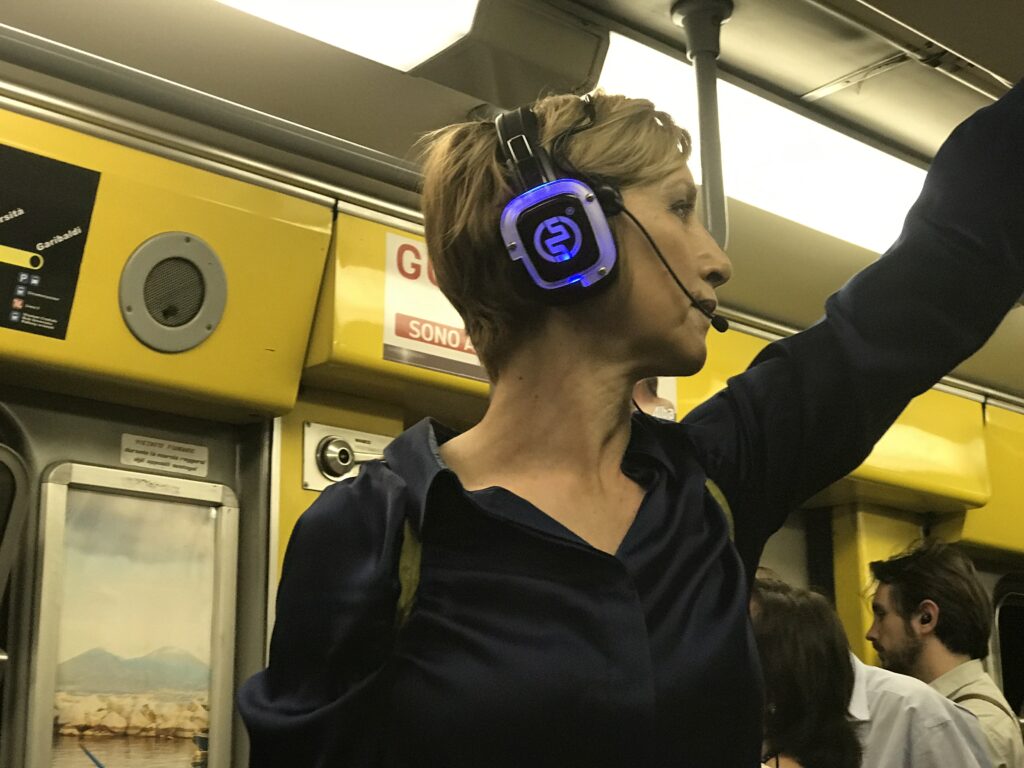 We ride to Vanvitelli, where we stand and watch people coming down the escalator: all the metro is our stage. Erving Goffman famously wrote that we are all always already performing in our daily lives, and indeed the people on the escalator are performing themselves as they wish to be seen by others in the subway – or themselves as they imagine themselves to be, or wish they were. We are all actors, all acting. The metro station is our set; the other people in the station are characters, and we are immersed in the ever-changing play that is Napoli at rush hour.

Back on the train, she asks us to choose, select, sort out from amongst all the plastic, iPhones, garbage, what is important. “Choose the future,” she says. “Choose life. When you go back to the surface, let your experience here remain with you.” We get off at Toledo, and she continues her journey, waving as the train disappears into the tunnel.

Based on the famous comic book series, this immersive show casts the audience as detective Dylan Dog — the fifteen audience members at every show wear Dylan Dog face masks. We are ushered into Dylan Dog’s parquet-floored office by his assistant Groucho, who, between jokes and trying unsuccessfully to demonstrate how attractive he is, outlines today’s mystery. The Client arrives to ask for our help: should she marry her dead sister’s fiancé? And what really happened to her sister? And we are on our way: Groucho leads us out of the office into the street outside Scotland Yard (complete with brick wallpaper and a London phone booth), where we meet Jenkins who is like Montalbano’s Catarella in a British policeman’s helmet: malapropisms abound, and he states the obvious at great length, while never reaching a conclusion. Jenkins takes us to Inspector Bloch’s office, and we are then ushered in to consult with psychic Madame Maria Trelkovski, who invites to sit on her lushly upholstered couch and sit with her at the dining table to summon the ghost of the dead woman. We meet Death in a spooky graveyard (complete with detached arm), and are then taken back into our own (I mean Dylan’s) office for the finale. The acting in this production was superb, and the settings rich with detail and ambiance. The actors were masterful at inviting audience engagement and interaction – and controlling it (we had a few rowdy teens in our group who were silenced with one stern look by the Madame Trelkovski). Fans of Dylan Dog will no doubt notice all the references in the costumes, sets, and props – such as particular books on bookshelves, and particular posters on walls (again, I’m trying not to give it all away). 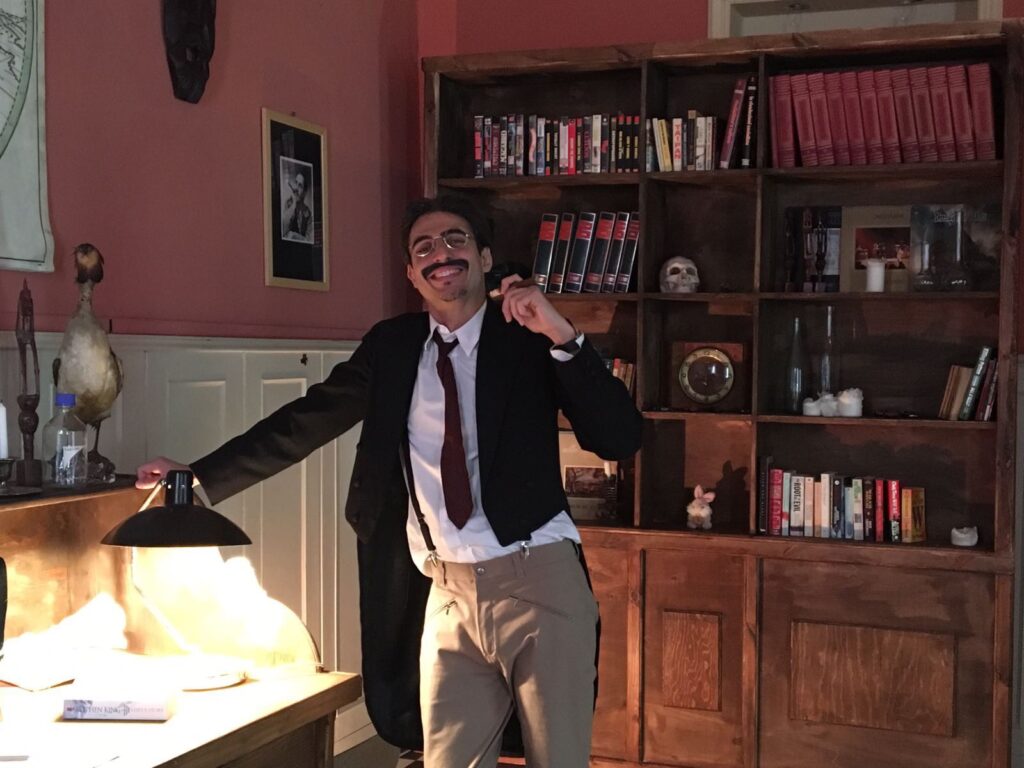 These three productions hold their own in comparison to any immersive, site-specific, and interactive theatre I have seen in New York, London, or Barcelona: it is time to put Napoli on the list of cities where excellent immersive and interactive work is taking place. Let the participation begin! 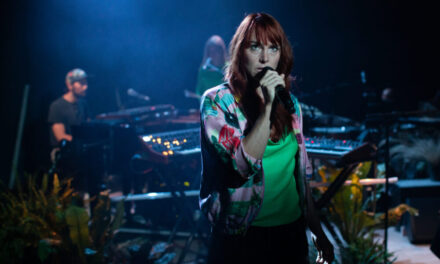