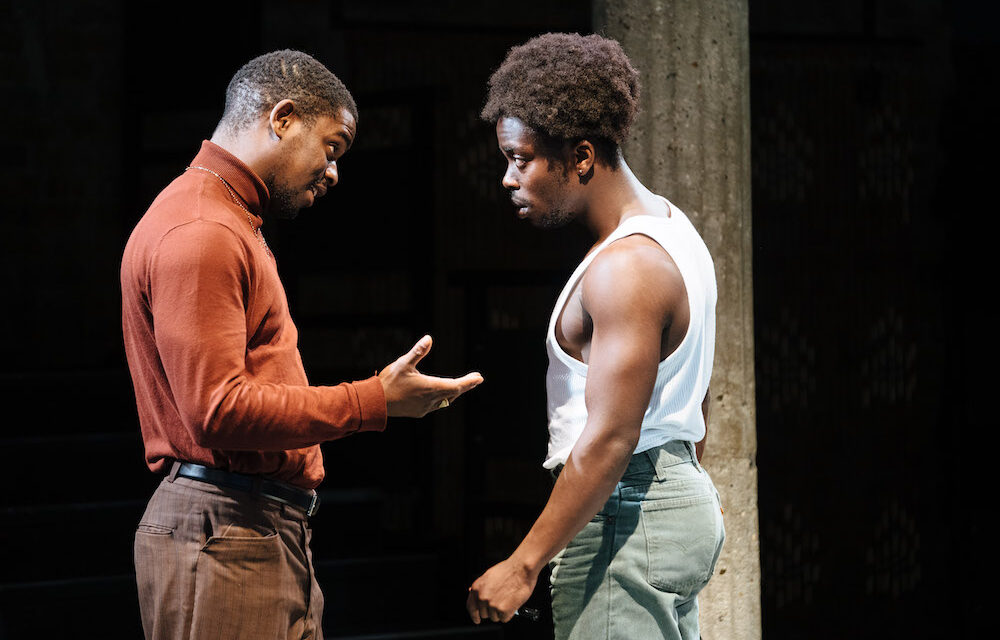 I’ve always been a bit sad that so many contemporary classics are so rarely revived. I have even offered up prayers that some theatre somewhere might stage a few more. And, guess what, every now and then my prayers have been answered. Maybe it’s Terry Johnson’s Hysteria at the Hampstead; or Andrea Dunbar’s Rita, Sue and Bob Too at the Royal Court; or the ongoing Passing the Baton season at the Bush. Having staged Winsome Pinnock’s masterpiece Leaving Taking last year, this venue is now reviving another great, if rather troubling, play, Caryl Phillips’s Strange Fruit, which originally premiered at the Sheffield Crucible in 1980.

Although it takes its title from the 1939 song by Billie Holiday, whose deeply upsetting imagery of blood and burning flesh evokes so powerfully the racist lynchings of southern American states, Phillips’s play is not about the Ku Klux Klan or segregation, but about the situation of black people closer to home. The plot concerns the West Indian diaspora as Vivian, who was born in the Caribbean, brings her two infant sons to England. But as Alvin and Errol grow up, she finds that she cannot understand their worldview. So, for her, the strange fruit of the story’s title is about the feeling of parents that their offspring, in this case the fruit of her womb, are alien to them.

The play begins in about 1980. While fortysomething Vivian works as a teacher, she shares with her oldest friend and neighbor Vernice a sense of incomprehension about their children. You can easily see why: Vernice’s teen daughter Charmain is apparently bunking off school, while Errol, who is a 21-year-old university graduate, refuses to settle down in a steady job. Instead he is active in radical black politics, and he treats his white teenage girlfriend Shelley appallingly. When, in Act Two, 24-year-old Alvin returns home from the funeral of their mother’s father in the Caribbean, he brings some unwelcome news about their family’s true history.

With impressive perception and intelligence, Phillips portrays the generational tensions between the migrants of the Windrush Generation, such as Vivian and Vernice, and their children, who have lived most of their lives in England. Both of the mothers have adapted to their new surroundings, but in different ways: Vivien is content to be a single mother while Vernice still searches for a good man. Vivien plays the role of the respectable English teacher, complete with RP vowels, while her friend is more chilled. By contrast, the pact between Alvin and Errol—who both want to rebel against British racist society and move to Africa—is shown as being strained by the older brother’s experiences in the West Indies.

Perhaps the fullest, most rounded, character is Errol. Angry, passionate, imaginatively contemptuous of everyone around him, he is a classic anti-hero. As he snaps sarcastically at his mother and girlfriend, you sense his impatience with British society, his hatred of racism and his dismissal of integration. His energetic espousal of the ideals of the “Back to Africa” movement are eloquent, if typically ill-informed. His violent attitudes also suggest a desire to make one grand gesture, which it’s not hard to see will clearly land him in jail. Can his brother save him from himself?

Maybe, or maybe not. Because Alvin has his own problems. What Phillips does so effectively is to show how the illusions of all of the family are shattered by the end of the play. This makes for an unsettling evening, but it is not the worst aspect of the story. In the second half, both sons turn on their mother, blaming her for their dissatisfactions, and the playwright seems to glory in their cruelty. In general, although all the women are represented as down-to-earth, perceptive and practical, their voices get less oxygen than the strident angry vocals of Errol and Alvin. It also has to be admitted that some of the writing is unnecessarily verbose, and the play runs for over three hours.

Although certain episodes are appalling to watch, there is no denying the power of the play. In particular, Vivien’s long monologue about the poverty and racist treatment she experienced in the past while looking for work is thoroughly heart-breaking. Similarly strong is the portrait of Errol’s rebellious feelings as he plans a strike of black people against racism, and articulates his illusions about being a leader such as his heroes Malcolm X or Huey Newton. Although there are some tender moments, they do get lost in the passages of rage.

I’m really glad to have the opportunity of seeing this classic, but I have some problems both with the masculinist tone of the writing and with the production. Director Nancy Medina presents the action on Max Johns’s empty stage, with a carpeted shallow pit, and several offstage areas. Without any furniture, the actors look lost on stage and there’s too much aimless walking about, and awkward fetching of props. But Medina’s strong point is her work with actors, and all of her cast deliver terrific performances.

Rakie Ayola’s Vivien has exactly the right amount of English mannerisms to annoy her sons, and her journey from teacher-like poise to psychological collapse is moving beyond words. Likewise, Jonathan Ajayi’s Errol is a convincingly passionate youngster, with clear suggestions of mental illness, and contrasts well with Tok Stephens’s calmer but equally angry Alvin. Nor are the smaller roles neglected: Debra Michaels gives the teeth-sucking Vernice some vulnerability as well as comic brio, while Tilly Steele’s Shelley is a masterclass in illusion and naivety. Strange Fruit is at times difficult to watch, but it is certainly worth seeing.

Strange Fruit is at the Bush Theatre until July 27.