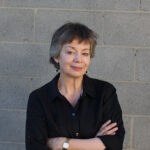 Laurie Fyffe is a playwright, dramaturge, and Artistic Director of Evolution Theatre. Her most recent work, Beowulf in Afghanistan is scheduled for the 2021 Ottawa Fringe. Other Fringe shows include The Secret Life of Emily/Frances (2015) and The Home Show, a collaborative work (2017). Her play Exciting Cause received a workshop in Ottawa courtesy of a 2020 Project Grant from the Ontario Arts Council.  Laurie’s plays have been produced at the Tarragon Theatre, Factory Theatre, Blyth Festival, and Theatre Kingston. From 2014 to 2017, Laurie was Managing Artistic Director of Ottawa StoryTellers (OST), where she adapted James Bartleman’s Raisin Wine (2014), and co-wrote A Winter Tale: The Journey of the Blind Harper (2015). In March 2018, her play Being Helen received a workshop and public reading courtesy of the Ergo Pink Arts Festival. Laurie has her MA in Theatre from the University of Ottawa, and is a member of Canadian Actors’ Equity and the Playwrights’ Guild of Canada. Since the fall of 2017, Laurie has taught at Algonquin College in the School of Media Design. She writes for Capital Critics Circle, Ottawa, Ontario, Canada.

Tarragon Theatre’s technological foray into the virtual reality of a Covid-19 lockdown begins with...

Kate Hennig’s The Virgin Trial is a stunner of a play. Hennig’s whip-cracking dialogue, laced with...

The first shock that lands from #Faustus is the language. Against the backdrop of a visual barrage...

Re-visiting Shakespeare is a perennial theatrical exercise, and Richard the Third’s malevolent...

In 2017, I came across the Ergo Arts Pink Festival with a mandate as follows: “Ergo Pink Fest is a...

Like pinpoints of light scattered across the map of shows, I have attended over thirty years,...