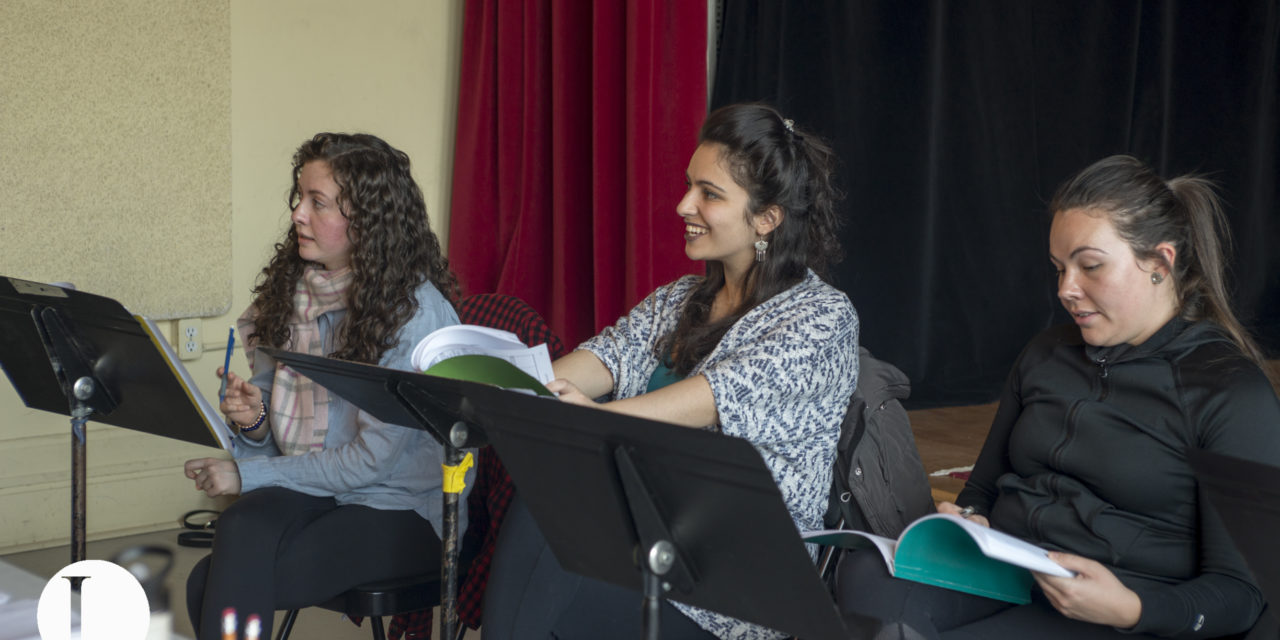 In 2017, I came across the Ergo Arts Pink Festival with a mandate as follows:

“Ergo Pink Fest is a 3-day theatre festival of staged readings in Toronto conceived and hosted by Ergo Arts Theatre. The idea for the festival was formed when Ergo Arts Theatre’s Artistic Director, Anna Pappas, read in the 2015 Equity in Theatre study by the Playwrights Guild of Canada that: The greatest disparity in gender equity happens in the playwright category. While some progress has been made over the past two years in changing the dominant voice in theatre, Ergo Arts is committed to continuing the push forward toward equitable and inclusive art.”

Plays submitted to Pink Fest need to pass the Bechdel test. Again, clarification on that: The Bechdel test is a way of evaluating whether or not a film or other work of fiction portrays women in a way that is sexist or characterized by gender stereotyping. To pass the Bechdel test a work must feature at least two women, these women must talk to each other, and their conversation must concern something other than a man.

So, I sent off Being Helen, a play I had just finished. Inspired by Euripides Helen, Being Helen is about the fate of Helen of Troy. But the action of the play draws a parallel between the fall of Troy and conflicts in our time. So, here I am, months later, anticipating a weekend of play readings by women playwrights, including Being Helen.

First up is Claire Ross Dunn’s The Women Of Casterbridge. The reading is directed by Diana Leblanc and the cast features Marium Carvell, Stuart Clow, Sergio DiZio, Catherine Fitch, Patrick Galligan, Kat Gauthier, Laura Schutt and David Storch. Oh, did I mention that the inspired and determined Anna Pappas got funding for Ergo Pink Fest. Dramaturgs, directors and actors, and the Festival’s stage manager are all paid. I am here partly at the timely intervention of the Great Canadian Theatre Company. GCTC awarded me an OAC Theatre Creators’ Grant when I submitted Being Helen to AD Eric Coates and dramaturg Catherine Ballachey. That money helped me finish the first draft.

Over 70 people show up for the reading of Claire’s play. By the time we start there is standing room only.

The Women Of Casterbridge is very funny. It’s been a while since I can remember the plot and characters of The Mayor Of Casterbridge, but I need no guide for Claire Ross Dunn’s story as we weave through some forty years in the lives of women caught up in this tale of love and betrayal.

(Stage manager for the entire Ergo Pink Festival was Scarlett Larry.) Everyone has experience with new play development, so while they are considerate and deferential, they are also sharp, picking out inconsistencies in the script and asking pertinent questions.

Tomorrow afternoon will be the first time anyone beyond the rehearsal hall has heard Being Helen. But let’s be clear. I wouldn’t be nervously awaiting the reading of a new play if it weren’t for Anna Pappas, Ergo Pink, and the Bechdel test.

Every now and then, in art, in politics, in life, an assessment is necessary. Usually followed by an adjustment. For women playwrights in Canada, that time has come around–again. Yes, there has been progress. We have many exciting female voices being staged in theatres across this country. But statistics don’t lie. Women are not less creative, less hard-working, or less capable of bringing a play to fruition than men, but the number of their plays being produced is less.

The Bechdel test is a tool, a tool of re-adjustment. Specific, and therefore specifically useful in looking at plays in which the female characters have agency. Of course, such plays have been written by men and will continue to be. But that’s not the point. Statistics are not the only issue. The playwright lies at the heart of theatre. The playwrights’ work dictates the conversation. The playwright brings us a worldview and a view of the world.

If this focus on women’s work brings just a few more plays to fruition, then it’s worth it. What’s the risk? That a good play by a man will be ignored? Not likely. Or that we might find ourselves in 2020 with plays by women staged in Canadian theatres outnumbering those written by men? So? Imagine a season in which female playwrights earned more royalty payments than male playwrights.

Now comes the real bearing down on the Bechdel test, where will The Women Of Casterbridge go next? Ross Dunn’s play has big parts for both women and men, with themes to match. It needs a theatre with resources.

As for the reading of Being Helen, I listened, made notes, and this play will get a re-write. But it wouldn’t have gotten a launch if not for the Ergo Pink Festival, Anna Pappas, and the Bechdel test.

This article originally appeared in Capital Critics’ Circle on April 7, 2018, and has been reposted with permission.