At the ongoing Theatre Olympics, Gujarati play Dhaad brought to fore the making and breaking of a tyrant

Jashwant Thaker Memorial Foundation, Ahmedabad brought to the 8th Theatre Olympics Dhaad in Gujarati. It was remarkable for its stark realism about the life of a brute dacoit and his three wives subjected by the dacoit to merciless cruelties. The rich production values, the aptly cast production, and the thrilling dances made the production arresting.

Written by Vinesh Antani and directed by seasoned actress and director Aditi Desai, the play is set in the desert of Kutch. Living in a barren landscape with little means to make both ends meet, the central character of the play Ghelo who takes a gun in his hand to confront economic distress on the advice of his maternal uncle to loot the rich who trade in human miseries. A little provocation transforms him into a tyrant, going around like a madman, desperate to identify his targets. Whenever he returns home after the heinous act of looting holding his gun, the people of the area rush to their homes to hide from him—such is the fear of Ghelo which gives him sadistic pleasure.

Unable to give birth to a child, he becomes furious at his wife whom he had duly married. Then he brings a second wife after making payment to her father. Again, she fails to deliver a child. Ghelo becomes all the more furious, abusing, and beating his wives. While in search of a third one, he is enamored of a young and beautiful girl and takes her away by force at the gunpoint in the very presence of her parents who raise hue and cry but everyone hides because of the fear of the dreaded dacoit. When he takes her home, she is abused and mercilessly beaten. Whenever she confronts the dacoit, she starts trembling like a leaf of a tree.

A new character enters the scene, a young man called Pranjivan, a law-abiding man from the city. Once he came across Ghelo and stays with him for a couple of days. Though they have different social backgrounds and different worldviews, they become friends. On the invitation of Ghelo, he comes to his village and shocked to see the true color of Ghelo and his caged three wives. Now that he is trapped by the dreaded dacoit, he has no choice but to obey the dictates of Ghelo. One night the dacoit forced the urban law-abiding guest to accompany him to commit robbery at the house of Daji Seth, who has earned huge money by exploiting the poor. Suddenly a calamity falls the dacoit in the course of looting precious things from the house of the rich man. He is struck by a brain hemorrhage and loses consciousness. The clever rich man starts taking back his rich jewelry tied into a bundle by the dacoit. However, the timid urban-bred young man suddenly steps into the dacoit’s shoes, takes the gun and carries the unconscious dacoit on his soldiers to his home. Now the third wife becomes bold, understanding the weak point of Ghelo. Gradually, the physically weak Ghelo loses his earlier aura of fear. 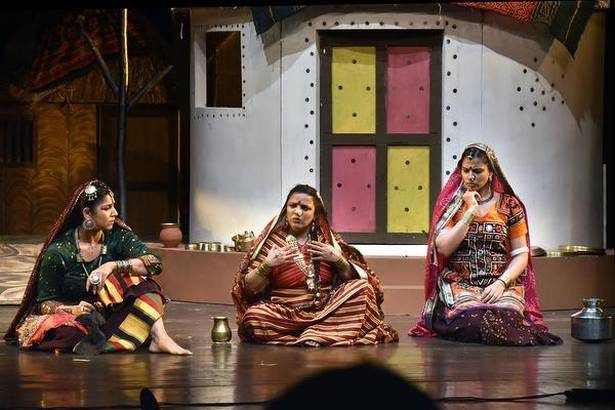 A scene from the play

The décor is aptly conceptualized which creates the required ambiance for the action. The beautifully performed dances are intricately woven into the narrative. These dances are performed by three wives of the dacoit when he is away. These terrorized women hardly communicate with one another out of the fear of the dacoit.

The play is unfolded by the urban-bred young man and the three wives as narrators. In the first half, we watch the acts of brutality by the dacoit who is in full form and in the second half when he is affected by a debilitating disease, remains bed-ridden, and nobody takes notice of his presence, much less terrorized.

In the second half, the early life of the dacoit is revealed in flashback scenes. It is the economic distress that forces him to take the gun at the instance of his maternal uncle to face a hostile landscape which produces little to feed its people and breeds ever-widening economic disparities between the rich and poor.

The bed scene in which young third wife comes to know that the seemingly all-powerful Ghelo is impotent which he has managed to conceal from his other two wives. Now she is transformed from a meek and frightened woman into a tigress, challenging him to show his manhood. This scene is indeed the tour de force.

All the events lead to the exposure of the Ghelo, both physically and mentally, leading him to commit suicide. The denouement with three women liberated from the clutches of the tyrant looking towards the vast outside world, holding lighted lanterns, their faces radiate with the glow of light.

Devaki Dave as Monghi, the young third wife of Ghelo, imparts vitality and intense emotional power to her portrait, making it unforgettable. Playing the role of Ghelo is challenging. Gaurang Anand accepts this challenge bringing to the fore the devilish traits of his character to the fore with telling effect. Ankit Gor as Pranjivan as a narrator, who steps out of his character to participate in the action, mostly remains an outsider and only once he holds the gun to save the life of his friend–Ghelo.

This article originally appeared in The Hindu on April 6, 2018, and has been reposted with permission.