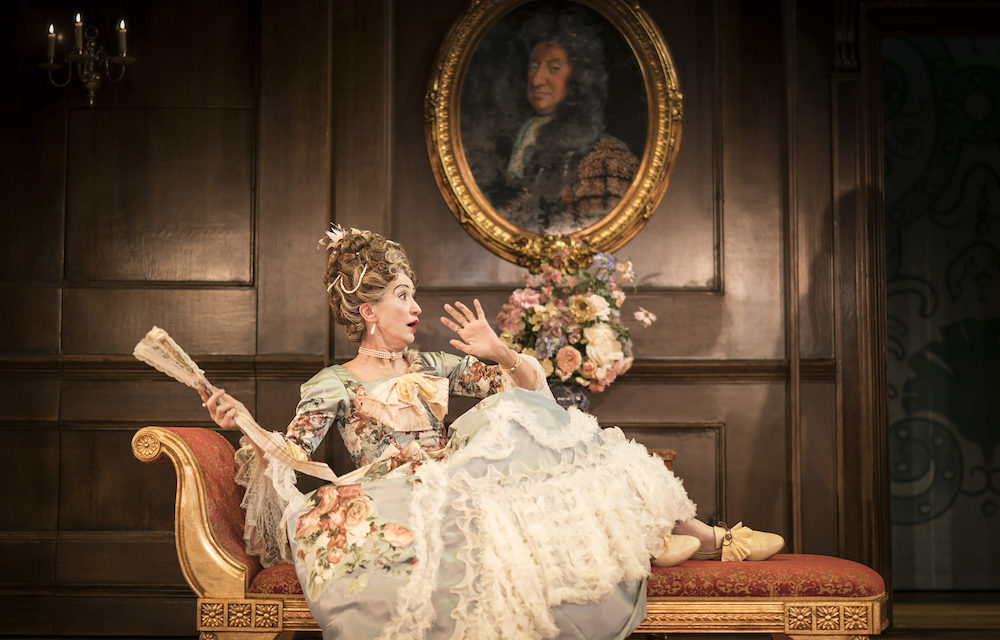 Haydn Gwynne in "The Way Of The World" Photo: Johan Persson

Let us have a quick moan about repertoire. You know, the types of plays that most of our theatres put on. It says something about contemporary society when certain kinds of plays are no longer staged. For example, it is now very rare to see postwar verse drama, maybe because we now find it too artificial, and perhaps because there are too few actors who are good enough to deliver it. Likewise Restoration drama: plays from the years following the return of Charles II from exile in 1660. These include major works of theatrical merit by superb writers such as John Dryden, Aphra Behn, William Wycherley, John Vanbrugh, and George Farquhar.

And of course William Congreve. His The Way Of The World, first staged in 1700, used to be a theatre standard, but is now rarely performed. The reasons are obvious: its plot is convoluted, its language complicated and its view of the world is alien to us today. But isn’t this precisely why we have subsidized theatres? To keep alive difficult drama? Why is the National Theatre not putting more of these plays on? Step into the breach the Donmar Warehouse, with Congreve’s best play in a superlative production. Now that Wycherley’s The Country Wife has just opened at the Southwark Playhouse, perhaps it’s time to reassess the playability of these vintage comedies.

Unlike The Country Wife, which has been transplanted to the Roaring Twenties, The Way Of The World remains rooted in its original historical setting. At its heart is a story about a couple learning to love and respect each other. A young man about London town, Mirabell (his name suggests that he admires women) is in love with Millamant (her name suggests a thousand admirers). But to marry her he must first win over her aunt, Lady Wishfort, who controls the young woman’s estate. At the same time, another gentleman, Fainall, and the widowed Mrs. Marwood, once rejected by Mirabell, plans to cheat Lady Wishfort and Fainall’s wife out of their fortunes. Well, I did say it is complicated.

It has to be said that even in James Macdonald’s production, which is a model of freshness and clarity, the plot is tortuous (unless you know a lot about early 18th-century inheritance law). And it’s inevitably a verbally excessive evening, with lots of exchanges that convey information about the plot: if you lose concentration for a moment, you’ll miss a vital point. On the plus side, a lot of the wit is based on clever phrases and insults—which are pretty timeless. As is the courting of Millamant by Mirabell: despite their sometimes spiky exchanges, they are both seeking equal rights, a thoroughly modern idea.

The classic scene at the centre of the play, so delicate and delightful, is the prenuptial agreement between Mirabell and Millamant. This couple embodies the ideal attitude, intense yet balanced, love, based on both mutual esteem and pride in self. Most dear to Millamant is her independence: “My dear liberty, shall I leave thee? My faithful solitude, my darling contemplation, must I bid you adieu?” she asks, before laying down her conditions for marriage. But Mirabell has conditions of his own, making clear how he expects his future wife to behave—basically by avoiding the scheming, gossiping, and chicanery common to polite society.

Because of late-17th century changes in the moral climate, powered by religion and by the desire of the middle classes to be respectable, The Way Of The World has more romance in it than the lecherous fare typical of the earlier Restoration period. But that doesn’t mean that there are no problems when it speaks to us across the centuries. After all, it’s a reminder of a world where women had to struggle to remain independent after marriage, where affairs were tolerated for men but ruinous to the reputation of women, and where property was an essential part of any calculation involving the amorous emotions. It is also a place that, despite its wit and gallantry, is savage in its prohibitions and callous in many of its assumptions.

In Brexit Britain, I can’t quite shake off my current obsessions. I keep seeing the plays of the past through the distorted lenses of our present political preoccupations, and you can’t get much more political than the Brexit process. So my interest picked up when Sir Wilfull Witwoud arrived on stage. He is a stock character, of course, the country bumpkin. In this play, he’s a hearty Shropshire squire who gets drunk, sings patriotic songs and insults Turks and Muslims. The sophisticated London characters—aka metropolitan elite—despise him as an oaf. But for me, with his prejudices and national pride, he seems to be the common ancestor of the prototypical Leave voter.

Like Ian Rickson with his The Birthday Party, Macdonald treats this classic as if it was a new play, with the result that every scene and every exchange feels as if it has been thought about carefully. There’s a freshness to the performances and no character feels stereotyped—instead, there’s a welcome spontaneity to the acting. Justine Mitchell shines as the volatile Millamant, radiant to the outside society and amused on the inside, while Geoffrey Streatfeild as Mirabell is crisp, brisk, and charmingly efficient. Hadyn Gwynne steps into the part of Lady Wishfort with enormous comic brio, but also constantly reminds us of the human being underneath the excessive make-up and social pretensions. She is also very funny.

On an elegant set that never distracts you, designed by Anna Fleischle, the other members of the cast have plenty of room for their plots and pomposities. Tom Mison and Jenny Jules lend Fainall and Mrs. Marwood a lively deviousness and some real heartless rapier-like steel. And Fisayo Akinade as the verbally incontinent Witwould, Alex Beckett as the servant Waitwell, Sarah Hadland as his wife Foible, Simon Manyonda as the quarrelsome Petulant, and Christian Patterson as the comic country squire Sir Wilfull are all excellent. This is stylish, yet thoroughly accessible, production that is full of energy and a joyous satirical thrust that never obscures the real human emotions at the story’s core. Let’s hope that this production is the first of many Restoration revivals.

The Way Of The World is at the Donmar Warehouse until May 26.

This article originally appeared in Aleks Sierz on April 5, 2018, and has been reposted with permission. 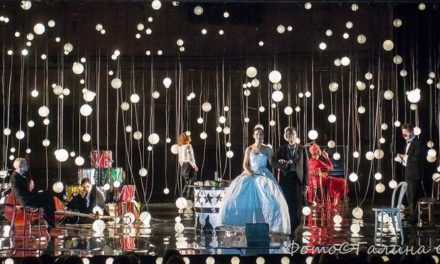 Yury Butusov’s “Drums in the Night” at the Pushkin Theater