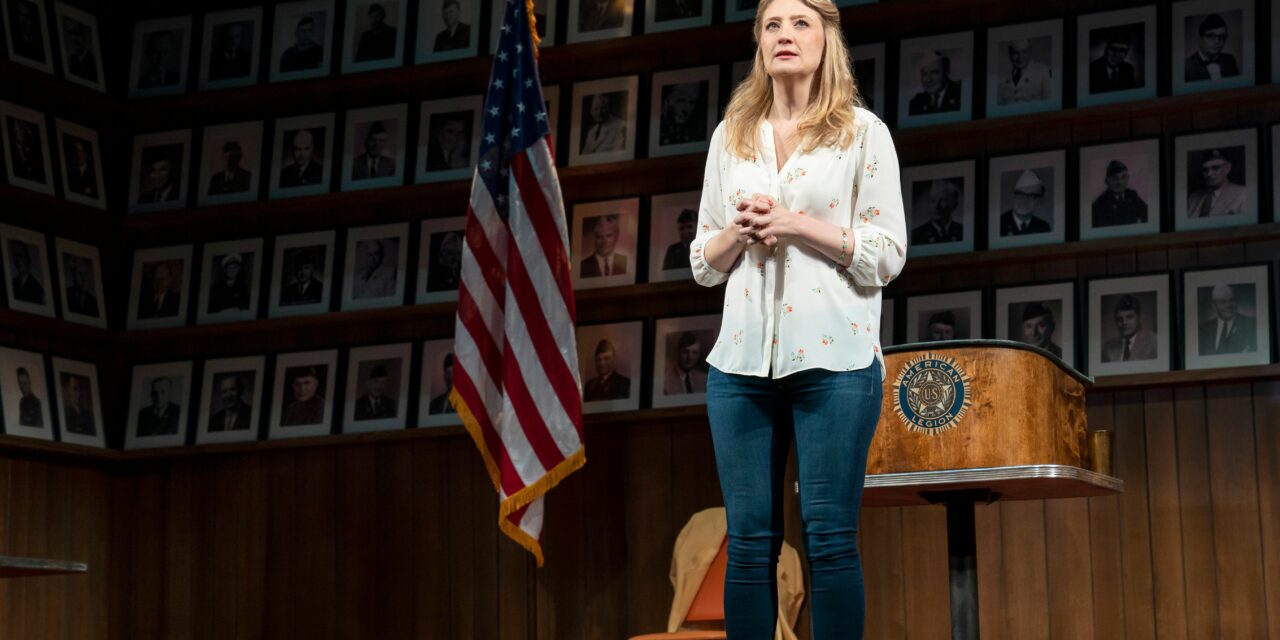 Heidi Schreck in her autobiographical play "What The Constitution Means To Me," now open at the Helen Hayes Theatre on Broadway after an acclaimed run at the New York Theatre Workshop. Courtesy of Joan Marcus.

In Heidi Schreck’s hands rests a divine power which only the best of storytellers wield to purge the condition of being human, able in an instant to throw her audiences into radical reflection of who they are in the face of God and country. Or maybe it’s some great civic sword that she carries, harnessed only by liberty and democracy’s most attendant participants to reshape, again, a populous and its idea of government. She is a Brutus whose wisdom, unlike that of the tragic hero, knows both its power and place.

What The Constitution Means To Me, Heidi Schreck’s breathtaking, autobiographical exorcism of an American civic ethos, which opened on Broadway this Sunday, is unafraid to tear up the document it reveres, possessed by a competing love and disdain for the possibility of American governance, a dedicated civic virtue bound to consume itself. Like Brutus, both the play and its creator are bedeviled by virtue and duty, conflicted by equal patriotism and disillusionment, entangled in a strikingly personal battle over the democratic self — over what it means to be a citizen and, for Schreck, an American.

When Heidi was a teenager she toured the country, one American Legion post after another, competing in speech debates about the Constitution for scholarship money. (She later paid for her college tuition with the winnings). What The Constitution Means To Me, directed by Oliver Butler and coming to Broadway after an acclaimed run at New York Theatre Workshop, takes her audience back to that time, to the paneled and patriotic interior of a Legion hall. It’s in this dream space where Schreck resurrects that fifteen year old self, questioning exactly what about the U.S. Constitution so filled her mind with inspiration and promise, and ponders, armed with the hindsight and maturity of an adult who understands her past, what that promise has fulfilled.

The room to which she brings us, an imagined American Legion in Wenatchee, Washington, its walls covered in photos of Legion veterans — all white and male — has no doors (scenic design by Rachel Hauck). She’s joined on stage only by one strict legionnaire and moderator (played by Mike Iveson, who also steps out of character to reflect on American liberty as a gay man). There’s no exit, no passage to flee this imaginary place, and in her mind I imagine this construction holds particular importance. The professed goal of the American Legion is to “foster and perpetuate a 100% Americanism” (check their constitution’s preamble), and the weight of what being an American has meant for the majority of our country’s history — white, male, and property-owning — literally traps her in this space. The Constitution is a living document — a crucible, a boiling pot of conflict and contention, as her fifteen year old self figured it — but it’s also a deeply troubled one, marred by ambiguities which men in those categories have used countless times to bury others, women and people of color, queer folk and immigrants, in rooms like this one. To dig herself out, Shcreck must go to battle with the document, with the moral and political ethos of our country and ourselves, to carve out a place for herself within its words — or not.

Oscillating between recollection and reenactment, debate and political theory, open conversation with her audience and a constructed descent into the trauma which has plagued both her and her family, What The Constitution Means To Me is necessary theater for anyone interested in the human spirit and how it might survive our contemporary political moment, in the limits and possibilities of our democracy and the troublesome fibers of racism and intolerance, sexism and violence which hold our common history together.

When the French aristocrat Alexis de Tocqueville travelled to the fledgling United States in the 1830s and wrote Democracy in America, the modern world’s most influential political ethnography, he was struck by the civic mind of the American, a certain and distinct democratic ethic that seemed to define citizens of this country. He was intrigued that American life was, unlike in Europe, not dominated by the ubiquitous presence of an unwieldy government but by a shared and active awareness of democratic liberty, manifested in the civic acts of the private citizen. Things like reading newspapers and joining the fire department, belonging to the American Legion and participating in local politics.

His observation was misguided, of course. He seemed to miss, for example, that the civic practice of reading a local newspaper was supplanted by a far-reaching federal postal system, in the abstract a national constitution daily at work in securing the free press. But we shouldn’t judge the frenchman too harshly; his mistake illuminated a unique characteristic of American civic life, one which What The Constitution Means To Me excavates with heart-stirring precision.

To be an American means to live at a delicate intersection of the personal and the public. We are told myths of rugged individualism — the pocket constitution Heidi carried around the country as a teen and which appears onstage with her nightly is aptly called “Your Rugged Constitution” — and indoctrinated with a certain self-determination, the right to privacy a fundamental parcel of the American identity. But we’re also part of a far-reaching democracy, those personal rights enshrined in federal law. The private, for better or worse, is inexorably entwined with the public making of our government. As Heidi narrates, for women, and especially for women like those in her family who’ve been routine victims of domestic violence or have needed abortions, this uncomfortable American rejoinder of the personal and public is a harrowing fact of daily life, the function of their bodies routinely a matter of legislative debate.

Like the autobiographical self, which must stand as both unique and universal (as Heidi does so brilliantly and bravely), the American civic self must be both independent and democratic. What is so impressive, at times hair-raising, is this play’s sobering ability to tease out this balance, to expose the perversion and beauty of an ever-negotiating American identity. 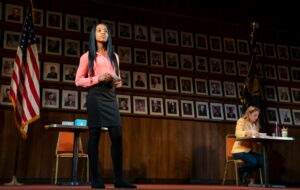 Thursday Williams and Heidi Schreck in “What The Constitution Means To Me.” Courtesy of Joan Marcus.

If you tweak this balance slightly, if you pear in between its cracks, you end up with something inching toward revolutionary. Heidi concludes her play with a simple, radical question: should we abolish the U.S. Constitution altogether, owing to its purposeful and aged polysemy a history of American atrocity, and forge a new one altogether? Not asked ironically, but sincerely and venerably, this question posed before a Broadway audience is a revolutionary and radical achievement. Somehow it doesn’t feel so bad.

I once took a course on Free Expression. On the last day, after studying the intricacies of the First Amendment for an entire semester, the professor stood before the class and burned an American flag. In silence, we sat teary-eyed before the flames — moved by such visceral emotion not because we’d done something that seemed wrong, but because in that moment we’d experienced the awesome power of American liberty. I remember that feeling distinctly, how it welled up in my stomach, and I felt the same sitting before Heidi Schreck.

She brings her audience to this place with such exact and ingenious subtlety. What’s most innovative about this play is its form. There is no separation between Heidi and her audience. She performs the play as herself, invites her audience to be themselves in their seats and converses with her public openly as she meanders a closely constructed (though you wouldn’t know it without reading the script, her delivery so natural), often hilarious narrative of personal communion with the Constitution. When she arrives at this penultimate question there can be no doubt that is asked only out of studied respect, tinged with a necessary, admirable and credible urgency.

To help find an answer she brings Thursday Williams (who alternates performances with Rosdely Ciprian) to the stage, a senior at William Cullen Bryant High School in Queens and, like Heidi, a debate champion. Together, in the spirit of the show, they hold a live debate — “keep” or “abolish.”

It’s a particularly rewarding rhetorical device to conclude this play. Thursday Williams is a dazzlingly intelligent young woman, a hopeful and comforting symbol of how young people, young women and especially young women of color will transform this country, and a breathing embodiment of the call to action with which this show must intuitively end. Heidi and Thursday are a perfect match-up, and at the performance I attended Thursday defended the “keep” side of the argument.

Picked at random, an audience member delivered the verdict to keep, not abolish the U.S. Constitution. This is a play, it’s theater and entertainment, the dilemma an invented one – but the moment gripped each of us, privately. This is how we cast our vote, not just persuaded by the impressive intelligence of Thursday Williams, but roused by Heidi to consider those words “We, the people” seriously and devotedly. I wondered which answer Heidi hopes to receive, the verdict surely dependent on the eccentricities of each performance and the broad demographic of a Broadway audience. But I suppose both achieve the same result; each answer is a commitment to work at improving our democracy, to making this country a better place for all, delivered by an audience not fed bitter medicine, but transformative and soul-stirring theater. 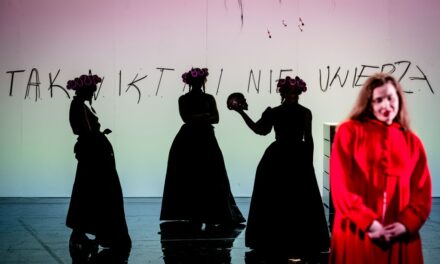