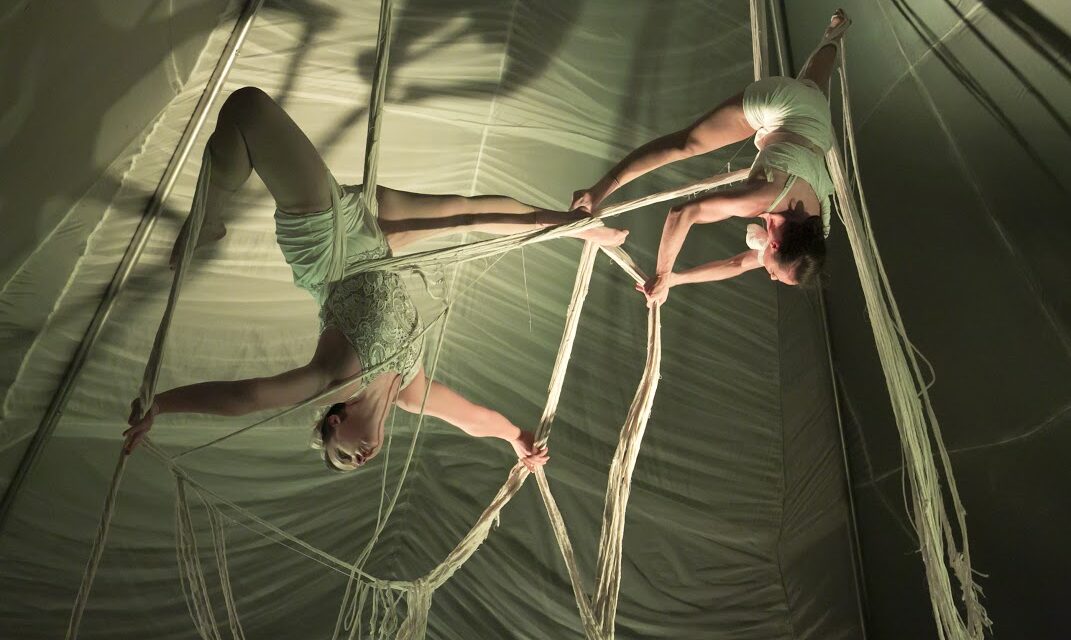 The intimate and mesmerizing Brave Space is a circus performance unlike any other you may have experienced.

The show starts with a “floof” of white parachute fabric in the air (I think “floof” is a technical term for this company, which already tells you something about their vibe and aesthetic). That “floof” is the signal to the audience to enter the space and surround the pool of fabric that has now settled on the floor. Slowly, figures begin to move under the fabric, creating shapes that are amorphous at first, but which gradually take form as the beginnings of a tent, with a set of trapeze poles in the center. 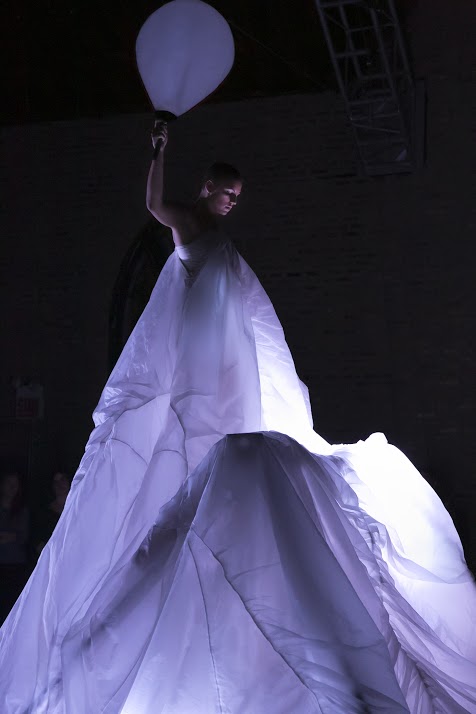 A figure emerges on top of the trapeze bar; other members of the ensemble steady an eight-foot-high vertical pole in front of her and she steps on to it. She’s no more than 10 feet from the nearest audience member–we can see in her effort just how crazy-hard it is to balance on the tip of a pole, and we can also see the collective concentration and attention of the other six members of the ensemble, who are all focusing intently on her, and breathing with her, as she steps from pole to pole while they hold them upright. At some point, she falls, is caught, and lovingly embraced by her co-performers. The lyrics in the background chant “You are safe,” and–risky as the maneuver we’ve just seen actually was, it’s clear that she was safe–to fail, to fall, to risk, to try–in this space of communitas and care.

That first pole-walking act (performed by Sarah Tapper) sets the tone and quality of the hour of circus routines that follow, which include juggling (Tapper), hula hooping (Natalie Abell), a Cyr wheel act (Hayley Larson and Zoe Sheppard), pole acrobatics (Heather Dart), a duo trapeze routine (Rachel Webberman and Hayley Larson), and aerial “rope” work with an unusual pair of multi-stranded ropes (Linnea Ridolfi, Zoe Sheppard, and others). All of this takes place inside a tent that the audience helps to build, right after Tapper concludes her pole-walking number. With coaching from the performers and from creator/director Shayna Swanson (who controls the haunting music, and the moody lighting, from an iPad strapped to her forearm), audience members lift the silk, slide inside the parachute bubble, and sit on the floor to watch the rest of the circus.

Everything the performers do from this point on is extremely up close and personal, and they interact with each other and with the audience with a generosity and openness that makes everyone in the tent feel present, welcome, and included (out of necessity!). At times, audience members are asked to help out–I was handed a couple of hula hoops to hold at one point; others were conscripted to hold up poles or help tie back ropes. At others, they are nudged to move or change positions: for the trapeze act, for example, we were urged to lie on our backs, which made the aerial trapeze work simultaneously more thrilling (if one of the performers were to fall, we were, in a sense, her living “mat”) and more relaxing (the recumbent position eliminated neck strain).

Where most circus performances seek to dazzle with superhuman feats of credibility-defying agility and power and flexibility and daring, Brave Space has an altogether different allure: this is a circus without ostentation and showiness, one in which the performers seem interested in creating and sharing an experience of precarity, courage, and other-directedness rather than simply wowing an audience. Indeed, at the end of a few of the routines the audience forgot to applaud–not because we were unimpressed, but rather because the performers finished with such humility and calm that applause felt out of place; it would have been like applauding someone who had just humbly handed you a gift they had carefully crafted just for you. 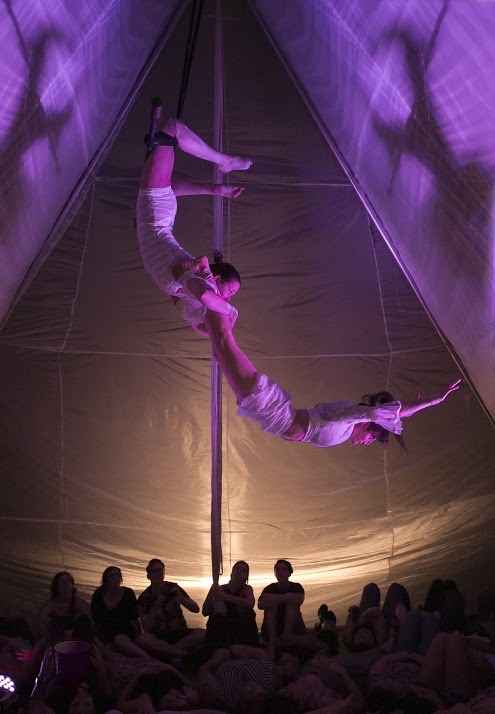 Consequently, as remarkable as the circus artistry here is – and it is skillful, daring, agile, innovative, and breathtakingly beautiful to boot–what sets Brave Space apart, and makes it magical, is the care the performers take of each other and of their audience. They allow themselves to be vulnerable–to each other, to the risks of their craft, to their audience’s judgment–and they invite the audience to share in that vulnerability. I was utterly enthralled watching these seven women–women who didn’t seem superhuman at all, but mere mortals just like me–take risks, be strong, and hold and carry and catch each other, but what most stuck with me after the show was the serene way they made eye contact and smiled at each other, and at us, throughout the performance. These were smiles that seemed to hold the secret to forging a space of care and connection, and I left with the impression that these artists wished nothing more than to share that secret with all those of us who had come together to build that little magic tent with them.

This article was originally posted in The Pittsburgh Tatler on March 25, 2019, and has been reposted with permission.