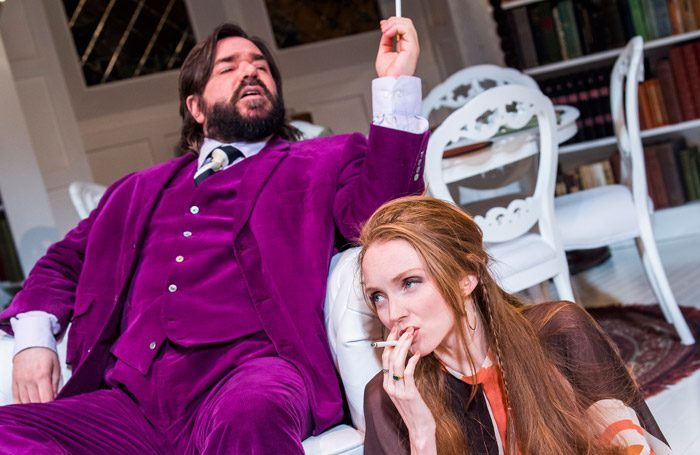 One good reason to visit the theatre is to see stars in the flesh. And some of the biggest celebs are familiar to us from television. So what should a savvy producer do? Well, put on a popular play and stuff it with television actors. There is only one potential problem: can the small screen actors come alive on stage? After all, it’s one thing to say a few words in front of a camera; it’s quite another to hold a live audience for a couple of hours. As the cast of this revival, directed by Simon Callow, of Christopher Hampton’s 1970 smash hit, The Philanthropist, all too aptly demonstrate.

First the hype. The stage is so full of stars that there’s almost no room for the furniture: look, there’s Simon Bird, for ever engraved on minds of viewers as the nerdy Inbetweener. And isn’t that Lily Cole, the model and entrepreneur? Oh, and what about Charlotte Ritchie, from Fresh Meat and Call the Midwife? And how about that Matt Berry, so familiar from Toast of London? Yes, they are all here cluttering up space in what — it pretty soon becomes clear — is one of the most inert shows currently on the London stage.

This is a pity because Hampton’s play, as a 2005 Donmar Warehouse revival starring Simon Russell Beale and Danny Webb proved, is interesting, if a touch dated. But then, Russell Beale and Webb are fine actors. Written at the age of 23 as a kind of response to Molière’s acerbic The Misanthrope, The Philanthropist imagines a central character, the Oxbridge philologist Philip (Bird), who is so compulsively nice that he plunges his closest friends into more confusion than anyone who hates humanity.

Billed by Hampton as “a bourgeois comedy,” a deliberate smack in the chops to the Royal Court (which first produced the play), the story concerns Philip’s relationships with his colleague, another don called Donald (a fresh-faced Tom Rosenthal), and his fiancée, Celia (Ritchie). At the start of the play, they look like a bunch of smart and rather witty young academics; by the end, at least one is suicidal. The catalyst for Philip’s problems with Celia is a dinner party, attended by the bullying novelist Braham (Berry) and the college’s sexual adventurer Araminta (Cole). When Philip, not wishing to offend by saying no, agrees to spend the night with Araminta, he provokes a crisis in his relationship with Celia.

As a satire of university life, some aspects of the play feel rather dated. But as a picture of a group of privileged and rather indolent youngsters it does retain an edge. Here, the jokey wordplay and sense of being cut off from the outside world, which is wilder and more unpredictable than any of the characters think, feels exactly right. It’s an adequate satire of middle-class intellectuals in an age of social crisis. But while the dialogues should catch fire on the stage, here they merely stumble from one subject to another without any flair or warmth.

The sexual politics of the play are very 1970, which was the year in which Germaine Greer’s The Female Eunuch was published, and very male. Amid the general air of promiscuity, Araminta explains her compulsive need to sexualize her relationships by reference to being abused as a young teen, and then having been held captive for weeks by one of her first boyfriends. Especially in a light comedy, material like this has to be tackled carefully because it risks trivializing a serious issue. Sadly, Cole is unable to do this; she looks quite decorative, but she has little emotional range.

The same is true for the rest of the cast. Bird can be very funny, especially when he articulates some of Philip’s more academic preoccupations. Seeing him sitting with his knees pressed together he is the very image of the neurotic intellectual. But his performance only knows a couple of variations, which is not enough for an actor who is on stage for most of the show. Rosenthal’s Donald is uniformly bright, but his sunniness at times almost eclipses Bird’s. Berry’s Braham, despite a fabulously bright cerise suit, is oddly lacking in lustre. The best actor is Ritchie, whose Celia mixes cool ambition and deep frustration with Philip’s emotional illiteracy.

All this is very disappointing because the play remains relevant: in the background, a lone terrorist assassinates the Tory prime minister, and this resonates with our current culture of fear, while a group of fanatics have pledged to murder the nation’s top novelists. Cultural terrorism. The figure of Braham, who is provocatively un-PC in everything he says, has not aged badly, while the idea that universities are full of highly privileged but socially useless teachers remains a challenging idea. Although the Donald character, who boasts of being enamoured of “easeful sloth”, is less common now, Philip’s key phrase — “I haven’t even got the courage of my lack of convictions” — retains a ring of truth.

And Hampton’s central point, that a compulsion to be nice and think the best of people, can be as destructive as its opposite still comes across strongly. Within a few minutes of the play’s start, Philip’s pleasantness results in one character’s shocking death, while his moral weakness and emotional flaccidity brings him nothing but despair. In this version, however, the combination of Callow’s leaden directing and Libby Watson’s shining white set, tends to emphasize style over substance, making a thought-provoking comedy into a rather frivolous and limp evening. What should have been an intellectual firework is here a damp squib. So much for star casting.

The Philanthropist is at the Trafalgar Studios until 22 July. 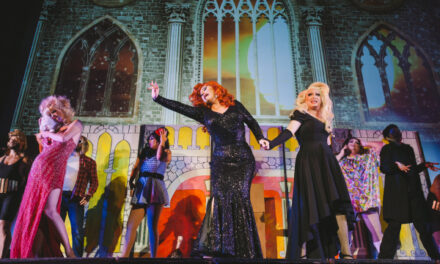