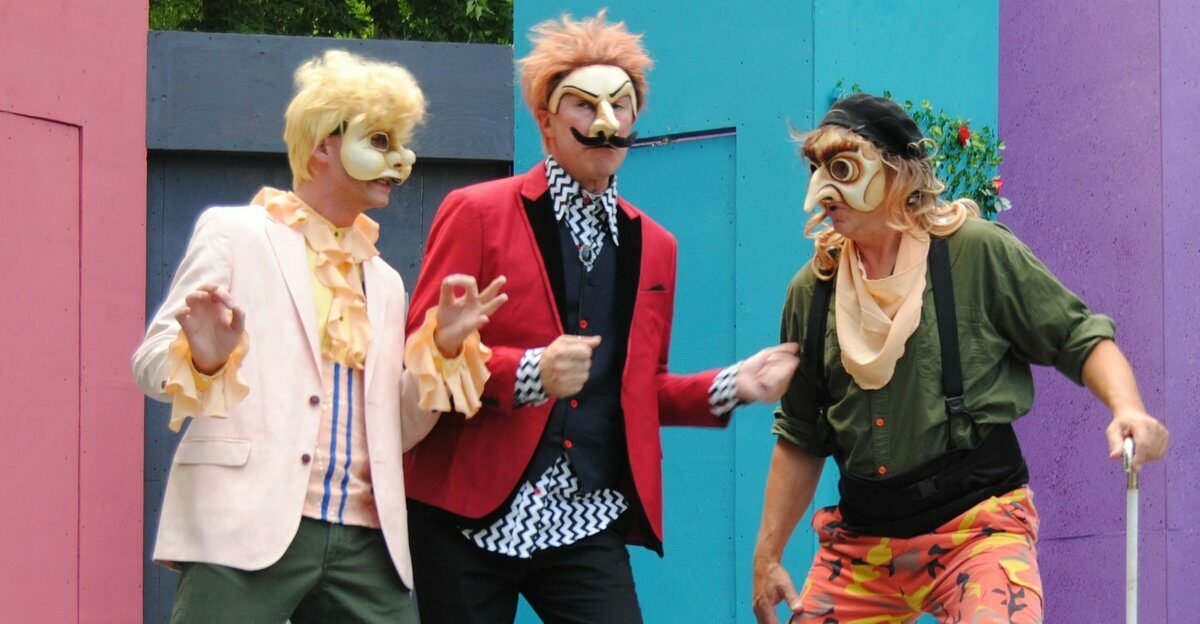 The Bonds of Interest is thought to be Jacinto Benavente’s most important play because it bridged the gap between the 19th Century Spanish melodramas, playful French inspired commercial forms of musical theatre, patriotic nationalism and uncritical visions of Spanish Society, by rejecting the bourgeois  festive theatre that hid Spain’s real problems of that period.  (See The Cambridge Companion to Modern Spanish Culture) Towards the end of the Century, the war had drained Spain and left its Spanish American colonies, Cuba and Puerto Rico in ruins.  Benavente’s play operates against a background of this devastation by transforming Spanish traditions of the stage, especially the Siglo de Oro and the Italian partially inspired by commedia classical theatre, into a viciously critical form of theatre that made nasty fun of the rich, that exposed the plight of the poor, that taunted the false values of those with money.

Yet, even though his play was very controversial when it first appeared at the beginning of the 20th century, it was also hailed by many as a chef d’oeuvre because of the way it gave theatre a new critical eye.

From our perspective, it has given rise to a contemporary renewal of the Commedia dell’arte in a context where the Odyssey Theatre is rethinking its own form of staging.    The coincidence is remarkable and for that reason, this author was well chosen.  Benavente has arrived to save the day! Along with translator Catherine Boyle, dramaturg Laurie Steven, and the whole talented production team that has contributed to this event. The  acting style has evolved, the masks have taken on a new life, {Clelia Scala)   the conflicts are lively and aggressive and somehow corporeal theatre has a lot more serious substance which is revealed in many ways,  especially in the sources of corporeal acting which was evolving at that period in Europe: mime, popular theatre, physical training and silent film which interested Meyerhold .

The prologue brings in a sudden wild invasion of strange creatures with strong commedia -style masks, bright colours, a flurry of hair, all wrestling for money and pushing each other around, symbolizing the main theme of the evening, the struggle for wealth, and the need to use any means to attain it. The prologue also emphasizes the fact that these individuals have no specific national affiliation but are human creatures caught up in a crooked world in ruins.

We soon meet the main protagonists, two rogues, Crispin and Leandro, who have travelled the world sponging off the wealthy and now plotting a new strategy to get their lodgings paid for while making a fortune at the same time. Crispin (Ross Mullan) is the brains of the system, passing off as Leandro’s servant. Leandro will play the role of the rich lord, who hesitates to go along with the scam but eventually accepts until his feelings for the beautiful Silvia, force him to  change his behaviour so radically that he ultimately feels he must sacrifice the bonds of money for the bonds of affection to gain true happiness, but not until a lot of damage has been done and much scheming has succeeded. 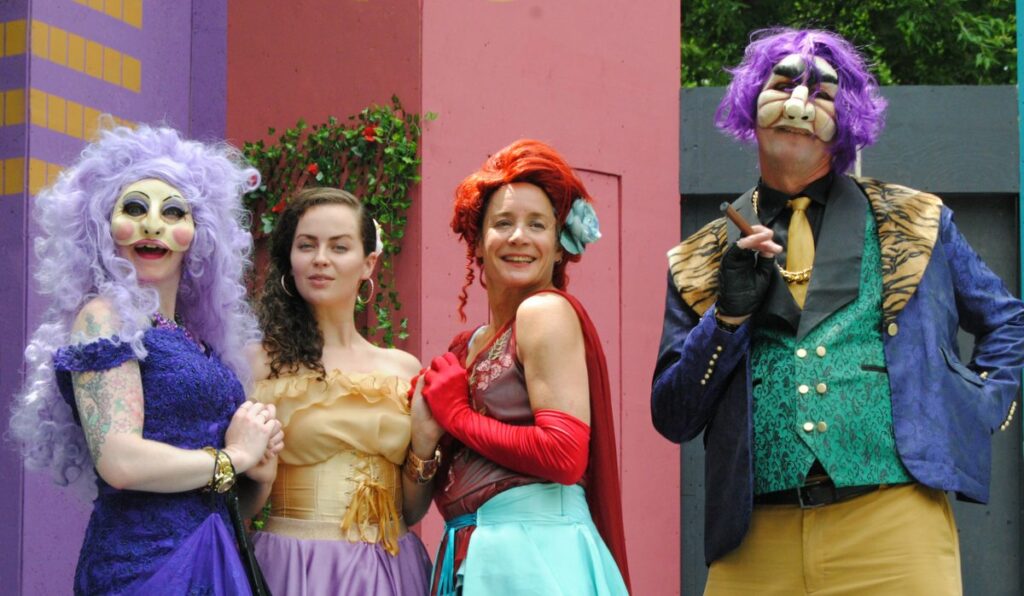 Thus the play  weaves in and out of nasty, crooked dealing and multiple, despicable individuals setting up  sub-plots to lie, cheat and steal and squeeze money out of the rich while Leandro  does his best to follow Crispin, the arch manipulator   and most violent, lying  sneak, by letting himself be convinced that  Crispin’s  plans will succeed.

However, the secret of this production is clearly the magic of the staging which works most of the time and which allows the company to renew its basic commedia values while investing in new performance strategies, new collaborators and very talented artists.

The first 30 minutes or so of the show revealed the dangers of such a play, filled with theories of human behaviour and discussions of social problems, it tended to be a bit too wordy for actors focussed on an essentially corporeal form of theatre. Too much talk, and much soft music in the background (thanks to Vanessa Lachance).  Music is an important part of the show but it did not assert itself as much as it might have at that point. But all this soon changed.

The evening evolved!  The function of each character became clear. The dialogue was more pointed. We began following events much more clearly and the masks helped us locate these crooks in their rightful place. Arlequin, and el Capitan, two traditional commedia types were transformed into new types that depended on hyped up physical movement that changed their original meanings.  Arlequin’s overflowing blazing talents is a poet who clings to women’s legs and begs for their love. He is a blond clown with a glowing wig, a multi-coloured Zani – or Valet – who no longer corresponds to his traditional self.  The Captain wears a scary mask with empty eyes like a zombie and an energetic bounce that suggest his origins on the Italian stage but he is angry and anxious to get to on with making money. Dona Sirena (Soo Garay) a beautiful slightly aging dame of no wealth, is ready to trick Señor and Señora Polichinela into bringing their daughter to a kitschy party,  organized to find her  a rich husband so that Sirena can get a cut of the money. The feisty little Colombina is ready to help the lovers for her part while the others are all caught up in the game; no one seems to realize they are being used, although intelligent and beautiful Silvia smells monkey business and is immediately attracted to Leandro, the one who seems to be the most  victimized

The masks take on a very strong sense of their commedia origins while also pinpointing the  falseness  of the wearers. Neither Silvia  nor Leandro  wear masks , which means they are not trying to hide anything  but take a look at Crispin’s mask with the raised eyebrows, the ironic grin painted into the surface, all expressions to  inspire mistrust,  Silvia (Eldershaw) for her part,  is pure truth and love and intelligence although Leandro (Anurag Choudry) who has no mask,  seems to have developed a personal walking style using his legs as long supports that help him take huge strides. A rather “montepythonesque” style of getting around that was rather original, especially if you think that the function of the mask was to remove the performance from the face and reposition it in the body.

The exterior of Silvia’s parents reflects perfectly their inner falsehoods and the actors assume these with great assuredness. Mme Polichinela (Neta J. Rose) in her sequined, flashy, tightly molded dress and expensive-looking sparkles and fluffy purple wig, lights up the stage as she slinks up to her husband the huge thug Polichinela with his enormous stomach ( a sign of high living) , his long bumpy nose, his growling voice and distasteful countenance , the perfect symbol of the degenerate wealthy person whose body is going to wrack and ruin while the subservient hotel manager (Stavros Sakiadis) grovels and trembles as Arlequin and El Capitan along with Crispin who insists that he accepts all these  people who will eventually bring him great fortune, even if they cannot pay their bills immediately .

There is a magnificent twist at the end which is worth the whole evening and it features along with senor Polichinela (Scott Maudsley), William Beddoes as the Prosecutor who does a number that brings down the house with his confused babbling, his long black  stringy hair, and his attempt to bring order and rigour to the proceedings. I have never seen Beddoes succeed such a transformation on stage before. He belongs with this   company.!!!

All this roaring activity takes place against a magic background when, after sunset, the urban forms of Barry Padolsky’s scenography emerge glowing in the dark, appearing to grow out of the greenery of Strathcona park, like magic creatures called up by the night. Graham Price’s lighting design enhanced this set and left us with a performance that faced challenges, but that ended beautifully .

Good luck to Laurie Steven and her new band of merry artists in the park.