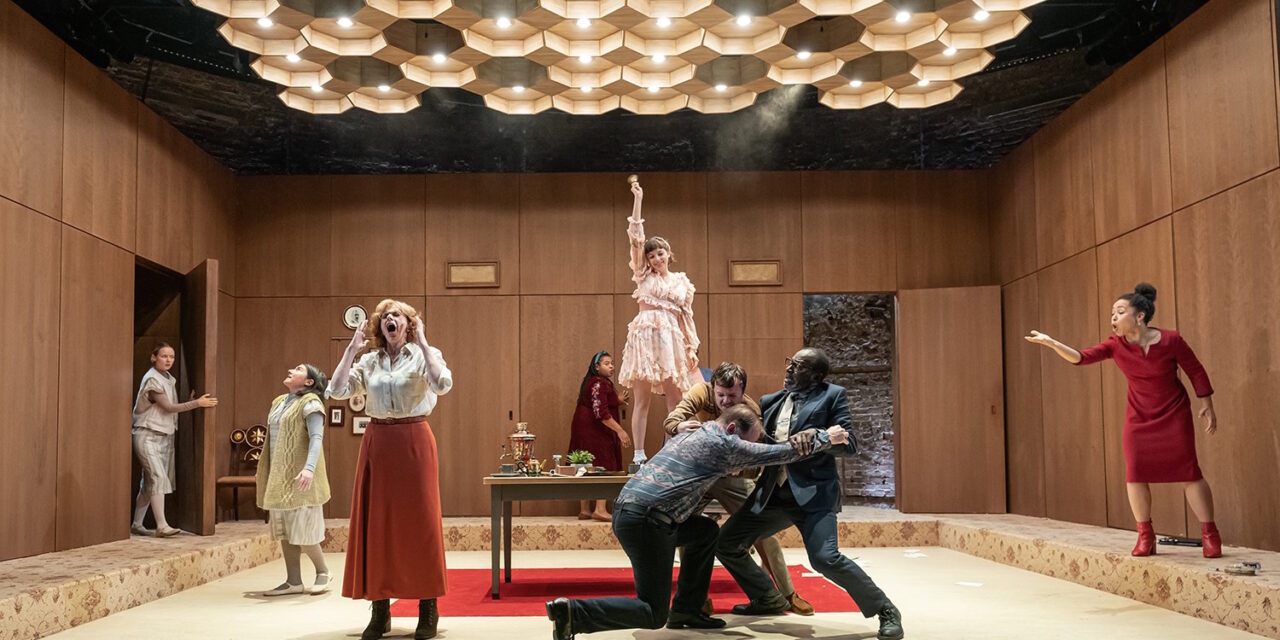 The cast of "Vassa" at the Almeida Theatre. Photo: Marc Brenner

“Our family doesn’t get on,” sneers the eponymous matriarch of Maxim Gorky’s Vassa, now playing at the Almeida Theatre in an adaptation by Mike Bartlett. Uttered towards the end of the play, Vassa’s declaration is a belated understatement of how the members of her dysfunctional family spend most of their time bickering with one other, plotting feeble stratagems, and eavesdropping behind closed doors.

With her husband on his deathbed, Vassa is not only responsible for arranging matters of the inheritance among her three adult children, but intent on brushing up their extended family under the guise of “guarding the house.” Before long, moral qualms go out the window, and manipulative expediency takes over. “Children make laws,” Vassa explains matter-of-factly, “grown-ups make deals.” But in her deals, she appears to be the only winner.

Directed by Tinuke Craig with baffling looseness, Bartlett’s free-floating adaptation of Gorky’s Vassa Zheleznova (originally published in 1910 but first performed in 1936) begins with projected statements that situate the work in its pre-revolutionary setting. But just as Bartlett’s title drops the matriarch’s last name, his adaptation gets rid of nearly every detail that would anchor this play in a specific historical context. Both Fly Davis’s wooden-paneled set and Lisa Aitken’s quasi-contemporary costumes distance Vassa from any attempt at capturing the atmosphere of an early twentieth-century narrative. Anything goes in this production, and this indiscriminate aesthetic extends well into Craig’s considerably undercooked direction, as well as the cast’s haphazardly modulated performances.

Caught in a destructive orbit around the domineering figure of Vassa, many of the play’s colorfully edgy characters are part of one big family. But there is very little in Craig’s production to make you believe so. The problems have to do both with the chemistry among her actors and with the pronounced differences in their registers of performance. Neither the siblings nor the married couples reveal anything of the knotty dynamics that such relations would carry, no matter how estranged or disagreeable the parties may be.

This is not necessarily to criticize individual performers in their own right: rather, the production boasts some strong performances, particularly by Arthur Hughes (the disparaged son Pavel), Amber James (the steely daughter Anna), and Danny Kirane (the acerbically easygoing Semyon, Pavel’s older brother). Siobhán Redmond’s Vassa alternates decently between shades of ruthlessness and sincerity, and Kayla Meikle delivers some memorably belligerent moments as her outspoken daughter-in-law. This is all fine, except that each of these performances belongs to a separate production; their wavelengths do not mesh symphonically. When the actors come together on stage, what we see is much more a medley of quirky strangers than a problematic family.

Add to this a number of inexplicably stylized moments in an otherwise realistic staging, along with some awkward changes in lighting, and you have a production whose coherent aspects turn out to be its outliers. Complicit in creating this off-kilter effect is a sleekly claustrophobic design that would be far more fitting for a corporate drama (think HBO’s Succession). Presented with this formal-looking and largely bare interior, where family pictures are crammed into a corner, one should not be blamed for forgetting that the play takes place in a family home, rather than a high-up office.

There are some engaging moments, especially near the end, where the rhythm of filial confrontations picks up real steam, making one feel the sharp, corrosive edges of this family’s internal hostilities. Elsewhere, the vacuous volatilities of this middling production are plentiful, but when such meaty encounters flare, they pull you back into Gorky’s complex vision of a family—and a nation—headed to ruin.