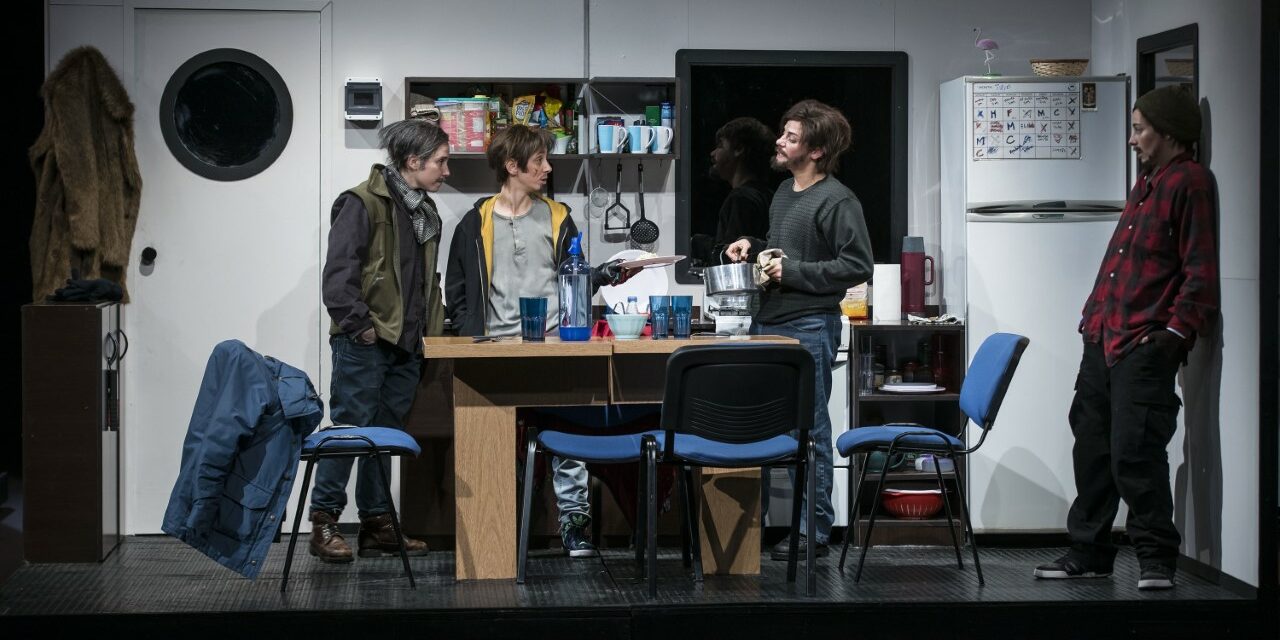 For many in the English-speaking world, the company Piel de Lava is known primarily for its work in Mariano Llinás’s 13+ hour epic, La flor (English title The Flower, 2016-18), a gloriously inventive run through cinema history, genre and performance registers with the four actresses who make up the company playing a range of roles from archaeologists to Cold War spies and 19th-century explorers. But Piel de Lava is much more than La flor, as the company’s five theatre productions to date show.  The actresses who make up Piel de Lava—Elisa Carricajo, Valeria Correa, Pilar Gamboa and Laura Paredes—met in 2003, while studying with Rafael Spregelburd and Alejandro Catalán, and have been making theatre, with writer-director Laura Fernández, since then. Their five productions to date, Colores verdaderos (English title True Colours, 2003), Neblina (Mist, 2009), Tren (Train, 2009), Museo (Museum, 2014) and now Petróleo (Petroleum), have made Piel de Lava an important reference point in the contemporary Argentine theatre scene.

Petroleum is arguably the company’s most adventurous theatre production to date in both form and theme and returns to Buenos Aires at the Metropolitan Sura theatre following sell-out runs at the Sarmiento theatre—where the piece opened in August 2018—and the Sala Casacuberta. This is a show that audiences have flocked to see. It certainly struck a chord with the predominantly female audience who saw it on a warm summer night towards the end of its current run. The rapturous response involved a standing ovation from many in the audience. Playing four male oil workers adrift on a remote rig, the company tackles the misogyny and machismo that underpins Argentine society head-on—with wit, humanity and a refusal to tolerate easy binaries.

In a remote corner of Patagonia, the routine of three oil workers, El Carli (Pilar Gamboa), Montoya (Laura Paredes), and Formosa (Valeria Correa) is disrupted by the arrival of a new member of the team, Palladino (Elisa Carricajo). From the very beginning, Palladino is presented at the margins, sat on the floor in the cramped bedroom where the four men sleep. Their silence contrasts with the overbearing personality of Carli who swaggers and boasts, with hands in jean pockets or crossed arms. Palladino holds their ground (both physically and metaphorically), adhering to a limited view of the world where men are hunter-gatherers and women there to do their bidding. Gamboa imbues Carli with a dangerous sense of entitlement—the rolling of the tongue around the mouth, the scrunched face, the firm posture that is about occupying and maintaining control of the room. Valeria Correa’s wily Formosa presents a contrasting presence: as a mass of nervous energy, a live wire who emulates Carli only to find this value system under question when Palladino arrives.  Montoya—a man who has been grey for as long as he can remember—tries to tow the Carli line, only this line becomes less attractive when Palladino brings a new stillness and a new capacity for listening into the group. And so, the revelations tumble—the fear of the dark, the ominous sounds of the wells, the lack of understanding of what fatherhood entails. At times, when discussing phone conversations with their mothers, it is as if they are small boys, trapped in a state of childhood that they have not been able to leave behind them.

The extreme cold of the Patagonian landscape is evoked through the whistling wind of Xypce’s soundscape and jokes that, if they pee outdoors, the stream of urine would freeze.  There is a bonding that happens through the sharing of a small portacabin and the outside toilet that serves as the men’s living quarters: whether it is meals cooked by Carli that Formosa and Montoya drool over or banter over their girlfriends—or the lack of them in Montoya’s case that arouses Carli’s suspicion. The feminine energy that Palladino brings into the space shifts the dynamic. Palladino’s stillness encourages a new contemplation in the three other men that contrasts with the positions of authority that they occupy in the opening tableau, with a woman’s voiceover in documentary fashion delineating the harsh conditions on the remote oil wells. In effect, Palladino allows for the beginning of a deconstruction of the masculine persona that the three men operate through. Palladino’s attire—sporting their wife’s fur coat and yellow mohair jumper with a golden tiger emblazoned on the front—arouses a distrust in Carli that soon turns to fascination. Correa’s Formosa is the first to fall captive to Palladino’s bag of mysterious clothes—sporting a pink sequinned dress that literally liberates them. Formosa moves with a novel lightness, dancing across the men’s living quarters with a new-found purpose. Montoya’s misgivings soon give way to a curiosity that has them admit that there is no girlfriend and never was—the beginnings of accepting a gay identity that has remained covered under the layers of clothing that they sport as protection from the cold and a particular limiting understanding of what masculinity entails. Even Carli cannot resist the gold high heeled shoes that Formosa holds up in wonder like a trophy from the bag and, following an initial wobble, stands tall in them beside Palladino.

Palladino’s zen-like figure soon comes to dominate the space, effectively displacing and curtailing Carli’s aggressive energy. Their sprawled position in the piece’s final scene—relaxed in black tights and trainers—offers a new model for the men: something less aggressive and boastful. This is a play where masculinity is a construction—the actresses make poses that embody that which has been seen to embody the masculine in the very opening, but these poses are pulled apart as the piece evolves. At the play’s end, Carli removes their penis and places it on the kitchen table where Palladino plays with it using a fluffy flamingo pen: two objects signaling the masculine and the feminine brought into a ludic encounter.

The choice of a remote, inhospitable location in Patagonia where the men are involved in the hard labor of draining the land of its resources is telling. The oil well may indeed be bled dry—the men trying to sure final drops of something that is no longer there—and this may function as a metaphor for entrenched ideas about masculinity and femininity that have no place in a fluid gender world. Furthermore, this is a stage space where fluidity dominates, as evidenced in Rodrigo González Garillo’s portacabin-cum-trailer and toilet that are imaginatively moved across the stage to create the poky bedroom, living room and toilet where the men cohabitate. Its exterior blandness is animated by the performers’ bodies, whether climbing up the confined bunkbeds with the rolled-up mattresses and clothes littering the space or gathered around the small, anonymous kitchen table as they eat together. What the production does so well, in Laura Fernández’s expertly paced staging, is present a world that is gradually deconstructed as the absolutes of a value system are called into question by the freedom that Palladino brings into the constricted space.

The performances are nothing short of extraordinary. Gamboa’s gruff, boastful Carli is compelling with their rough, gravelish voice and harsh nasal undertones. Carricajo offers a perfect counterpoint as the gum-chewing Palladino, the cowboy that rolls into town with a different set of priorities and shifts the world order. With their red-checked shirt, languid tones and relaxed demeanor, Carricajo presents a veritable contrast to Correa’s deep throat Formosa with their wispy goatee beard, angular face and an oversized baseball cap. While Formosa echoes Carli’s words and emulates their blustering moves, Montoya’s restlessness and stuttering display the tensions that mark their attempts to follow Carli. The bickering and arguing of close living never feel forced, the nicknames and banter—they all have nicknames from El Formo to El Palla—feel lived in, and the competitiveness—realized most powerfully in an arm-wrestling match between Carli and Palladino which further accentuates the power shift within the group—gives the piece a real edge. At the end of Petroleum, as a new tableau is formed, the characters no longer looked trapped within a masculine ethos where their bodies were clenched in a desperate performative gesture. They watch the audience, their positions more relaxed, their gaze more direct and in that gaze, they invite us to look back in a spirited gesture that recognizes our own complicity in the classification of bodies, gestures, and minds within binaries that reduce the complexity of a world that so often relegates women to a secondary position in terms of roles, agency and activity. 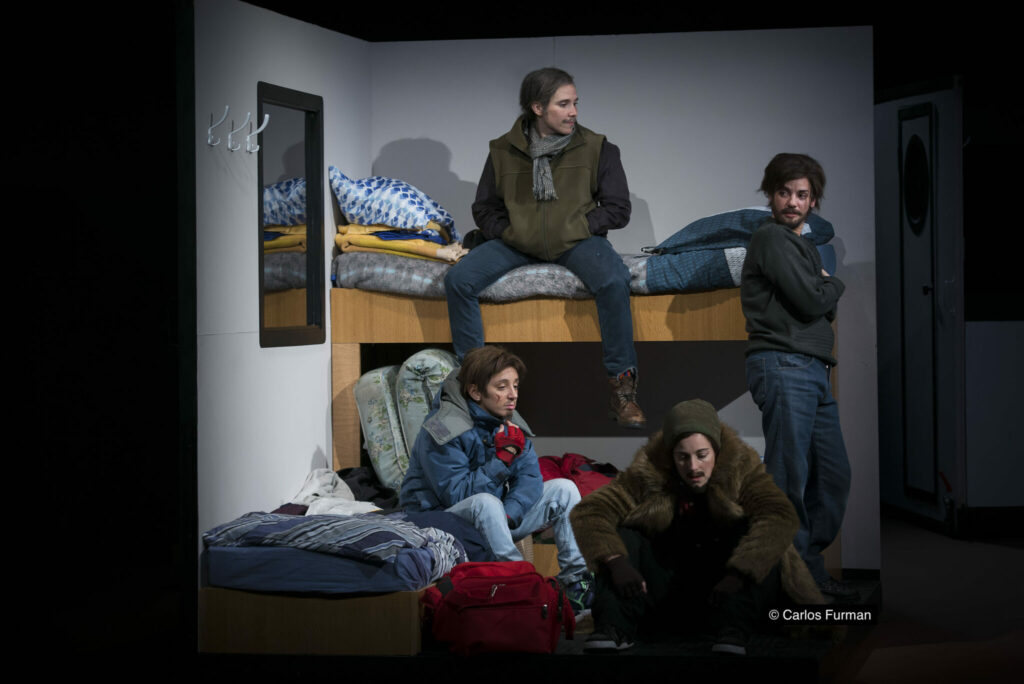 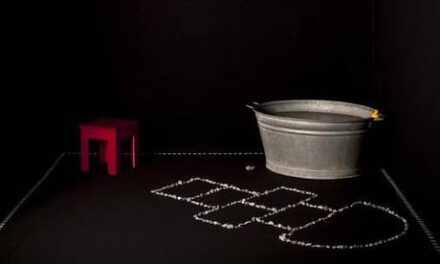