A Russian in Hong Kong – Kristina Pakhomova and “Lady Death” 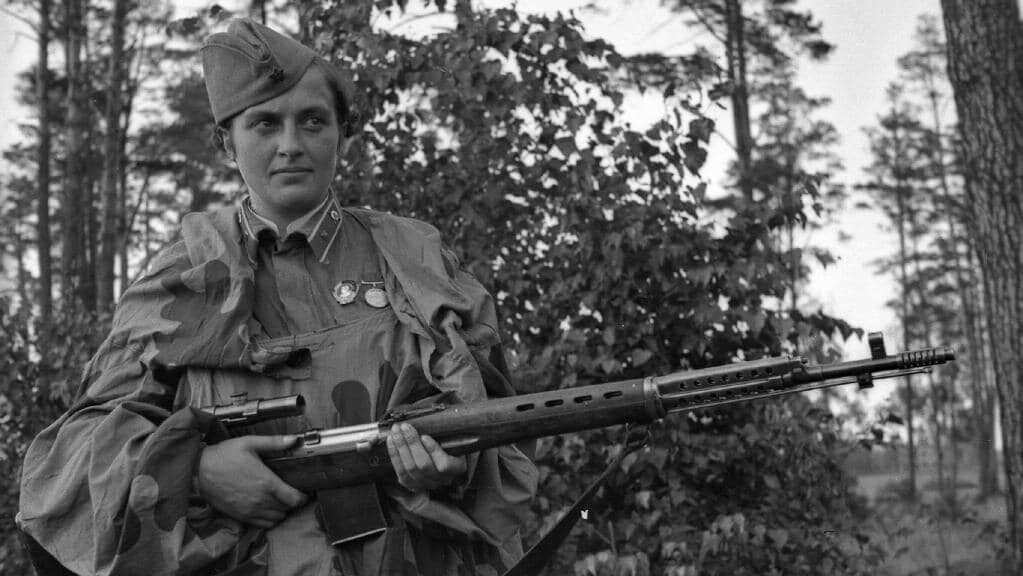 For most people in Hong Kong, the name Lyudmila Pavlichenko certainly does not ring a bell. She is not a fictional character but a historical figure who was one of the very first female snipers in the Red Army during World War II with a record of killing 309 fascists.

Russian theatre practitioner Kristina Pakhomova was inspired by Pavlichenko’s story and has used two years to finalize the play Lady Death. It is now going to have its premiere at the McAulay Studio, Hong Kong Arts Centre, produced by Pakhomova’s own company KrisP. Production, directed by Khairul Kamsani.

“I have always been interested in strong female characters,” Pakhomova states in the interview printed on the production’s press release. “Lyudmila Pavlichenko, a Soviet female sniper is the definition of a strong female character. The first time I heard her story was in the Russian movie, Battle for Sevastopol. Coincidentally, shortly after seeing it, my friend in Singapore wrote to tell me he had just come across this bad-ass Russian female sniper story that reminded him of me. He encouraged me to write a play about her.”

Pavlichenko was after all a Soviet sniper who most of the population in the world might consider her as a bloody killer who fought against Fascism back in the day, yet also still served another Totalitarian state until she died. Pakhomova, however, thinks that she is more than just a brain-washed Soviet soldier. 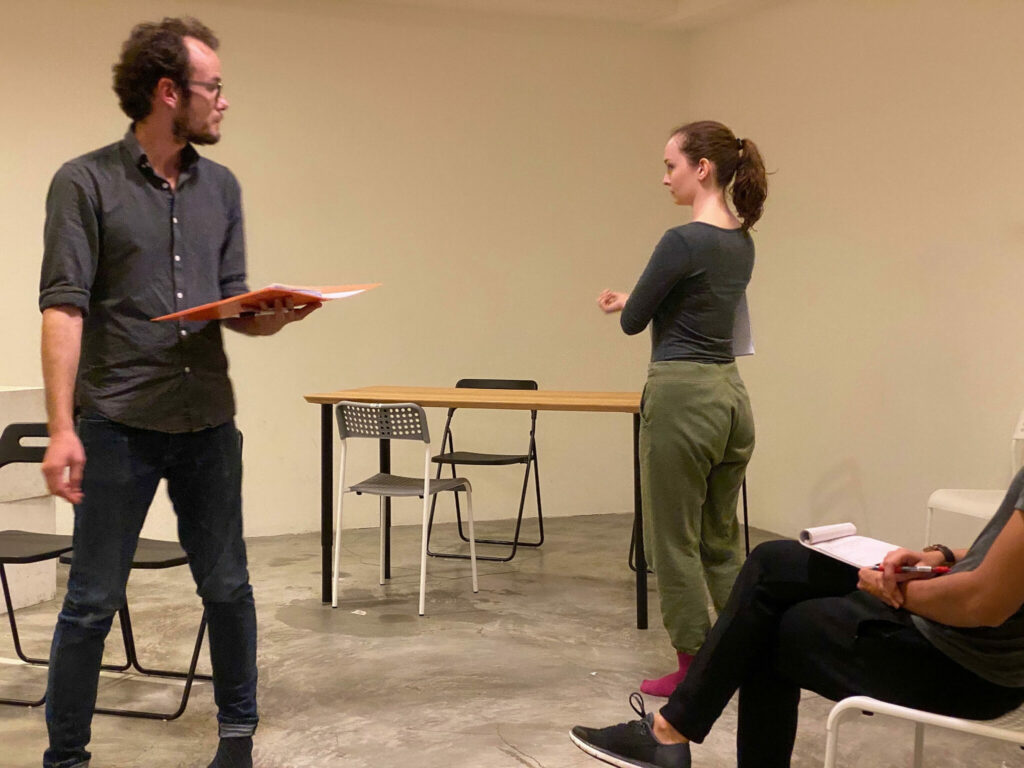 “What struck me in Lyudmila’s story is that, although she is technically a killer, a [female] sniper, a soldier; she is also a loving mother, a friend, a daughter. She is feminine and caring and funny, as well as being ruthless and political. She is so many things, you see? For me, she was and still is an inspiration.”

Same as Pavlichenko, Pakhomova exudes these types of characteristics. Born and raised in Russia, Pakhomova has never left her country until university, and it was not pre-planned.

“My parents and I used to travel a lot around Asia, and we visited Singapore multiple times. When I was 17 years old, after high school, I chose to study in Russia. It was great. I didn’t have any plans on living abroad at that time. I was in my second year of school, having an acting course in Vladivostok, which is a city in the far east of Russia when my parents called me while they were on holiday in Singapore at that time. They told me that they had found this amazing new university of the arts in Singapore called Lasalle, and they were wondering if I’ll be interested to apply. So I decided to give it a try and the rest is history.”

However, a big challenge to Pakhomova awaited: she could hardly speak English in a conversational manner, and she had to pass an English exam after a 3-month course in order for the university to accept her.

“I failed that English exam three times. I was already planning to go back to Russia when I decided to go for an audition at the university anyway. I read Ophelia’s monologue from Hamlet and another monologue from Who’s Afraid of Virginia Wolf? with my thick Russian accent. The next day, I got a phone call from the university saying that I got accepted. “But I failed my English exam,” I told them. They replied to me that it was not an issue and I could still complete another exam. I did that, but I have never seen the results of that exam, which makes me believe that I failed it for the 4th time again. I guess they didn’t care though.” 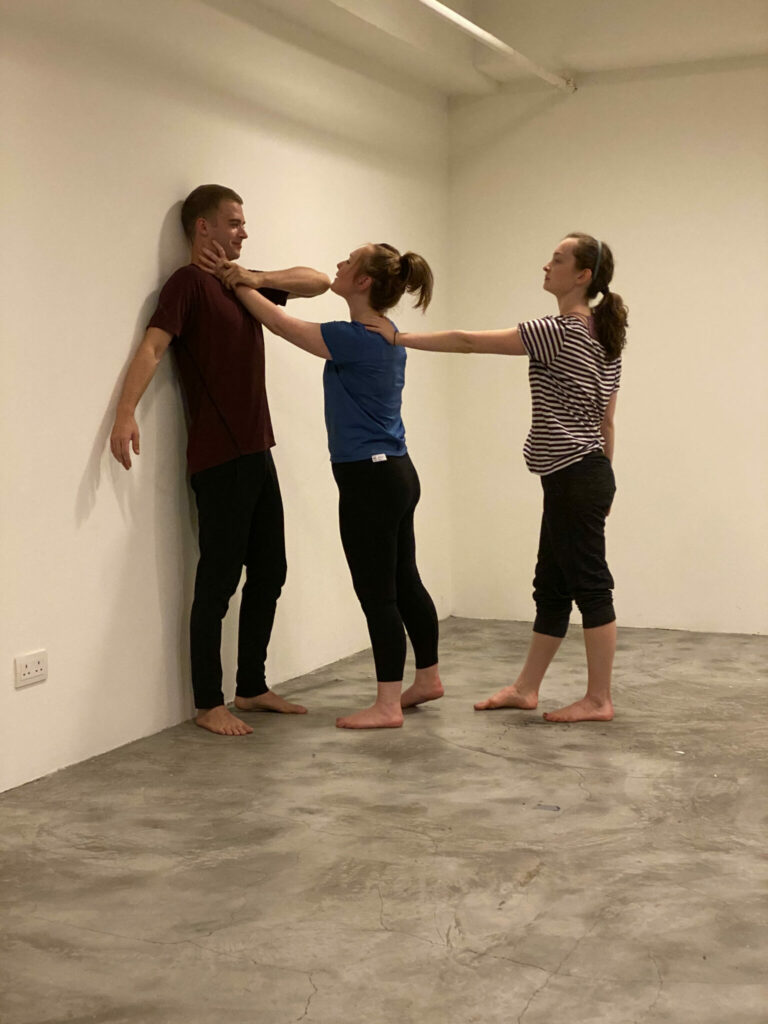 In 2015, Pakhomova and Kamsani worked together intensively for the play Discord of Discourse, written and directed by Kamsani. Pakhomova was acting in it. However, to Kamsani, his appreciation of Pakhomova goes back to their university years.

“Back in school, I could observe how Kristina encountered her environment with a very different lens but still put in a lot of effort to see the other perspectives to the same context. Being uniquely Russian in a Singaporean college with a majority of local students, Kristina learned a lot about Singaporean culture during her time there while still holding on to her “Russian-ness” and I believe that she carries that ability everywhere she goes, especially during her time here in Hong Kong. I would say that her experiences have given her the ability to be empathetic from her practice as an excellent actor, and pragmatic as a producer, which I have rarely come across.”

Kamsani is a very physical director. He uses the Viewpoints, a training system started by theatre practitioners Anne Bogart and Tina Landau, as the base of his acting training as well as his rehearsal process. It is highly physical and demanding on actors’ sensories since they need to be constantly aware of the duration of their bodies, how fast and slow they can move, yet also be alert to any external changes within the environment the actors are in. Kamsani’s actors are pretty much exhausted under his hands even just for only the first 20 minutes of a four-hour rehearsal, not to mention that it is only the warm-up.

And about Pakhomova’s play, Kamsani has a clear vision of what the story of the Soviet sniper should be about, something that is more about the playwright herself instead of the leading character.

“It’s rare to be able to read a script that can make you think, “This needs to be put up now because of what’s going on!” It also has to do a lot with who are the artists involved in the project because the medium is always part of the message. I am very keen to work with Kristina on Lady Death as it is a glimpse into her understanding of the wider world through someone else’s story, as it happens for most playwrights and their work, and with how the state of the world is unfolding, her play that parallels history and today offers us interesting discussions to have after the performance.” 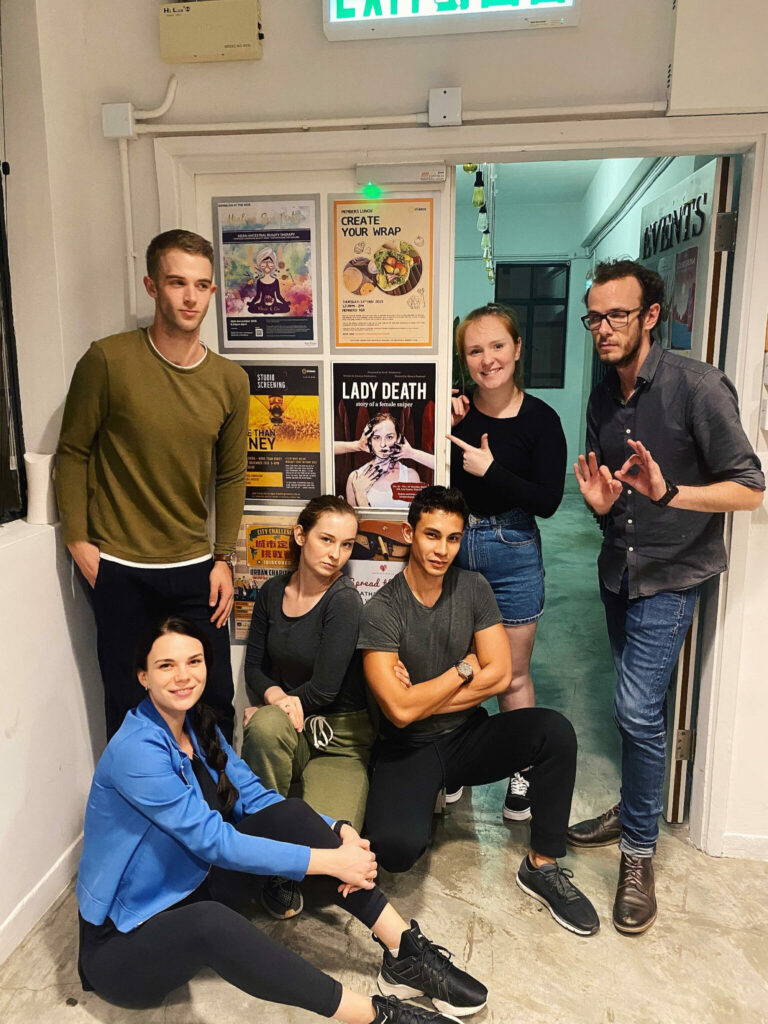 People in Hong Kong usually have a perception of how Russians think about their own Soviet history and politics, and because of the close link between Hong Kong and China, not to mention the heated unrest in the past five months between the two, Hong Kongers would probably think Pakhomova, as a Russian, is writing a propaganda on revolution, commenting on the situation in Hong Kong.

The playwright clears the possible assumption. “My aim is not to make a political statement or give my personal opinion on the current situation in Hong Kong. I don’t do political theatre because I don’t know so much about politics or understand it enough. And more than that I truly believe that it’s just impossible to know the whole truth of it at all. I’m more interested in people, their traumas, their ability to empathize, their family stories, their passions, flaws, fears, their relationships and We don’t give an opinion about who is right and who is wrong. The whole point of the play is to say that the world is not black and white. It’s much more complex than that, and I think everyone in the audience will agree to that.”

Kamsani joins in, “Lady Death is set in Soviet Russia during World War II with the young legendary sniper Lyudmila Pavlichenko as the protagonist, but this was only our starting point into the exploration of conflict, power, authority, misinformation, deceit, and loss that are universal across the ages, and parts of the world. Certainly, audiences who are living in Hong Kong during our performance run will be affected or associated with the unrest in some degree. The power of the play is to visit that liminal boundary of reality and play to gain a wider perspective on various contexts.”

“I do theatre because I love storytelling. Since I was a child, I’ve been fascinated by the power of a good story: how it can transport me to a different world, can change my perceptions about the world, and most of all, can break stereotypes. That’s why I do theatre. I like to provoke a healthy discussion about difficult topics and make my audience not only be entertained but also challenged in a way I like to make them think about themselves, their families and their choices in life. I believe that through constant questioning, discovering and rediscovering we can learn about ourselves,” Pakhomova concludes. 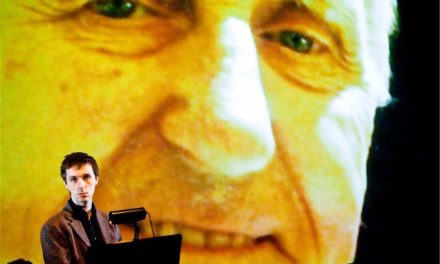 There is No Single Mainstream: Conversation With Wojtek Ziemilski About Devised Theatre 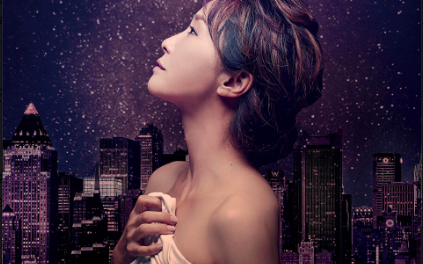