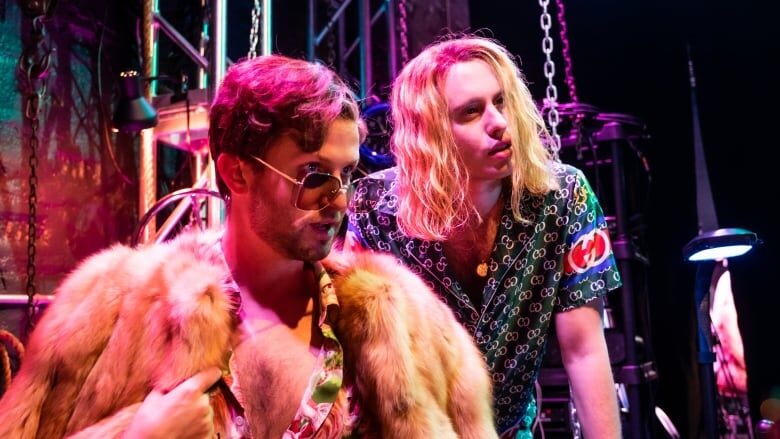 Actors and Authors Michael Breslin and Patrick Foley in "Circle Jerk." Directed by Rory Pelsue, in collaboration with Cat Rodrígues and Ariel Sibert, for Fake Friends in Brooklyn, NY. 2020

Lights up. Enter a troll. Literally.

Circle Jerk, returning to stream on demand January 1 – 17, 2021, is the latest offering from Michael Breslin and Patrick Foley’s exciting Brooklyn-based company Fake Friends. In a piece where “the ends justify the memes,” what could be a more appropriate opening than a greeting from a personified Internet troll speaking in verse and feeling like part bouffon clown and part Wicked Witch of the West? I was on board with this impressive and evocative online production pretty much immediately. Written by Breslin and Foley and directed by Rory Pelsue in collaboration with Cat Rodrígues and Ariel Sibert, Circle Jerk features Breslin, Foley, and Rodrígues literally flipping wigs as they breathe impish life into nine inhabitants and off-season visitors to a house on Gayman Island. After enduring the worst punishment the Internet has to offer, being cancelled, two White Gay internet trolls create and unleash Ava Maria, a meme creating artificial intelligence. Her mission? Brainwash the minds of the doom scrolling world with custom created conspiracy fueled “gay supremacist” memes. It’s the stuff of campy science fiction in which Ava Maria’s creators exclaim “she’s online!” at the pivotal moment when one might have been expecting “it’s alive!” But, just as the cheesy monster flicks of the Atomic Age reflected national and global nuclear fears, Circle Jerk effectively taps into some very real contemporary cultural anxieties.

Having done my homework, I had not planned to ask Breslin, Foley, and Pelsue the basic “tell me about your company” questions in a recent conversation. When my very first line of discussion, however, presupposed that Circle Jerk aims to critique 2020 through a queer lens, Breslin acknowledged the queer perspective, but also pushed back. “We’re always surprised,” he said, “by what people identify as queer about it, because some of it just feels so intrinsic to how we see the world.” The framework for Circle Jerk was completed in November 2019. Breslin says that he and his collaborators felt subsequently like they were seeing certain elements of their “heightened, ridiculous world of constantly shifting identity and costume, façade and surface” unfolding in the news.

Circle Jerk does feel like it straddles the “real” world and the Ridiculous tradition that mocks it at a time when the two feel like colliding planets whose impact may result in a troubling, if unspecified, cataclysm. The piece sets a course right for the heart of that maelstrom with defiant panache, all the while wrestling with the dramaturgical implications of this convergence. The show’s creators considered their strategy carefully when deciding on how to package it to find an audience. How, after all, should one market a piece that is simultaneously the scion of Charles Busch’s Vampire Lesbians of Sodom…and also feels eerily realistic at some points?

My conversation with Breslin, Foley, and Pelsue took place a little more than a week after the presidential election in the United States. “I keep coming back to Kellyanne Conway,” Breslin says. “I think the Ridiculous Theater has reached the highest level of office in the United States.” However, the political Left is not protected from the crosshairs of Circle Jerk’s sharp-witted “LGBTQ-Anon” narrative. Breslin says that there was discussion during the development process of Jean-Pierre Faye’s political “Horseshoe Theory,” contending that the fringe Right and Left sit not on distant ends of a political continuum, but bend toward each other and share some of the same disturbing elements. The piece never falls, however, into the “both sides” bias-towards-fairness trap that covering the Trump Presidency has blatantly exposed as the Achilles’ heel of some of the American mainstream media. Rather, it places the oppositely charged political magnets close enough together to cause some vibrations that are simultaneously hysterical and deeply disturbing. “It was pretty necessary,” Foley says, “to implicate and humiliate our own proximity to some of these hypocrisies.”

Charles Ludlam, one of the acknowledged progenitors of Fake Friends’ work, writes in his Ridiculous Theater Manifesto, “You are a living mockery of your own ideals. If not, you have set your ideals too low.” Or, as one of Breslin’s characters says midway through the Circle Jerk, “If you want to be disruptive to normative thought patters, you can at least be funny.” And the piece lives this credo, never treating the very real sociopolitical issues it examines (or itself) too reverently. While some political satire presents content and commentary on two neatly separated parallel tracks, that is not the case on Gayman Island. The content is the commentary, the moments gloriously messy. One of Foley’s characters—also named Patrick—in a moment of pique repeatedly shoots another character (whom he also plays) while the finale of Wicked rings out and digital blood spatters the camera lens. “Our goal is to get [the audience] laughing before we implicate them,” he says.

The production is enjoying a robust social media life, generating enthusiastic responses from a wider circle of energetic devotees than was expected by its creators, including some high-profile individuals. That, in tandem with its thematic take and literal plot, makes the production feel quite at home in the online space—particularly in the third act, a TikTok inspired fever dream. Consequently, the production exhibits the potential to become a version of the metastasized social media monster it presents and critiques. And that is truly where Circle Jerk grabs its audience by the… throat.

Breslin and Foley’s first collaboration, This American Wife, was a deconstruction of The Real Housewives franchise and an examination of the impacts of confessional reality TV culture. Though it utilized broadcast media as a vehicle for critique in performance, it was presented in a physical theatrical space in front of an in-person audience. Given how well it works as an online production, it was somewhat surprising to hear that Circle Jerk began its life (in a residency at Ars Nova’s Maker’s Lab) with the intent of being similarly presented. The pivot to the multi-camera fully online platform is breaking new ground for Fake Friends in an exciting way. “It’s different than doing a play,” Pelsue says, “but it’s also different than TV or film. Doing something that is for this Internet frame is very particular… There’s something exciting about that learning curve.”

It was important to all involved that the piece has some live performances. In the age of on-demand streaming and at a time when venues for in-person events are mostly closed, the idea of appointment viewing has become a bit of a novelty. Though Breslin does not appreciate what he calls the “fetishization” of the audience’s anticipation that something could go wrong with a live broadcast, he says that “that sense of an event, that everyone’s coming to this live thing together, surprisingly to us, actually really helped online.” The viewership for Circle Jerk’s live performances greatly eclipsed that of its original on-demand extension. Breslin, Foley, and Pelsue agree that this is evidence that live performance is key to at least partly rediscovering the sense of communal connection fostered by in-person theatre while working in the online space.

Shortly after the pandemic shuttered most theatres in the United States, a colleague of mine ruefully said “we’re all YouTubers now.” At the time, I was unenthusiastic about the comparison. Breslin, Foley, and Pelsue, however, admire the inventiveness and creative drive of content creators employing sometimes meager resources to engage their subscribers while receiving little more than scorn from the critical establishment. There is something foundational to the work being done by Fake Friends, perhaps something Foley refers to with pride as a “kids in the basement quality,” that fits perfectly with and wholeheartedly embraces this YouTuber spirit.

Circle Jerk inhabits and inverts the derision of my colleague’s comment by managing, as Pelsue alludes, to not be just a YouTube video… or just television, or just a film, or just a recorded theatre event. Foley observes that a kind of “feral energy” was sometimes missing in “capital T Theatre” pre-pandemic. He asserts, and the others agree, that there is a benefit to “marrying the intellectual rigor or self-seriousness of some of the theatre world with this kind of bootstraps mentality of YouTube” and that doing so is central to Fake Friends’ work.

There is a hint of idealistic optimism in this perspective that is stitched into the sometimes-acerbic fabric of Circle Jerk with a delicate touch. Honestly, it might be the counterintuitive special ingredient that allows it to blaze an exhilarating trail in this medium and that makes it work so well on its own terms. 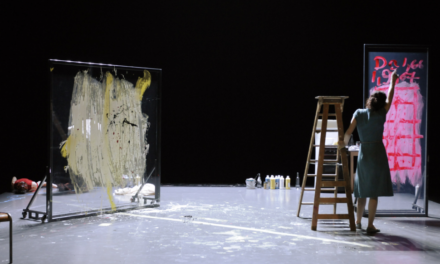 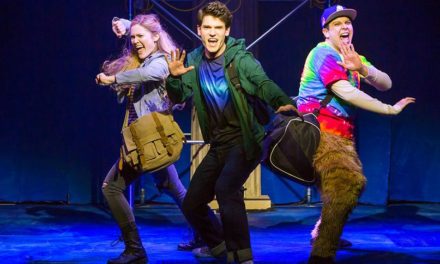 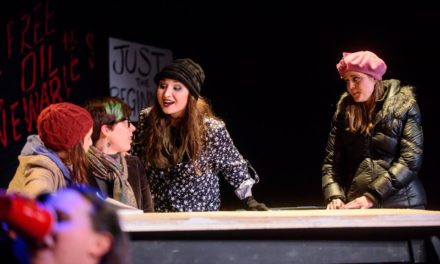