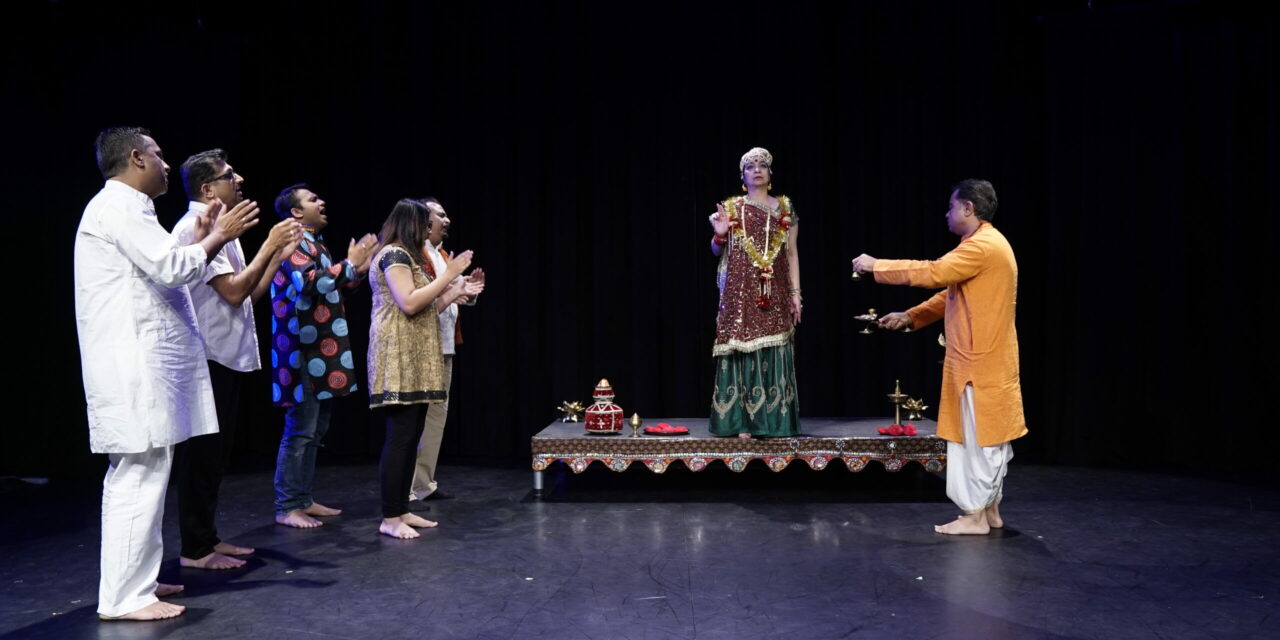 SAWITRI Theatre, based out of Mississauga, Ontario, recently paid a tribute to the acclaimed Indian playwright Chinu Modi. Being one of the flag-bearers of South Asian theatre in Canada, the award-winning SAWITRI Theatre has been professionally active for the past sixteen years and it focuses on theatre in four diverse South Asian languages like Hindi, Gujarati, Marathi, and English. Its latest production included the staging of three Gujarati one-act plays by Chinu Modi– Photographer, Hukam Malik (Yes master) and Haajra hajoor (The Goddess).

The plays were directed by Naimesh Nanavaty and Shruti Shah. 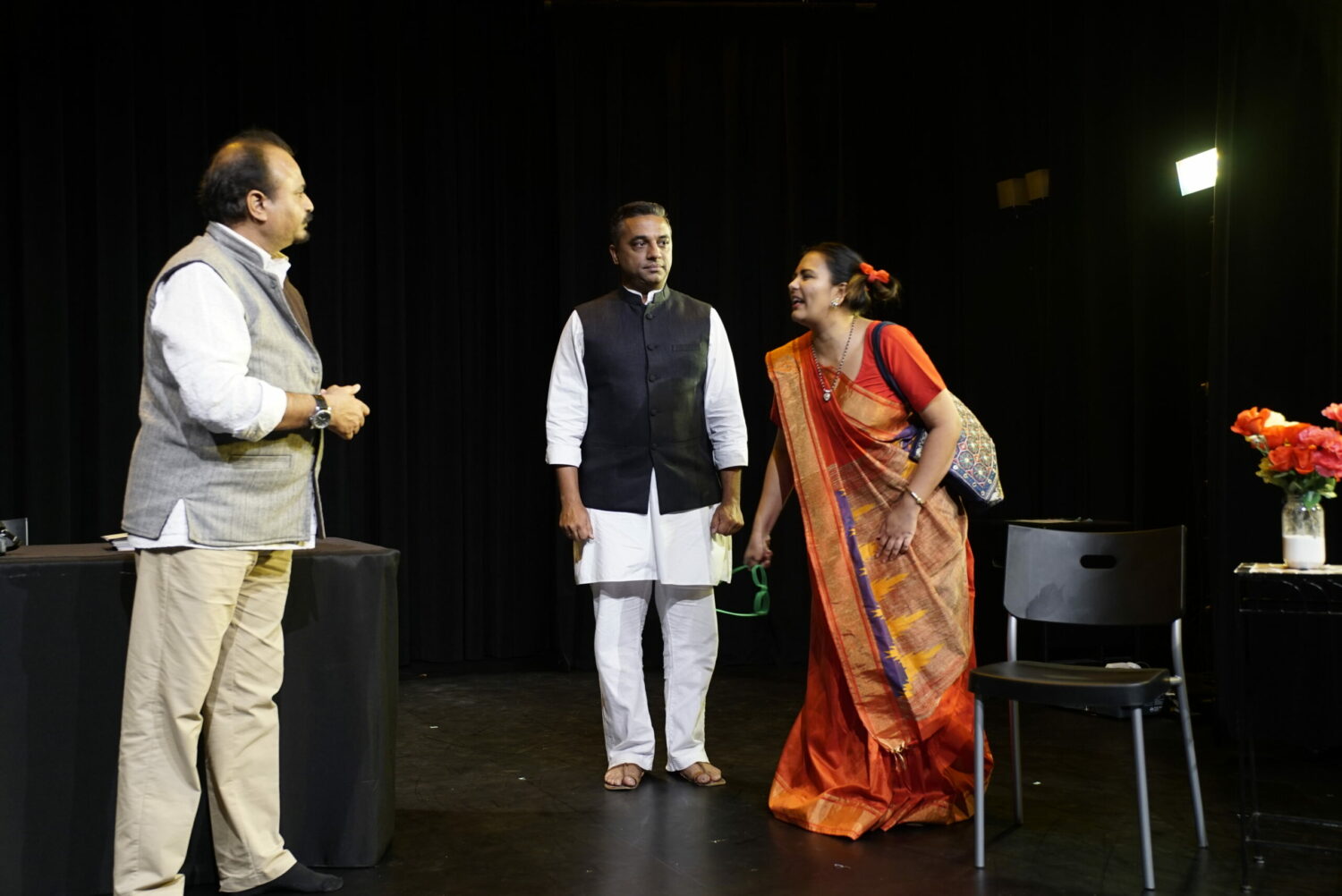 The story of disconnect between a couple told through the mediation of a photographer, this play was a perfect blend of humor and pathos. The photographer, also acting as a narrator, is increasingly curious about the life of Hasmukhrai and his wife Savita who are diametrically opposite to each other. We see their life in snippets when they come to the photographer’s studio to get themselves clicked. The play that begins with humor eventually ends on a tragic note when Savita loses her eyes and Hasmukhrai his hearing due to old age. The relationship that began with disconnect reaches its pinnacle when even their basic senses stop responding. The audience’s curiosity about the couple’s life is piqued through the photographer himself as he acts as a stand-in for the audience. Jimish Thakkar, in the role of Hasmukhrai, was truly brilliant, overshadowing his interlocutors as he captured the subtle, shifting emotions with finesse and ease.  The use of sets, lights, and music was minimal which made the play very actor-driven. There was hardly any innovation as far as direction is concerned. Whatever power one felt was mostly due to the highly emotive and well-written script as well as Thakkar’s acting. 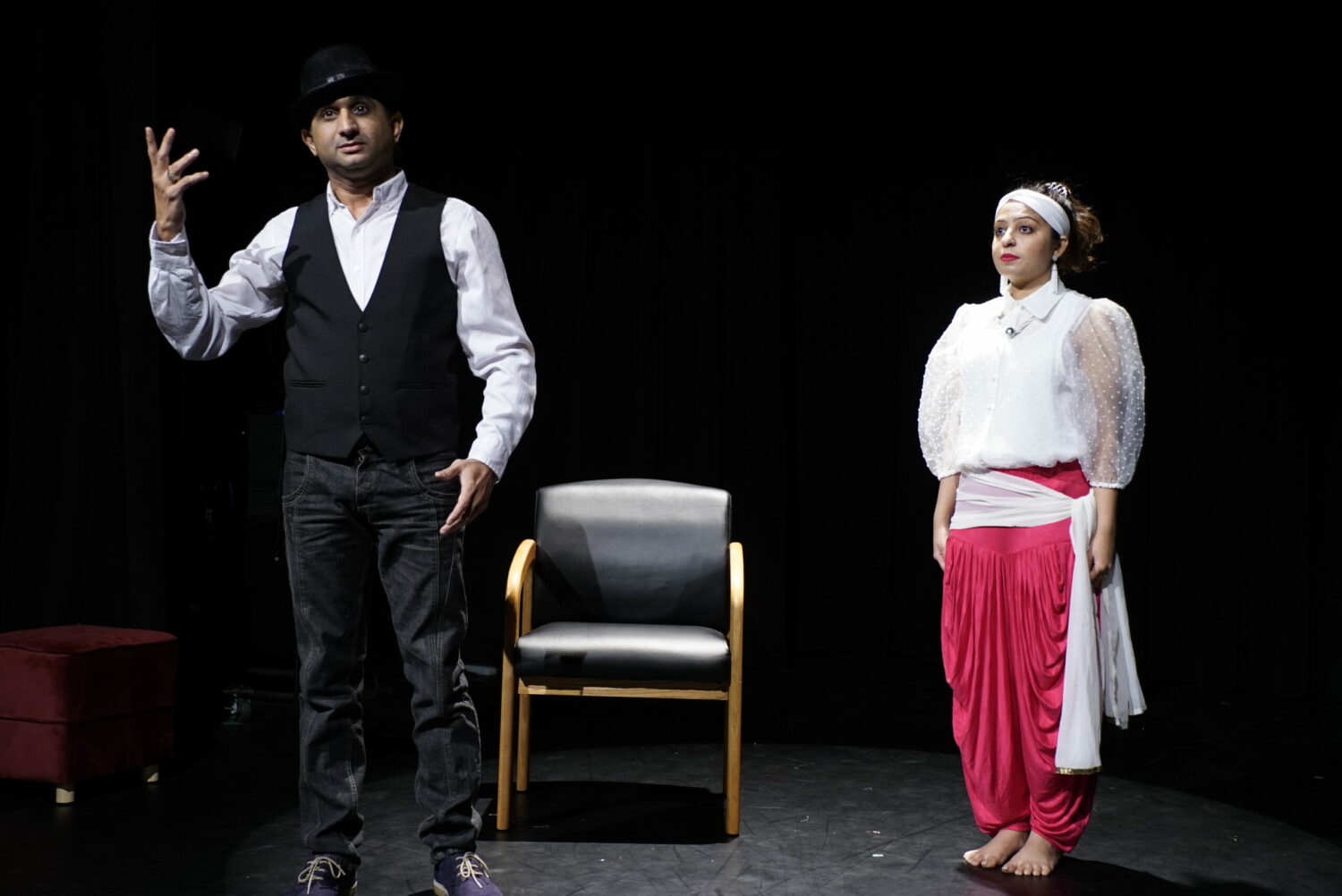 Hukam Malik is a two-hander that deals with the absurdity of life when one is always in power and one’s word is heard only when one gives an order. It features Adhikaar, the protagonist, and a Djinn, who has agreed to serve him on the conditions that he cannot leave the house. While initially enjoying the new-found power that allowed him all sorts of material gains, Adhikar eventually realizes the value of human contact, the burden of repetition and boredom and the worthlessness of materialistic pleasures. The play opens up new possibilities in the world that is increasingly more interested in the post-human phenomena. Jay Bhavsar and Dimpee Shah Jumani, playing Adhikar and Djinn respectively, carry their characters well. The slow deterioration of Adhikar is also very well reflected through the costumes, designed by Shruti Shah and Raina Desai, as we see him wearing expensive formals with a hat in the first scene and normal, pale clothes on his deathbed in the last scene. A contrived Bollywood-ish turn, that included a silly dance sequence and a Hindi film song, could have been easily avoided. 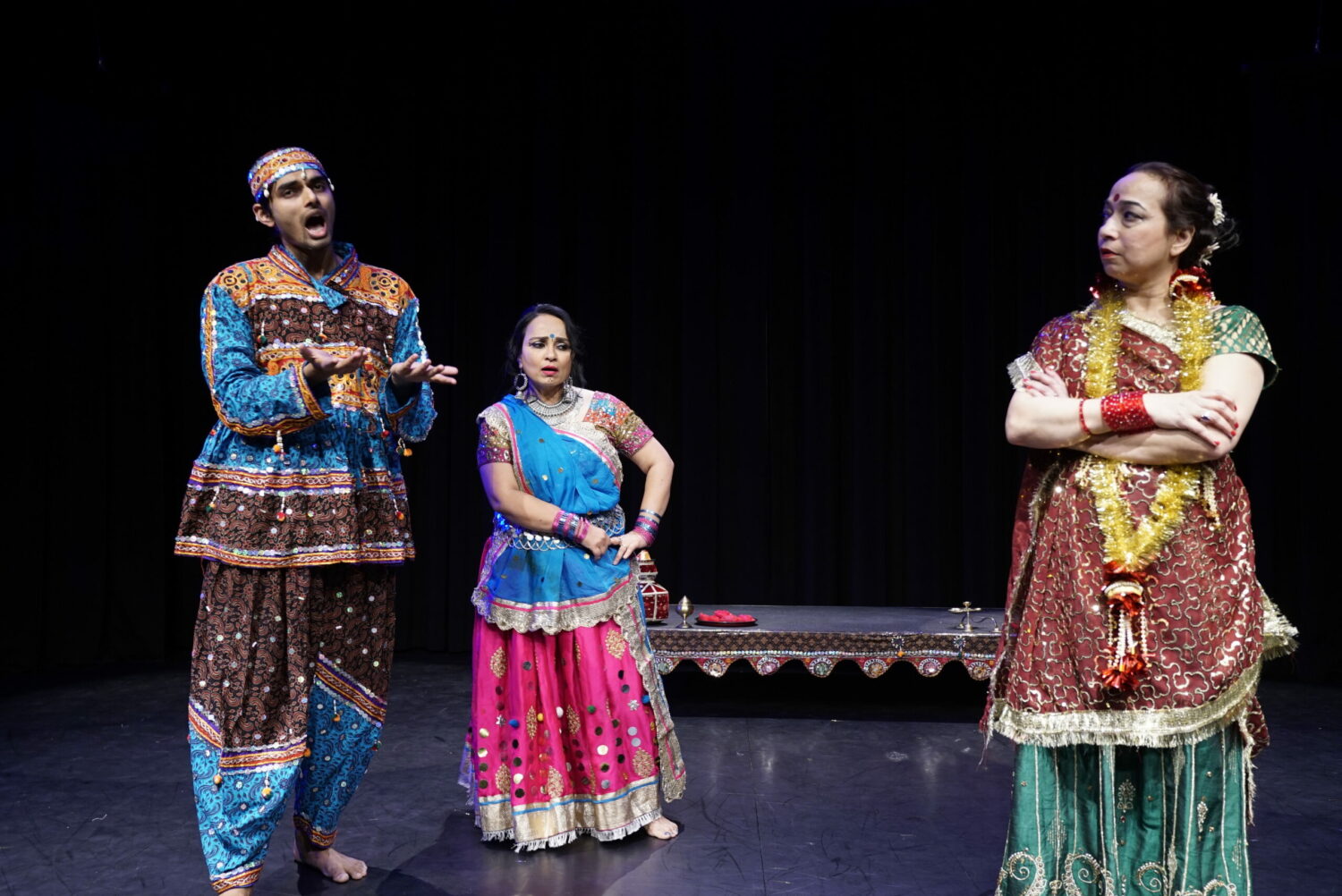 The lightest and the most satirical of the three, Haajra Hajoor tells the story of a goddess who transforms from an immobile, mute idol into a real goddess, walking and talking with humans. The play reveals the human follies of hypocrisy and selfishness and hints at how collective religion is deployed for purposes that are purely personal in nature. Initially charmed by the Goddess’s presence in the holy temple, the different characters—the temple worshipper, the disciples, the thieves, couples—start facing issues because of the fact that the goddess was all-knowing, and that she immediately called out on them every time they lied or did something wrong. Goddess’s constant presence became a huge hindrance to the daily lives of people around the temple, and for the order to be restored, it became necessary for her to turn back into a stone. Hilarious in parts, the play offered a stark contrast to the bleak nature of the previous two plays while also managing to make a hard-hitting point. Shruti Shah, in the role of a commanding and grumpy goddess, is a treat to watch. So is Sachin Trivedi, in the role of a witty and practical temple worshipper.  Space is used wisely. The characters make their entrance from different sides and also the front, giving a perfect sense of a holy temple that is open to everyone. The ensemble cast, consisting of eight characters and an additional chorus, comprised of trained and untrained actors which at times made the play very uneven.

As far as theatre is concerned, Canada’s favorite term “Multiculturalism” has often meant plays that cater to privileged, English speaking Canadian audiences who can gasp and sigh at the horrible living conditions in unfortunate parts of the world like the middle-east and South Asia. SAWITRI theatre’s attempt to showcase plays in a major South Asian language like Gujarati and to move away from traditional themes of diaspora, nostalgia, and poverty is a welcome and much-needed change. 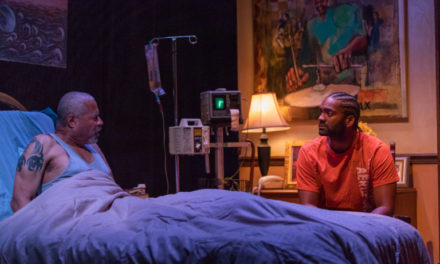 Speakeasy Succeeds With “Between Riverside And Crazy”