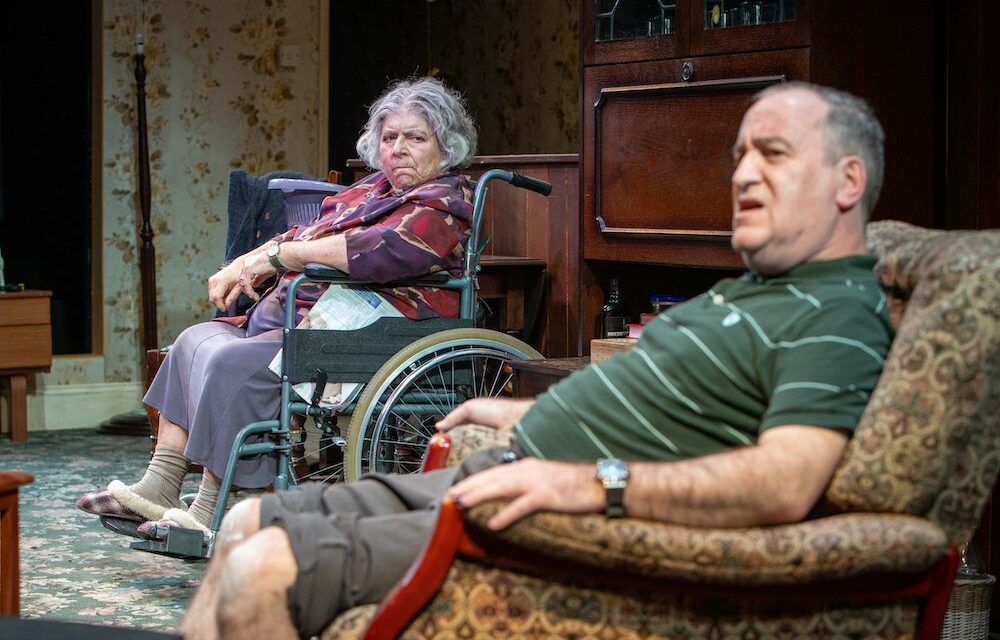 Miriam Margoyles and Mark Hadfield in "Sydney and the Old Girl." Photo: Pete Le May.

Actor Miriam Margolyes is a phenomenon. Not only has this Dickensian specialist starred in high-profile shows both here and in Australia, a country whose citizenship she took up in 2013, but she is also Professor Sprout in the Harry Potter films. And a familiar face from television. And a voice on the radio. The program lists her 12 major awards. Now she returns to the Park Theatre, having starred in its sellout show Madame Rubinstein a couple of years ago, in a family drama by another Park returnee, actor turned playwright Eugene O’Hare, whose bleak debut, The Weatherman, provoked controversy in its depiction of human trafficking here in August.

In her shabby East London flat, seventy-something Nell Stock (Margolyes) lives alone with her son, fifty-something loner Sydney. It’s a very odd situation. Although he has tried to leave home, he’s never quite managed it. Both mother and son are stuck in a mutually contemptuous relationship, both aware of the emotionally devastating effect of the death, many years ago, of Bernie, Sydney’s brother who had Down’s Syndrome. Guilt and mutual recriminations are the emotional fuel that binds Nell and Sydney together. Despite his boasting about the friends he meets down the pub, the family’s sole visitor is Marion, an Irish home help who also volunteers for an orphan charity. Can she help mother and son reconcile their differences, or will one of them use her as a pawn in this domestic power struggle?

At first, this play begins as a comedy, not of menace so much as disparagement. Aptly enough for Guy Fawkes Night, when the show opened, the putdowns flash and bang occasionally, but too often they are damp squibs. Neither “Old Girl” Nell nor Sydney are attractive figures: she is barely able to move from her wheelchair and is consumed with self-pity, despite the fact that she is something of a bright old bird. Sydney is the more troubled of the two: he is a paranoid virgin eaten up by hatred — of his mother, of women, of gays and of non-whites. His prejudices sting the ears and are hard to swallow.

O’Hare writes with some flair, in a powerful but emotionally narrow way. He indulges Sydney’s homophobia and racism with a confrontational intent that is both unpleasant and a bit alarming. The insults traded between Nell and her son — “deaf old snatch” he calls her — are initially funny in an in-yer-face way, but soon become oppressive and repetitive. As Marion gets drawn into this dysfunctional family, the plot gradually quickens, although O’Hare is unable to avoid longueurs when nothing very much happens. His viciousness reminds me of Martin McDonagh’s The Beauty Queen of Leenane, but without that playwright’s imaginative wit. In the end, the struggle between black comedy and sheer melodrama ends in the victory of excess rather than sense.

While there is nothing wrong with a truthful account of family hatred, and British theatre could do with having more plays about ordinary people who have ordinary prejudices which liberal audiences don’t share, it is still right to expect a new play to tell you something new. If that rare beast, the right-wing play, is to be successful, it needs to provoke sympathy for its central characters, and O’Hare’s doesn’t do that. Neither does it analyze the social implications of Sydney’s paranoid fantasies. In the end, you are left with a bleak account of a mutually destructive mother-and-child relationship, and the feeling that it is impossible to change a person’s prejudice. This makes you long for even a brief glimpse of redemption.

For fans of Margolyes, most of this might not matter. She’s a great trooper, dominating the stage with a positively Dickensian determination and presence. Her performance is full of expressive grimaces and wonderfully earthy verbal flights, and at times she infuses Nell with a solid Cockney humanity, her perceptions sharp and her tongue as hard as a cosh. Several moments are sheer delight. Mark Hadfield’s Sydney is more uneasy in his role, and Vivien Parry is suitably supportive, but, as written, her role is not fully convincing. Director Phillip Breen’s production, with a meticulously grubby set by designers Max Jones and Ruth Hall, offers some flashes of fun, but O’Hare’s sensibility too often feels like it’s narrowly sadistic, mercilessly cruel and thoroughly unpleasant.

Sydney & the Old Girl is at the Park Theatre until 30 November.

This article was originally posted at http://www.sierz.co.uk and has been reposted with permission. To read the original article, click here.