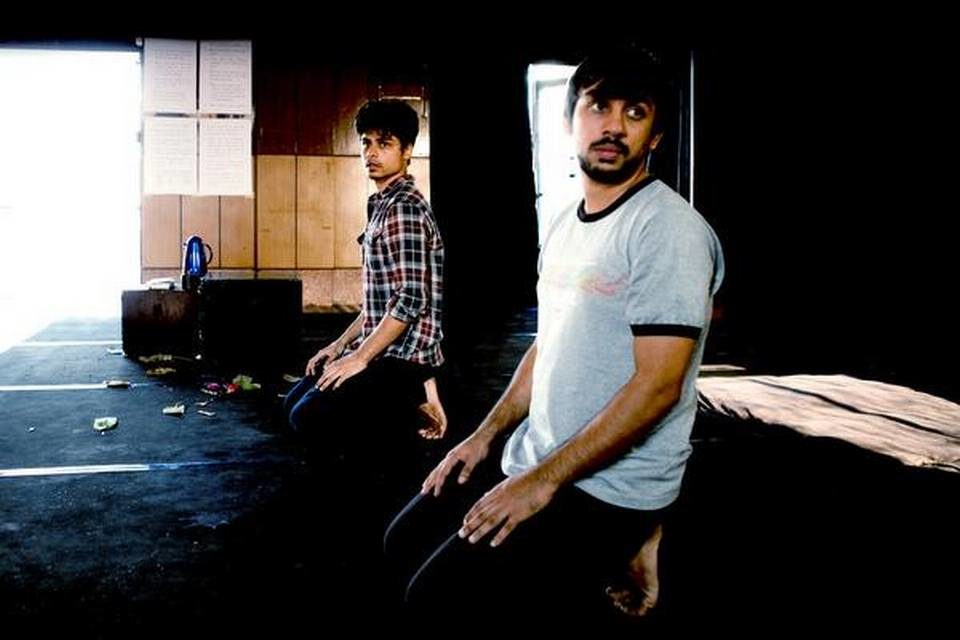 "Those Left Behind Things": Gandharv Dewan and Rushab Kamdar

In the midst of external turmoil, how does one battle with one’s inner demons? In a world where borders are only growing instead of diminishing, what does it take to navigate the space to be yourself? Directorial debutant and writer Vikram Phukan explores just that, in his upcoming play, Those Left Behind Things. Phukan, The Hindu’s theatre columnist is also a prolific writer for the paper on performing arts and film. Phukan’s drama follows the journey of an Iranian asylum-seeker Hamid (Gandharv Dewan), and other compatriots.

Those Left Behind Things is about the consequences of displacement and migration on the individual. He describes it as “[an examination of] the shifting signposts of desire, and the inextinguishable human spirit.

The story was born from a disturbing encounter that Phukan experienced during his time in Nottingham, the United Kingdom in 2004 while working in the financial sector. An Iranian-Kurdish refugee, whose application for asylum in the country was in jeopardy, had stitched his eyes, ears, and mouth shut. He wanted to set himself on fire if his plea was rejected. Phukan was witness to the disturbing news event on both television and in person since the refugee was protesting a few blocks away from the director’s home.

“I was an immigrant myself, albeit on a work visa, whose position in the country was secured by sheaves and sheaves of paperwork. So it was a stretch to fathom the persuasions of those who could simply tear up their passports at will,” states Phukan in his director’s note.

His mind, swirling with thoughts of the instability of one’s nationality, and personal strife, prompted a piece he wrote a decade later. Initially written for the National Theatre of Scotland in 2014, the play was penned as a “stream of consciousness” monologue, performed by a fictional asylum seeker. It has now transformed into a full-length play performed by two actors—Dewan and Rushab Kamdar. In particular focus, are Iranian refugees seeking asylum on account of being gay, as the production traverses between the dark alleys of Tehran to the neon-lit piers in Brighton?

For Phukan the most challenging part about directing the play was putting forth his own encounters with asylum seekers and their stories, into a structured narrative. Since the text arose from the subconscious, and not from a conscious process of research, it was a challenge to explain this to his actors.

“As I wrote it, I had internalized it, but how do you explain it?” Phukan asks.

He is also aware of the fact that as Indians, our concepts of immigration remain undiscussed, and these are issues that we’re not conversant within our own country.

While writing the play, Phukan was not only delving into the conflict that comes with seeking a home but the internal struggles of being homosexual in a land where it’s unacceptable.

“You maybe repressed by a certain identity back home that may tend to affect other areas of your being. You’re conditioned to be secretive,” he elaborates.

With Those Left Behind Things, Phukan is exploring how this secretiveness might creep into a relationship, struggling to be mentally intimate with a lover on account of a different kind of conditioning.

He finds hope while noting that people find a way to express what they’re experiencing no matter the circumstance.

Talking about homosexuality, he says, “Even in the 60s, people were finding a way to create a life for themselves, one that reflects your sensibilities. Even in the biggest repression, the human spirit is not totally curtailed,” emphasizes the playwright/director.

The production has been in the works since November 2017 and has largely taken form in the rehearsals themselves. Those Left Behind Things explores movement through spaces, navigating through a pub, detention center, and even a laundromat.

“A lot of our rehearsal time was spent in hours of conversation, and an understanding of the LGBT community,” shares Phukan.

While Dewan was mostly working with the text presented to him, Kamdar was playing with non-verbal text.

“We call it the parallel play. We were working with something that was unscripted, but still a part of the performance,” he shares.

Since the stage production has been on for a span of two years now, the play will be accompanied by an exhibition of photographs by Punit Reddy, who has spent a large amount of time documenting the cast. The photographs follow the play’s themes of migration and assimilation, which are also carried forward in art prints by artist Syed Ali Arif, from his Identity series (acrylic on canvas, 2008). The paintings explore ways in which religion impinges upon a person’s individuality.

Phukan was careful to write his script in a way that it never seemed dated. His idea was to highlight the stories of a few people to bring to light the stories of thousands. Those who are battling, and continue to battle the atrocities of societies and governments. Seeking a balance between resilience and vulnerability, the director attempts to build on his personal narrative, summing it up in a dialogue, “I collect the destinies of these people in my box of left behind things.”

This article was originally published in The Hindu on January 30, 2019, and has been republished with permission.