At “The Mountaintop” There Is Doubt, Uncertainty And Humanity: Katori Hall’s Play About King’s Final Night Before His Assassination 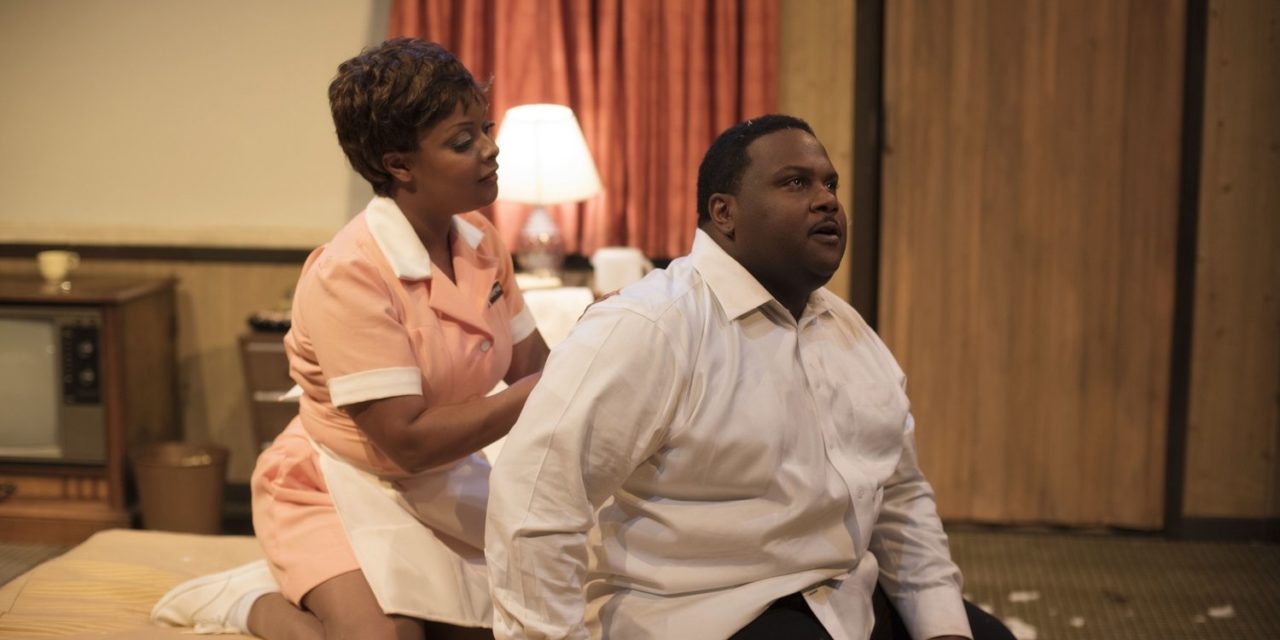 One of the first things we learn about Dr. Martin Luther King Jr. in The Mountaintop, Katori Hall’s play about King’s final night before his assassination on April 4, 1968, is that he has a hole in one of his socks. He’s just entered his no-frills room at the Lorraine Motel in Memphis, Tenn., the motel where he’ll be shot the next day. Tired, frustrated but still seized by his endless battle for social justice, King shucks his shoes, and his left big toe pokes out of his sock for all the world to see.

It’s a moment of vulnerability, of imperfection in a man who–in Hall’s take on him–knew he was imperfect but whose great challenge is to accept that fact.

Played with conviction by Tristan D. Lalla in this production at the Great Canadian Theatre Company, King seems caught between the Biblical injunction “Be ye therefore perfect, even as your Father which is in heaven is perfect” and the fact that he’s human and therefore incapable of perfection.

His failure to accept the latter is a form of spiritual pride–unsurprisingly, religion plays a central role in The Mountaintop, not least when Lalla breaks naturally into the rhythms of a preacher–but it’s also a measure of King’s drive to lead people back to the path of righteousness, which he sees as his appointed role on earth.

In other words, King is a deeply conflicted person. He’s riddled with fear, doubt, and uncertainties as much as he’s convinced his route to the peak of the mountain is the right one. He’s kind of like the rest of us, but with an inextinguishable fire in the belly that most of us experience only intermittently.

King and his big toe are not alone in the motel room. God, presumably, is around somewhere, but so is Camae, a chambermaid who brings King a coffee from room service, strikes up a bantering conversation, and sticks around. It’s tough to talk about Camae without setting off spoilers left, right and center. Suffice to say her job (there is a deep respect for work in Hall’s play) is to help lead King to self-awareness, to make him question whether his strategy of love and non-violence is workable, and to inculcate a willingness to pass the baton of social justice to those who will follow him.

Played by Letitia Brookes, who, like Lalla, was on the National Arts Centre stage last season in the hip-hop-based Sal Capone: The Lamentable Tragedy Of, Camae is the skeptical foil to King’s relentless passion. He gesticulates, paces soars into sonorous tones. She cocks an eyebrow. He thinks he has to trail clouds of glory. She says simply, “I’m better at cleaning up other folks’ messes than my own.”

For all their differences, they’re immensely physical, he by dint of his sheer presence, she in sensual movement. The anonymity of a motel room with two beds is a temptation.

Under director ahdri zhina mandiela, Lalla and Brookes roll out this story in fine fashion. The two actors mesh, carrying the play from initial naturalism through its shift to a more metaphysical realm.

Danger also percolates through Hall’s script, which, particularly in King’s final lines, could still use some minor trimming. The story takes place in 1968 and, as King points out, a black man of the time wasn’t safe in a pulpit because a pulpit is a pedestal. Those on pedestals–there’s that allusion to false pride again–are always targets, as we saw in 1968 and know in 2019.

King was not without fear; in fact, he was riddled with many forms of it, as Hall’s story makes clear. At the same time, as King himself says in the play, “Fear makes us human.”

The Mountaintop is a Black Theatre Workshop and Neptune Theatre production. It was reviewed Thursday. At the Irving Greenberg Theatre Centre until Feb 10. Tickets and information: GCTC box office, 613-236-5196, gctc.ca.

This article originally appeared in Captial Critics’ Circle on January 30, 2019, and has been reposted with permission.