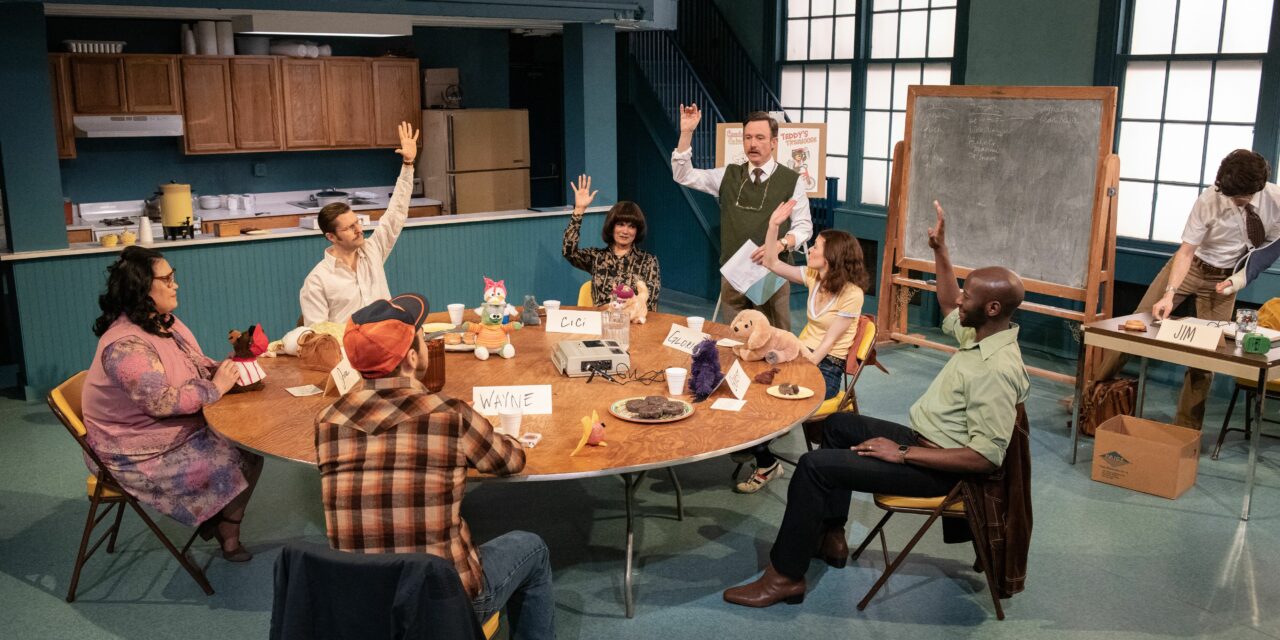 How do I love Mrs. Murray’s Menagerie? Let me count the ways. Extraordinary attention to detail, captivatingly committed performers, songs that are no less catchy for being incidental, and wicked bad hair on heads and faces. It’s also, in a subtle way, a site-specific performance. A production of Ars Nova, Mrs. Murray’s Menagerie is staged not in the theater’s Hell’s Kitchen headquarters, but in Greenwich House, a multi-purpose community space in the Village where the current slogan is “More than 100 years of helping individuals lead more fulfilling lives.” Mrs. Murray’s Menagerie, both the show and the show-within-the-show, has the same goal. The theme song goes:

Don’t forget you can always make tomorrow a little better

Just by being the absolute very best version of you!

Don’t be sad, be glad, ’cause you’re good just as you are!

But if you want to change, there’s only one thing you can do.

If you believe it, you can be it!

The premise of Mrs. Murray’s Menagerie is a focus group for parents of children who watch the eponymous kids’ show. There’s no plot, not in an Aristotelian sense (although it does deliver pity, fear and catharsis), just the task at hand: to find out how these five parents and their children feel about Mrs. Murray and her associates, which includes both puppets and friendly neighborhood folks. It’s a television show, you quickly realize, in the same family as Sesame Street Mr. Roger’s Neighborhood or Mr. Pickles’ Puppet Time, the show-within-the-criminally-overlooked-show Kidding. As their interlocutor Dale, fully embodied in Bard Heberlee’s unswerving performance, works through his ream of questions, we come to learn a lot about the television show, and just enough about the people in the audience, the people, as the song goes, that you meet each day. It amounts to the most fun I’ve had in the theater since the first Ars Nova production I ever saw: Natasha, Pierre and the Great Comet of 1812. 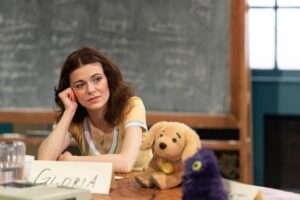 Stephanie Wright Thompson, with Benny the Dog and the Misunderstood Monster. Photo by Ben Arons Photography.

Mrs. Murray’s Menagerie, directed by Lila Neugebauer, is the latest show by The Mad Ones, a collaborative ensemble theater company. Every performer in the show helped develop it, and in the program, they’re all credited for both acting and writing. There’s not a weak link in the cast. Dale is joined by his assistant Jim (Marc Bovino, the co-Artistic Director of Mad Ones, in an almost silent obsequious role) who wears one arm in a sling, despite his partially secretarial role. They are there to survey Ernest (Phillip James Brannon), Wayne (Michael Dalto, who also wrote the songs), June (the hilarious Carmen M. Herlihy), Celeste “you can call me CiCi” (January LaVoy), the familiarly obnoxious Roger “call me Rog” (Joe Curnutte) and Gloria (Stephanie Wright Thompson). Thompson gave the most compelling performance, complaining of not being confident but shooting her hand up when her turn had been skipped. She put so much thought into her physical carriage, I could barely take my eyes off her.

An obvious benefit of The Mad Ones’ approach is that every character is fully developed even beyond what you see them do in the play; it’s clear that each one of them, and their families, have lives and histories beyond what unfolds in these 90 minutes. My one regret is that, because the show is entirely staged with the cast sitting at a round table, I became more invested in the actors’ whose faces I could see the whole time. (To wit, Gloria was at my twelve o’clock). But I have no doubt that those whose backs were to me were working just as hard. Other than that unavoidable sacrifice, the staging was spot-on. I don’t know what state The Mad Ones found the performance space at Greenwich House in, but, with its kitchenette and cheap furniture, it was hard to believe it was ever anything other than the set for this play. 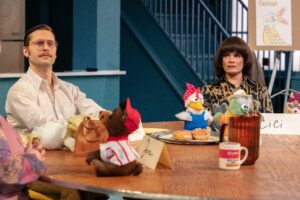 Their other shows, like Miles for Mary and The Essential Straight and Narrow, tackle nostalgia and American mythos in a way that is neither cynical nor an apologist. Mrs. Murray’s Menagerie, set in 1979, touches on racism and gendered discrimination lightly yet unmistakably, like a too-long handshake. Mrs. Murray herself never appears onstage but we learn about her, some of which is immutable, some open to interpretation. She’s black, she can sing and she lives surrounded by animal puppets. Is she a professional singer, or does she have any kind of job? Do these puppets live with her, as in The Curious Creations of Christine McConnell, or do they simply reside the same chaotic universe, and what rules govern their lives?

It turns out, each of the parents have definite opinions on these questions. One of my favorite moments in the play is a discussion of which puppets have agency and which have a human-animal relationship with Mrs. Murray. As to the question of whether Mrs. Murray keeps a clean house, June points out that she has mice, which, for her, are different from other animal puppets, like the riveting chicken Rosie: 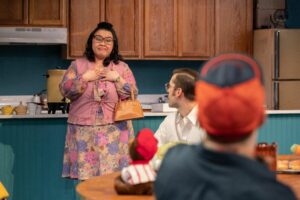 “The mouse is a puppet mouse. They don’t possess human qualities like chicken. We don’t ever see the mouse helping the chicken fix cars. I appreciate that Mrs. Murray’s house is somewhat chaotic. And messy. Which makes her human. Which she is on the show. A human. With a mouse problem.”

It made me wonder if my parents ever debated the qualitative differences between, say, Cookie Monster and Oscar the Grouch. I never even realized that Snuffleupagus was Big Bird’s imaginary friend. I read about it when I was in college. The world of tv’s Mrs. Murray’s Menagerie is so fully imagined, when Dale asked the parents which neighborhood figure they would trust to watch their children, I caught myself thinking, “The librarian Madame Chronicle of course!” It was the only question the focus group answered unanimously.

As the focus group progresses, alliances are formed and differences are recognized, all non-verbally. The group members organize themselves around race, gender and class, all of which of course intersect, and puppet preference. Dale, at the helm of the survey, has a potentially explosive situation on his hands, and he has to guide the conversation so that it stays on focus. But what is the focus really? The market appeal of Mrs. Murray, or how Mrs. Murray fits into the American discourse of parenting, community, and entertainment? A focus group is a baldly cynical capitalism mechanism, but it has its merits. It’s one of the few times where strangers come together in a physical space to speak with complete honesty. Their input is for the market survey it’s true, and yet…

Don’t forget you can always make tomorrow a little better

Just by being the absolute very best version of you! 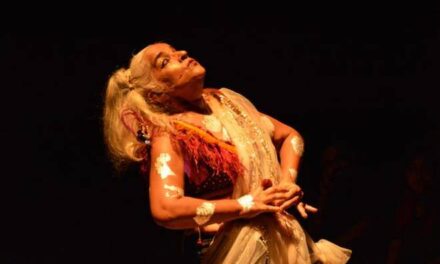