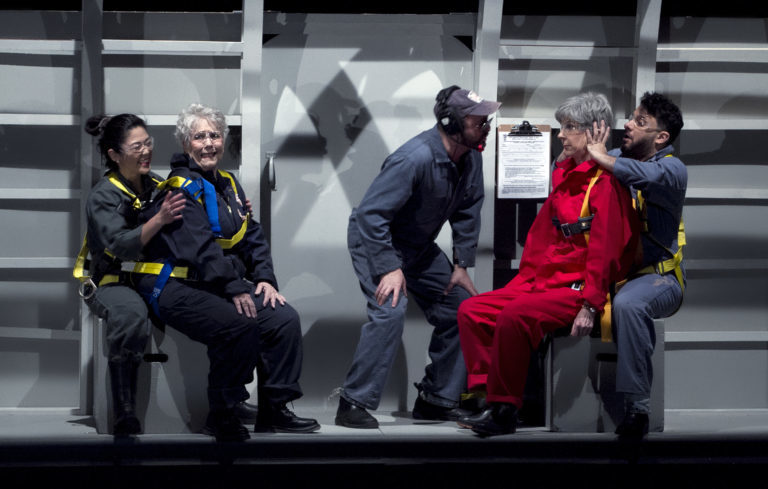 David Lindsay-Abaire in his earlier works was a master of television style sit-coms and Ripcord immediately sets us on this track. A clear-cut situation with types who obey the personality clues that the author sends our way right from the beginning when director Riley Stewart’s lively music captures our imagination as we picture two women of a certain age dancing gayly to a sprightly Latin American rhythm. Needless to say, the music immediately creates an uneasy opposition between Andréa Vecsei’s beautiful pastel colored warm looking room in a seniors’ home where all seems to be snugly comfortable and loveable, and the vicious tension burning between the two principles of the show.

We are in the midst of a serious face-off between Abby and Marilyn who share a room in the Bristol Place Senior Living Facility in Suburban New Jersey. Misanthropic, morose, gloomy and cynical Abby minus the New Jersey accent (played by Jane Morris who slides into her role with uncanny realism) is constantly steeped in the books she reads on her I pad apparently oblivious to the world around her. She wants to be alone, she hates noise and she can’t stand the presence of the happy, talkative, and fun-loving Marilyn (Sharron McGuirl) who bursts into a room like an explosion of fireworks covered in flashy material and blinding colors. Costume designer Peggy Laverty quite outdid herself with this one.

These conflicting behaviors are interrupted from time to time by the good-natured Scotty (Max Thibault) who tries to arbitrate the complaints in the Home and whose performance, at first rather stiff, becomes more relaxed and playful as his character captures the spirit of events.

Act I is a sequence of light-hearted banter peppered with sudden comic insults that don’t seem to annoy Marilyn but that truly incite Abby to more cruel responses because she just wants her roommate to “shut up!” For her part, Marilyn digs in her heels and refuses to leave their shared space, responding to her own slightly sadistic streak that has her taunting Abby non-stop. Who will get the better of whom? That is the question.

Thus things escalate to an unbearable point after their visit to that haunted house clown performance which was supposed to transform us, by introducing us into a new theatrical world but the staging of that moment fell terribly flat. The lighting did not do justice to those masked creatures and strange shapes that crept around in the background suddenly pouncing into view. A rather lackluster treatment of moments that could have been much stronger theatrical statements dealing with such a scary Hallowe’en event. However, that scary moment triggers the pact between the two occupants of the room and carries the play forward.

If Abby can manage a seriously angry reaction from the jovial Marilyn, Marilyn will have to get out and Abby will get what she wants: an empty room. But if Marilyn can frighten the apparently frozen-faced Abby, Marilyn’s prize will be Abby’s coveted bed by the window with the beautiful view over the garden.

Clearly, it is a cruel pact leading to a no-win situation because one of them will eventually be punished by losing what she loves. The rest of the play is, therefore, a competition “to the death” of sorts. It gets nastier and nastier as each woman driving her behavior to the limit, forces her rival into difficult choices that push events to the limit of plausibility.

Curiously, however, the play becomes more and more attractive as the nastiness heats up and one finds oneself caught up in these dangerous exchanges leading one to question this portrait of older women shown as a pair of ridiculous ladies not able to control their emotions. We just have to assume that the playwright betrays the thinking of a faraway time frame especially since he is quoted in the programme stating that there are “few well-written female characters” which certainly puts him way back in another time frame, perhaps responding to forgotten TV hits of the past which we won’t bother to mention.

The evening, however, works in various ways that are mostly successful. The performances of Jane Morris (Abby) and Sharron McGuirl (Marilyn) are impeccable and a great pleasure to watch. As for the play, although Act I sets out all the traps and references that supposedly prepare the audience for what is about to happen, the playwright drowns the characters in repetition and nervewracking chatter that quickly become tiring. We do actually sympathize with Abby at that point.

The second part of the evening is much more exciting because it removes us immediately from our daily reality and sets us off on an adventure that begins like a joke but then takes us far outside the box. The structure of the stage events tightens, triggering the emotional charge of it all as new protagonists appear and suddenly bring about stunning changes. The battle begins as events take on an unbelievable twist trying to force the opponents into situations which shock the onlookers, setting the candidates into impending danger that grows even greater as the surprises never stop. Unexpected events take our breath away including visual effects that would seem to be straight out of Television but that still worked on stage, creating a sense of animated cartoons that was great fun.

The good thing is that clearly, the author does his best to titillate us with an uncomfortable sense of wanting to laugh, but also with feelings of guilt and of repressed anger towards the theatrical mastermind who was able to set us up in such an expert way while not allowing anyone to get hurt! Especially given his polished conclusion that included a slight dose of predictability so as not to upset the most sensitive members of the audience. This is a strange comedy that wants to avoid unpleasantness and with the collaboration of a director who seems to share the author’s special talents and unusual sense of humor, it succeeds!!

This article appeared in Capital Critics’ Circle on January 12, 2019, and has been reposted with permission. 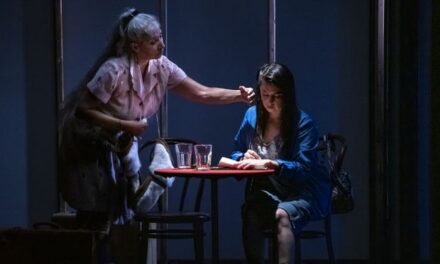