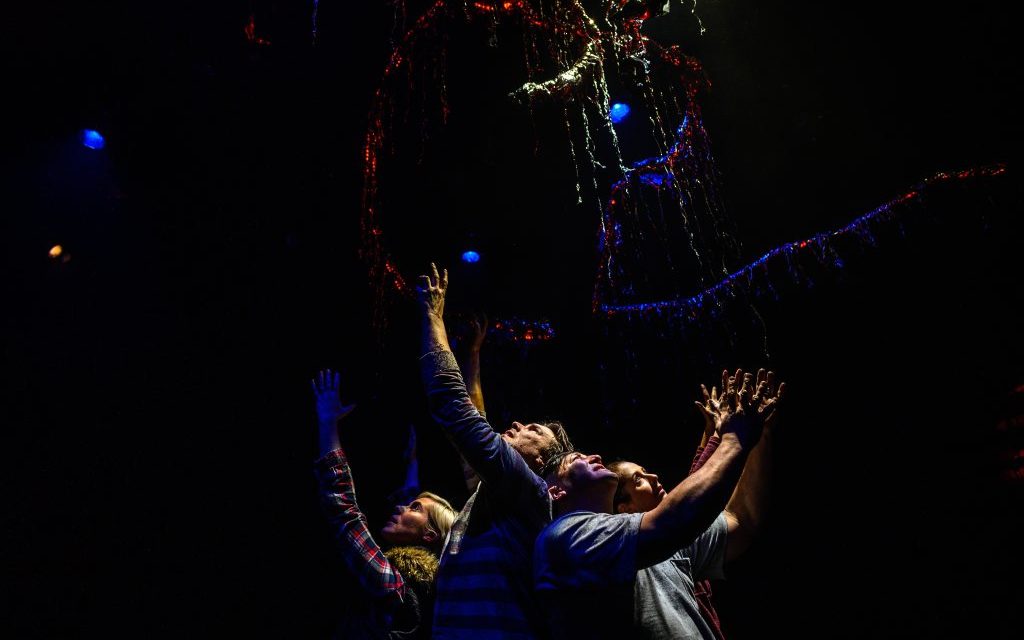 Kate Croome reviews After The Fire by Matthew MacKenzie, a Punctuate! Theatre and Alberta Aboriginal Performing Arts co-production in association with Native Earth Performing Arts and The Theatre Centre, in its world premiere:

There is a tragic duality at the heart of After The Fire, the brilliant new offering from playwright Matthew MacKenzie. Simmering under the surface, this dichotomy is not immediately apparent, though the resulting tension is clear. Darkly funny, After The Fire asks some of the most pressing environmental questions we currently face: how can we live our day-to-day lives when the threat of climate change is ever looming? How do we reconcile our own complicity in it? And, how can we unpack the privilege that aids our complicity?

Co-produced by Punctuate! Theatre and Alberta Aboriginal Performing Arts in association with Native Earth Performing Arts and The Theatre Centre, After The Fire is currently making its world premiere on the Franco Boni stage. The play’s four central characters have recently returned to their hometown of Fort McMurray, Alberta following the devastating wildfire of 2016 that destroyed over one million acres of land and incurred nearly ten billion dollars worth of damage. 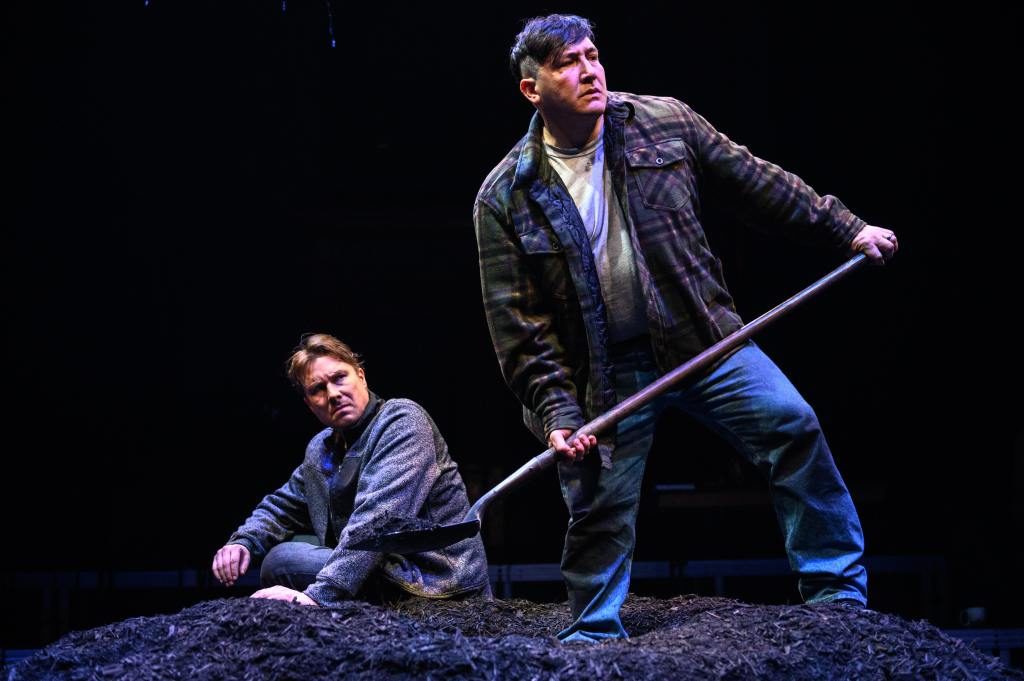 Jesse Gervais, and Sheldon Elter in After The Fire. Photo by Dahlia Katz

We don’t immediately know the situation under which we are meeting these characters. What we do know is this: Carmell (Louise Lambert) and Laura (Kaitlyn Riordan) are sisters. Laura’s house burned down in the fire; Carmell’s did not. Carmell has been providing Laura’s family shelter in her basement. Immediately prior to the action onstage, something terrible and irreversible has occurred. Laura’s handbag is mysteriously heavy. Elsewhere, Laura’s husband Barry (Sheldon Elter, MacKenzie’s collaborator in his breakout hit, last year’s critically-lauded Bears), and Carmell’s disgraced former husband, former oil industry-worker Ty (Jesse Gervais), are digging a hole.

Directed by Brendan McMurtry-Howlett, the ensemble generously explores the duality of the human element of climate change present in MacKenzie’s text-heavy script. Fort McMurray is a small community largely defined by its oil industry infrastructure, and by those who both work in and profit from that industry (including at one point Carmell and Ty and, by extension, Laura and Barry). The individuals whose narratives we are following are coded—textually and through designer Alison Yanota’s nondescript, utilitarian costuming—as working class, and suspicious of the environmental movement’s potential classism. In a recurring gag, characters express their disgust for Carmell’s new boyfriend, a hybrid-driving hipster referred to only as “Greenpeace.” Jokes aside, the ensemble plays compassionately, creating the impression of four fully realized people with wells of emotional intelligence far beyond the mere words on MacKenzie’s pages. It’s not a coincidence, I think, that After The Fire is making its world premiere in Toronto, a place of economic extremes, ongoing gentrification, and a certain bourgeois liberalism. 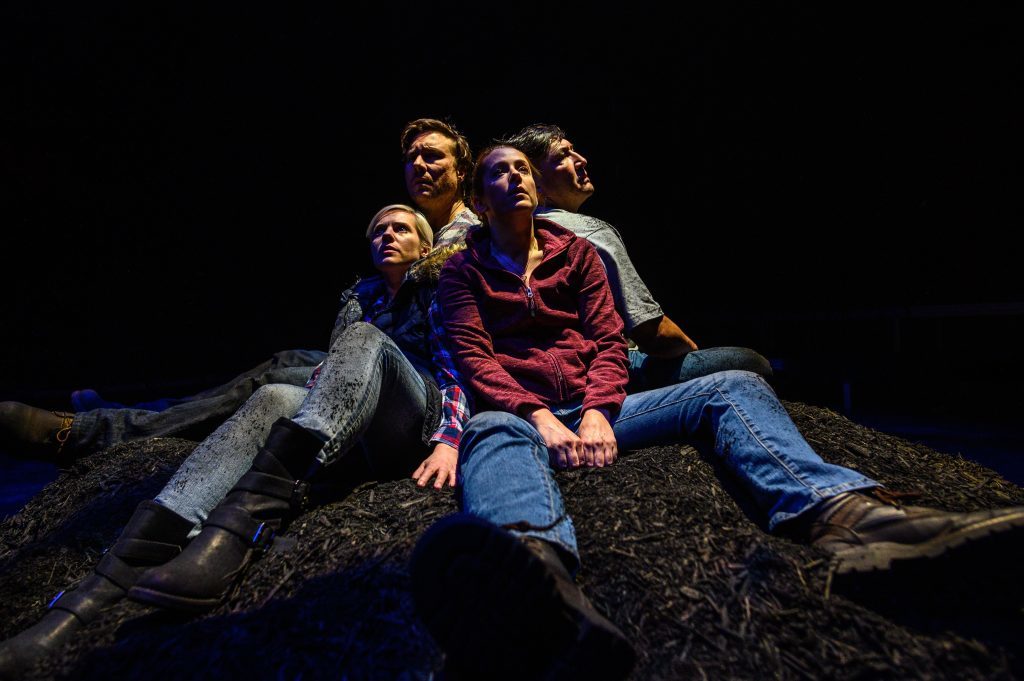 The central conflict of the piece is not only environmental but also colonial. Since the incident, Barry has been different. Now distant, he has developed an empathy for and spirituality around the diverse wildlife of Fort McMurray. He carries around a deceased two-headed chickadee in his pocket. This behavior is seen by the others to be strange and alienating; they wish Barry would return to “normal”—that he would comfortably re-assimilate himself back into the (white) status quo.

The issue of environmental damage linked to the oil industry is also both an old and new story of Canadian colonialism. Before the opening night performance, a community member with familial ties to the Wet’suwet’en Territory in British Columbia is invited to speak about the situation currently developing there. On that night, it had just been reported that the RCMP had reached an agreement with the Territory to have access to their land for the purposes of oil excavation. The speaker urges that this report is grossly skewed in favour of the RCMP by the media outlets reporting the deal. Heavily relevant to the work we are to experience, her words are a harrowing reminder that environmental disasters, at their root, are the result of the forced migrations of Indigenous peoples for the sake of industrialization. 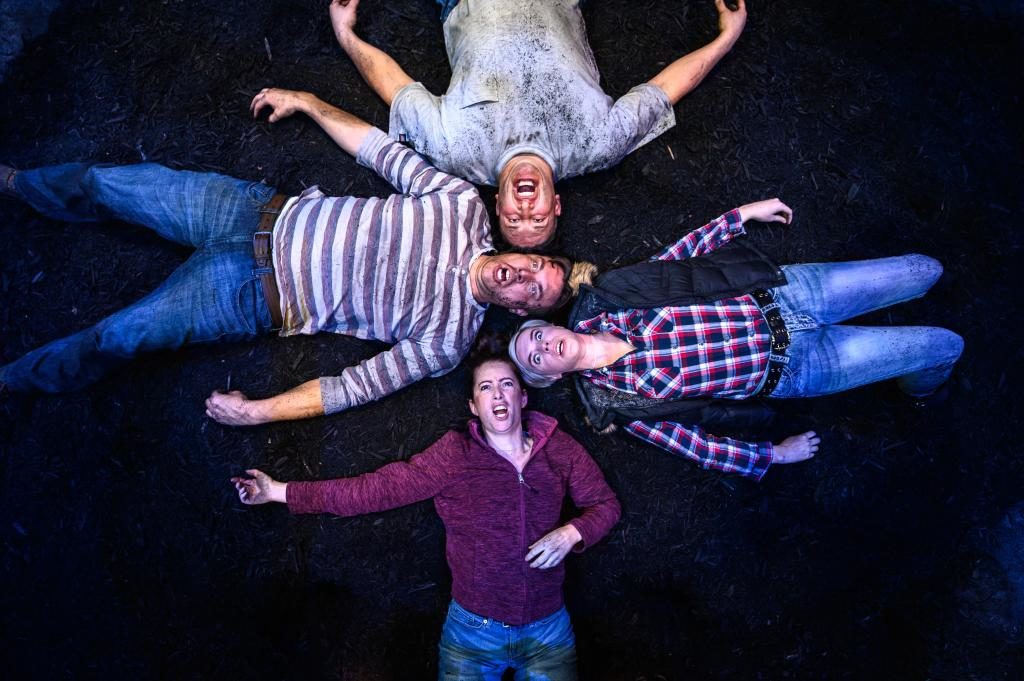 A powerful new Canadian work, After The Fire, asks vital questions about the corporations and industries profiting from environmental disaster, despite the consequences to our shared environment, the individuals who depend on and care for the land, and the history of racist colonialism in Canada’s industrial traditions. It does not provide answers. It does not even provide suggestions as to how the individuals caught in the crosshairs of climate change and colonialism can feasibly resist the powers that perpetuate it. After all, MacKenzie and his exceptional team are caught in the crosshairs too.

I believe this to be true. But after the fire come the ashes, out of which phoenixes emerge, glorious beacons of hope and resilience. That’s what After The Fire is. See this show if you can.

This article originally appeared in Alt Theatre on January 16, 2019, and has been reposted with permission.