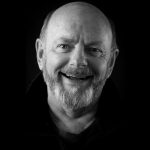 John Smythe is Managing Editor of Theatreview.org.nz. He has trained and worked professionally in New Zealand, Australia then back in New Zealand as a playwright, director, screenwriter (& screenwriting teacher), actor, theatre critic and book writer.  Theatre directing credits in Australia include plays by Shakespeare, Ibsen, and Gorki, and world premieres of plays by himself, Len Radic, David Williamson, Louis Esson, Katharine Susannah Prichard, Jack Hibberd and David O’Brien. Back in NZ he directed his own trilogy of short plays – ENTRANCING EXITS: Ms Conception; Nothing Twisted; Used Heads, at Bats Theatre, Wellington International Festival of the Arts. Playwright credits include Entrancing Exits (BATS Theatre), Conundra (Ensemble Productions), Swaggy Mack and his Magic Back Track (Arena Theatre), The Seven Stages of Hugh Mann (Melbourne University Theatre), Party Games (Jane St Theatre; La Mama) and Making A Play (Melbourne Theatre Company; Central Theatre), Where There’s a Will (BATS Theatre). Unproduced plays include Thelma, Weather and The Virtues of Reality. John has also written The Peace Monster (Vintage, 1991); Downstage Upfront: the first 40 years of New Zealand’s longest-running professional theatre (Victoria University Press, November 2004) and The Plays of Bruce Mason – a survey (VUP & Playmarket, November 2015). OPO – The Peace Monster is also published as an e-book (Amazon and SmashWords).  Before becoming the founding Managing Editor of Theatreview New Zealand in 2006, John was a theatre critic for The Melbourne Times, The Australian, Theatre Australia Magazine, and in NZ, The National Business Review.

Zoom became the tool-de-jour for work meetings and social interaction with family and friends – and its potential for creating Lockdown Theatre was immediately explored, using either Facebook Live or YouTube as platforms for the recorded shows.

Distills the Big Themes of Political Intrigue with Insight, Flair, Withering Wit, and a Welcome...

Vladimir and Estragon, who nickname each other Didi and Gogo, languish nowhere in particular and...

In Welcome to the Murder House, Alfred’s story is told, in the popular vaudeville style of the day, by a group of prison inmates. For them, Southwick is a hero, given their shared belief that execution by electrocution will be more humane than hanging. And, as with the development of all high quality theatre, it takes a lot of trial and error to get it right.

POTENTLY RELEVANT Warning: I’m about to give the (well-known) ending away because the play can’t...

It captures a time when Māori were increasingly dispossessed of their lands and Chinese immigrants were subjected to appalling discrimination – not least (and I didn’t know this before) by the government.

“Hand to God” at Circa Theatre

If there is such a thing as typical Circa Theatre fare, Hand to God is certainly not it, yet the...

“Afghanistan is exactly like Gallipoli!” shouts Ben, well into the action of Anzac Eve. “All the...

When I reviewed the development season of The Ragged – the first play in what has evolved into THE...

Timely, relevant, engaging, entertaining and thought-provoking “You wonder if it’ll ever change,...

Adapted by The Playground Collective From the graphic novel by Nick Hayes Based on the epic poem...

Unnervingly astute political satire When The President opened in Hamilton then Palmerston North...