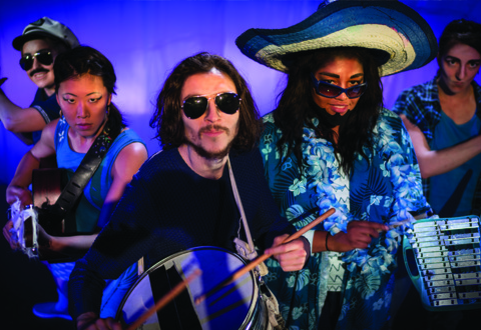 "The Rime of the Modern Mariner" by The Playground Collective. Press photo

Adapted by The Playground Collective
From the graphic novel by Nick Hayes
Based on the epic poem by Samuel Taylor Coleridge: The Rime of the Ancient Mariner
Directed by Robin Kerr
At BATS Theatre, Wellington

The annual BATS STAB season is always keenly anticipated because we know practitioners who have paid their dues in struggling co-ops have competed successfully to develop a new show with much-improved resourcing. The Playground Collective’s take on The Rime of the Modern Mariner marks the second time they have won the STAB commission, the first being Tinderbox in 2011.

As an adaptation of an adaptation, this tale has morphed from lyrically literate epic poem through dichromatic graphic novel-cum-poem to this ensemble performing arts presentation.

In his The Rime of the Ancient Mariner, written at the end of the 18th century, Samuel Taylor Coleridge’s titular Mariner waylays a Wedding Guest to tell his cautionary tale of the cursed events that followed his wilful shooting, with a crossbow, of the albatross that had guided their storm-wracked, ice-bound ship to safety. At the end of his vicariously experienced ordeal, the forlorn Wedding Guest eschews the wedding festivities and arises the following morn a sadder and a wiser man.

Nick Hayes’ The Rime of the Modern Mariner (2011) starts with a smart London gent signing his divorce papers. When he settles on a park bench to eat a rubbery sandwich and drink from a plastic cup, he is waylaid by the Modern Mariner who tells of what befell him when he hooked up with a Japanese sailor to harvest whale bone for a flash domino set. He too shot an albatross and suffered surreal experiences related to the wilful pollution of our oceans; principally the “hypoxic maelstrom” of the North Pacific Gyre. He now seeks redemption by returning to the city to wake people up to what their lifestyles have caused but the Divorcee, in his “world detached of consequence”, remains oblivious. It is left to the reader to get what he does not.

The ocean is never intentionally trying to hurt us, she reveals; she was reckless – a possible pun given it will emerge she’s left Taylor (Milo Cawthorne), her partner and the father of their daughter, an emotional wreck. This we discover as he tries to chat up various women (Grace Augustine, Ava Diakhaby, Mary Weir) at some floating social event, turning them off by compulsively telling them he is a widower and there’s a child involved. We get to choose whether to empathise with them or him.

The Wedding Guest turned Divorcee is now a Widower, then. And it is he, Taylor, a Plastics Engineer, who is destined to become the Modern Mariner in the process of taking off with his a ‘locker room’ bantering mates – Grant (Ava Diakhaby), Dicko (Grace Augustine) and Phil (Mary Weir) – for Grant’s ‘stag do’ on a fishing boat owned by Dicko. Taylor has parked his daughter with his in-laws and taken the shotgun his dad gave him for his own deer-hunting ‘stag do’ where he got to use it, experience its power and learn a thing or two.

Having witnessed some rather clunky one-off theatrical devices, like actors being used (unnecessarily) to create a bar and text messages being brandished on placards, I welcome the improved production values in the way the shooting sequence is staged. The sound effects (uncredited), Jane Hakaraia’s lighting and Amelia Taverner’s costumes combine with Trubridge’s design elements to inject sudden danger into proceedings.
The way the shotgun – obviously fake yet endowed with power – is handled and mishandled by the ‘boys’ in subsequent scenes speaks volumes about the unintended consequences of ignorance, bravado and rivalry.

We are half way through the 70 minute play when the Albatross is finally shot: another visceral moment. Their boat’s subsequent loss of power and internet connectivity, the lack of drinkable water and the need to ration their beer supply sees the male behaviour degenerate as further flashbacks from Taylor’s past reveal anti-romantic aspects of his relationship with Melissa. And a nervous Grant, whose fiancée is pregnant, seeks advice from Taylor about marriage and parenthood – not that we’ve seen any evidence of Taylor in the role of father.

Although Taylor is the only fully-formed character, with Melissa allowed a flipside and Grant being granted a bit more dimension than his mates, the Collective’s skills do generate a number of moments that hit our collective solar plexus, not least when a flare is fired to attract another boat and … [spoiler averted].  Amid all this, and the build-up to the climactic gun event, the central point about plastic waste becomes strangely muted. Yes we assume that’s what they find in the gut of the Albatross, and there is a bit of chat that I think plays with the ironic sonic similarity of Gyre (a floating swirl of garbage; there are five in oceans around the globe) and Gaia (aka Mother Earth; the goddess of all life), but neither is clearly shared with the audience.

Amid all this, and the build-up to the climactic gun event, the central point about plastic waste becomes strangely muted. Yes we assume that’s what they find in the gut of the Albatross, and there is a bit of chat that I think plays with the ironic sonic similarity of Gyre (a floating swirl of garbage; there are five in oceans around the globe) and Gaia (aka Mother Earth; the goddess of all life), but neither is clearly shared with the audience.

Because this adaptation has conflated the tale’s teller and listener into one, and his storyteller connection with the audience is more functional than strongly intentional, and as the Widower he inherits the Divorcee’s preoccupation with more immediate things, we in the audience are left adrift rather than caught in a shared surge of concern for our planet.

We are treated to a quite spectacular underwater sequence which strangely doesn’t entangle aquatic creatures (puppets by SJ Blake) in life-threatening garbage – although, while the lighting doesn’t allow us to see it clearly, I suppose they are actually made from recycled rubbish. I also become preoccupied with the silly little seal’s tail dangling inactively off an otherwise impressive whale (how is it propelling itself?).

Suddenly Taylor is speaking poetry from Nick Hayes’ book, using esoteric language to which our ears are not attuned; an odd change of gear this late in the show and yet another example of a convention used just once (disregarding ‘the rule of three’).

But visual language does tell us he has fetched up on shore … and the final image [spoiler alert] is of his reuniting with his daughter: a moment compromised by the diminutive puppet being largely obscured by her three puppeteers (rods are needed to keep them at arms’ length).

The potentially redemptive value of this resolution is lost because although we have heard mention of her, we have never seen the unnamed daughter before and no relationship, or even non-relationship, has been established. Instead of empathising with Taylor and feeling heart-warmed, we are busy processing this new information intellectually in order to join the dots.

Presumably, she represents the next generation for whom Taylor’s generation must take responsibility when it comes to the world they will inherit, but some serious dramaturgical engineering has to be done to make this point land in our hearts and guts in one impactful moment.

While dramaturgy is credited to Molly O’Shea and Eli Kent, no-one is named as ‘writer,’ as such, and it is the lack of narrative structure, thematic cohesion and textual clarity that lets The Rime of the Modern Mariner down. The cleverly crafted production elements would be a great deal more effective if they served the story and its message rather than vice versa.