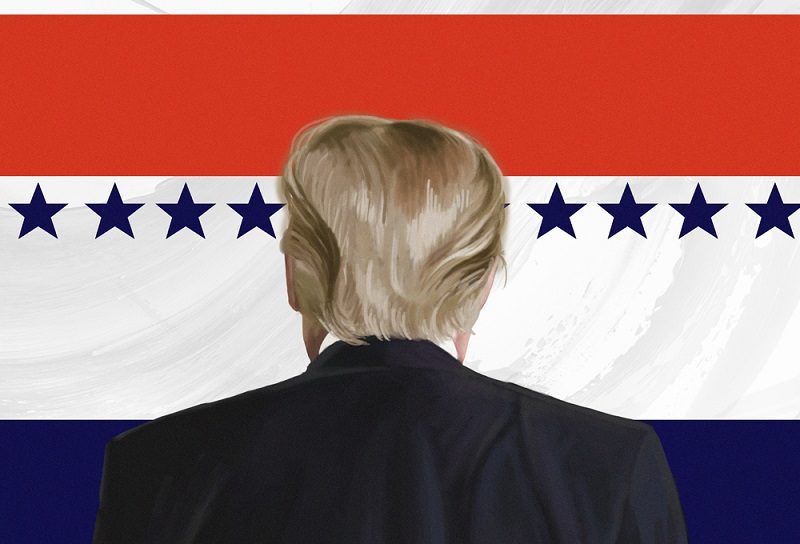 When The President opened in Hamilton then Palmerston North last week, a poll-fed complacency was settling in: Hillary Clinton Was going to become the next President of the United States (POTUS); Donald Trump would lose. Then came the great Comey over-reaching of his supposedly apolitical FBI position (summarised here) and now it’s anybody’s guess what the outcome will be.

The premise of Alexander Sparrow’s latest solo show is that Donald Trump has settled into the White House and we are being treated to the outline for his next book: indeed there’s a promise that whoever among us takes good notes and presents the best plan will get the book deal. (Yeah right – until he find fault with some detail of grammar or layout and so refuses to pay?)

Following a sonic medley of media soundbites and an impressive swirl of red-white-and-blue floodlights, Sparrow’s Trump saunters in fresh from the tanning room and hair-dresser in a white bathrobe and fluffy slippers. “We did it,” he crows. “It’s unbelievable, believe me.” Yup – the oxymoron king is in our faces big league.

There is plenty to chuckle at initially: Sparrow has Trump’s trademark phrases, intensifiers and hand gestures down to a T (aka tittle, rhymes with little); the size of various appendages comes up for discussion; we find out what the Trump Dump is … His name-dropping Salman Rushdie as a big fan is a well-timed lie for those who have seen the Booker Prize-winner’s 1 November Facebook post.

When he regales us with the tale of how he’s become POTUS (via an atrocious contravention of the Constitution: are we surprised?), the way Trump tells it is such a powerful reminder of his sociopathic – if not psychopathic – personality, our capacity to relax back and have a good laugh is severely tempered.

As astutely directed by Patrick Davies, the hour is neatly pitched to provoke our political sensibilities. It is all delivered with such casual confidence, we get a good sense of how vigilant we must be not to accept any part of it as the new normal.

Visually the play is structured as the reverse of a strip-tease (a dress-please? Yes – please dress!) with good gags involving the difficulty of gesturing and dressing simultaneously. We need such light relief.

For the avoidance of doubt, the president’s ultimate plans become increasingly outrageous yet remain totally consistent with Trump’s value system. What’s unsettling is the realisation is that a number of ‘great leaders’ with the same modus operandi are in power right now around the world. That we also recognise them from recent right through to ancient history offers no comfort; quite the reverse.

This week, The President is an unnervingly astute work of political satire set in the not-too-distant future. When it opens in Auckland, at The Classic Studio, the election results will be coming in. Audiences will know whether the light up ahead signifies the end of the tunnel the ‘free world’ has felt trapped in, or the freight train hurting towards us; they will know nature of the bullet they have dodged or sit mesmerised at its approach.

Either way The President is an entertaining way to bear witness to an extraordinary moment in history. Grab the opportunity – Trump: the Musical (which I am sure a number of creative people are working on right now) is a while off yet.