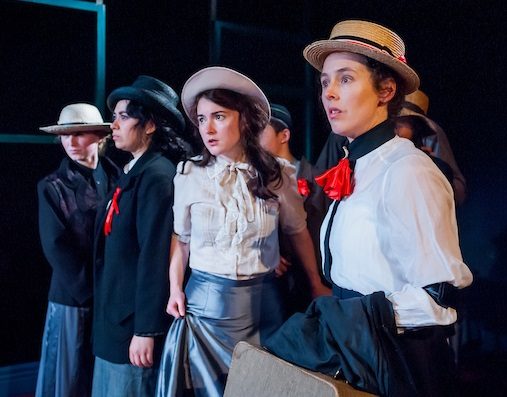 “You wonder if it’ll ever change, don’t you,” says Waihi gold miner’s wife Katherine Beech at the end of Lorae Parry’s Scarlet & Gold; “if in a hundred years’ time, will it still be like this.” That was 1912 – and the past is now.

“The 1912 Waihi Goldminers’ Strike changed an industrial law in New Zealand, and out of the ashes of that bitter battle, the New Zealand Labour Party was born. It’s over a hundred years since that strike finished, yet the fight for workers’ rights still continues to resonate today,” writes Parry in her programme note. “The spirit of those men and women lives on today, as we have so clearly been reminded by the life and courage of the late Helen Kelly, and by all those who share her commitment to solidarity, justice, and equality.”*

Labour Unions [in New Zealand] were kneecapped by the Employment Contracts Act in 1991, the rise of individual employment contracts has decimated the culture of worker solidarity and the gap between the haves and have-nots is ever widening. Brexit and the Trump campaign have brought anti-social, even fascistic, traits to the surface that we’ve been shocked to see prevail in our 21st century ‘first-world civilization’. All this is resoundingly relevant to Scarlet & Gold.

A couple of early settlers (Jon Pheloung and Cary Stackhouse) follow rumors of gold to the Coromandel, ready to hack at the whenua with pick and shovel until a Kuia (Maia Diamond) challenges and evicts them from her iwi’s urupā. This powerful reminder of a different value system heralds the gold rush that gave rise to the company mines which operate in Waihi to this day, albeit with technology far advanced from the hand tools used in 1912.

In London, Charles Ashton (Todd Rippon), his wife Jane (Lorae Parry), her unnamed suffragette sister (Carmel McGlone) and another gentleman (Patrick Davies) return from the opera chatting about Charles’ appointment to head a Gold Mine, and chair the Bank’s board what’s more, “half a world away” where women, astonishingly, have the right to vote!

In Lisa Maule’s minimal set, ingeniously enhanced by her lighting design, a posh curtain gathered in gold braid denotes the upper-class domain, in stark contrast to the rough window frames that suggest the Waihi workers’ homes. The combined aesthetic of Parry’s crafted text, David Downes’ sound design of birdsong and musical snippets, the definitive costumes designed by Pinky Agnew & Jocelyn Frances O’Kane, and Kate JasonSmith’s inconspicuous directing, allows the action to flow seamlessly between four homes, the miners’ hall, the streets and even, briefly, into the mine itself.

Scenes of family and social activity establish the workaday lives of the Beech, O’Connor and Evans families. The burgeoning romance between Emma Beech (Isobel MacKinnon) and Thomas O’Connor (James Gordon) leads naturally into a spirited rendition of ‘By The Light of the Silvery Moon’ – the first of many quality contributions from musical director Laughton Pattrick and choreographer Jan Bolwell – bisected by a shocking but brilliantly staged explosion in the mine.

The wounded include Joe Beech who will be out of action for weeks with no pay, leaving his wife Katherine (Emily Regtien) and daughters Emma and Molly (Lola Gonzalez Boddy) to fend for themselves.

With 14 deaths at the Waihi mine in the last year, it is this latest workplace accident that sparks concerted union action, led by Bill Parry (Todd Rippon), an Australian now living in NZ with his wife Georgina (Carmel McGlone). But once they strike, as the weeks roll into months (six in total), it is the women of Waihi, led by Katherine Beech, who become the most voluble activists.

Bill Parry, by the way, was Lorae Parry’s great great uncle, hence her special interest in this story. And her fidelity to historical truth brings incontrovertible power to the play as we are shocked to discover how badly workers and their families were exploited by the myopically insatiable forces of capital before a political party was formed in the hope of redressing the balance.

Thomas and his dad, Paddy O’Connor (Patrick Davies) are both miners and the generation gap widens between Paddy’s commitment to socialist values and Thomas’s pragmatism, brought on by his wanting to be a worthy suitor and good provider for Emma. Mum/wife Grace (Lorae Parry) has to balance her loyalty to both with her own growing participation in the struggle – especially when the men, including Paddy and Thomas, are imprisoned for 12 months for ‘using insulting language’ having refused to sign a bond to ‘keep the peace’ which, it’s clear, would outlaw even peaceful protest. Grace still has to feed herself and their younger boy, Bobby (Jack Archibald).Then there is stationary engine driver Fred Evans (Jon Pheloung) and his wife May (Alexandra Taylor). In solidarity with the exploited miners, Fred chooses not to join the breakaway engine drivers’ union. His low-key affability and willingness to help out wherever needed

Then there is stationary engine driver Fred Evans (Jon Pheloung) and his wife May (Alexandra Taylor). In solidarity with the exploited miners, Fred chooses not to join the breakaway engine drivers’ union. His low-key affability and willingness to help out wherever needed makes him arguably the least deserving of the place history has marked out for him.

Meanwhile on the affluent side, Charles Ashton frets about the falling share price caused by the strike while Jane worries about her suffragette sister who has been imprisoned back in London. Their only servant Annie Burgess (Carmel McGlone), whose son is a miner, has conflicting loyalties but when appraised of Katherine’s predicament she seeks a placement for her with the Ashtons, which brings out Jane’s compassion too. But of course, the final decision always rests with the man of the house.

The advent of Reform Party leader William Massey as Prime Minister (having ousted the declining Liberal Party with a no-confidence vote in the bleak midwinter of 1912) increases political and public opposition to the strikers, whose commitment to peaceful resistance is sorely tested. When the inevitable happens, the illusion of visceral violence is skilfully rendered under the expert tutelage of fight choreographer Ricky Dey.

There are many memorable scenes that distil the abiding truths of class struggle: the butcher giving free sausages to the wealthy, along with the purchased prime cuts, while refusing credit to the desperately needy because their prospects for income are so bleak; the ever-changing dynamic between the young lovers; the ruthless name-calling the kids inflict on each other as they try to process what’s happening to their families; a redoubtable Georgina Parry and formidable Jesse Beams (Isobel MacKinnon) discombobulating the constabulary by having the temerity to stand up to them …A loophole in the draconian laws lets women, dubbed the Scarlet Runners, run warning messages up the picket line when more strike-breakers and their ruthless union-bashing protectors are heading their way. Hence the title: Scarlet & Gold.

A loophole in the draconian laws lets women, dubbed the Scarlet Runners, run warning messages up the picket line when more strike-breakers and their ruthless union-bashing protectors are heading their way. Hence the title: Scarlet & Gold.

Director Kate JasonSmith ensures the heart of the story is exposed while interweaving its contrasting threads with dexterity. Each actor claims their role or roles with contagious conviction.

Emily Regtien takes us with her all the way, as the indomitable spirit Katherine Beech never knew she had risen within her to demand safety, justice, and a fair go for those whose labor makes the rich richer.

Lorae Parry’s privileged-but-compassionate Jane Ashton and increasingly stressed Grace O’Connor are two very different yet entirely convincing people. Todd Rippon segues with alacrity between his cultured capitalist Charles Ashton and union leader Bill Parry.With imperceptible skill, Carmel McGlone draws us into the internal dilemmas of Annie Burgess, in contrast to the overt strength of Georgina Parry. Similarly, Isobel MacKinnon commands our empathy with her life-loving and loyal-to-the-cause Emma Beech while her cameo as the spirited Jesse Beams causes us chaps in the audience to wince in automatic empathy with a Constable (who nevertheless deserves it).

With imperceptible skill, Carmel McGlone draws us into the internal dilemmas of Annie Burgess, in contrast to the overt strength of Georgina Parry. Similarly, Isobel MacKinnon commands our empathy with her life-loving and loyal-to-the-cause Emma Beech while her cameo as the spirited Jesse Beams causes us chaps in the audience to wince in automatic empathy with a Constable (who nevertheless deserves it).

James Gordon’s conflicted Thomas O’Connor differs from his moderate police Inspector Wright, whose honest appraisal of the strike action is over-ridden by the heavy-handed Commissioner Cullen (Cary Stackhouse). Jon Pheloung’s multiple roles include the aforementioned pragmatic Butcher and the doomed Fred Evans, both played with a compelling truth.

This solid core of experienced actors is backed up by newcomers (graduating students of Whitireia and the two child actors) who doubtless benefit greatly from being in their company.

While the subject matter of Scarlet & Gold invites comparison with the political plays of Mervyn Thompson and Dean Parker, playwright Parry’s dramaturgical choices lean more towards Renée’s relatively naturalistic trilogy of Kiwi classics: Jeannie Once, Wednesday To Come and Pass It On. Some conventions of the epic theatre are employed to reveal the story but the extremities of agitprop and direct-to-the-audience song-and-dance are avoided in favor of a style that draws us into a complex weave of real lives intersecting in a way that commands our empathy and encourages us to review our socio-political consciousness. We are, however, cast (in our seats) as union members and the public when speeches are made.

The singing and dancing comes naturally to this working class community and adds even greater value to a strong script and lively production with splendid design elements. The romance of such songs as ‘By The Light of the Silvery Moon’, ‘Let Me Call You Sweetheart’ and ‘In The Shade of the Old Apple Tree’ contrast wonderfully with ‘Ain’t We Got Fun’ and the stirring ‘Solidarity Forever,’ ‘Bandiera Rossa’ (the Italian ‘Red Flag’) and ‘Bread and Roses.’

Scarlet & Gold is as timely, relevant, engaging, entertaining and thought-provoking as one would hope any play to be. I am bewildered that the Circa Council turned it down for a TACT-funded mainstage production, especially given the core creative team’s proven success with such shows as Destination Beehive. Had it played in Circa One earlier this year, I have no doubt it would have featured largely in the Wellington Theatre Awards, thus increasing Circa’s profile in that event.

But maybe the struggle they had to raise basic funding and fit the 13-strong cast into tiny Circa Two helped align them to the play’s themes. Whatever the cause, this production is a ‘must see’ and the intimacy imposed by the venue is a plus for the audience if not for the potential economic return. I urge all inclined to book now as I predict the Full House sign will get a good airing over the next four weeks.

– – – – – – – – – – – – – – –
*Helen Kelly was a tireless advocate for the families of the coal miners killed in the Pike River Disaster (2010) and their fight for justice continues against the faceless might of capital. Coal mining also returned to public consciousness with the 1984-85 strike in Thatcher’s Britain, protesting her government’s colliery closures, then surfaced again as the context for Billy Elliot the film (2000) then the musical (2004), still playing on the West End. And the Auckland Theatre Company’s production, chosen to open their flash new theatre, is currently on in Auckland. 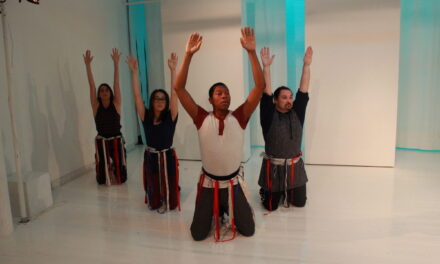