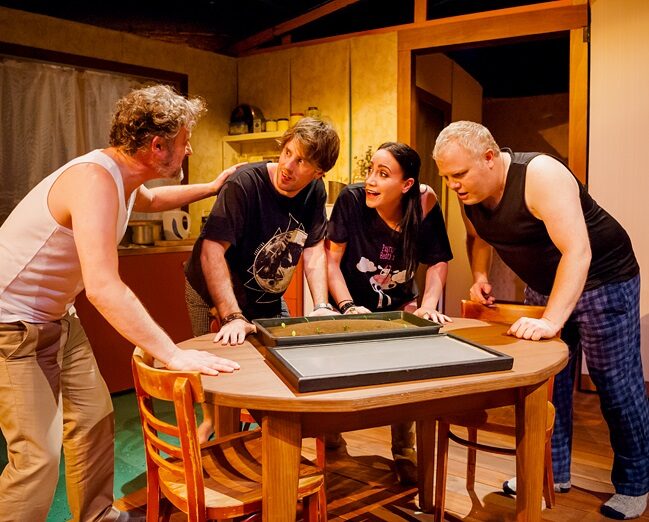 When Anthony McCarten’s Weed premiered at the old Harris Street Circa theatre in New Zealand in 1990 (also directed by Ross Jolly), you’d have had to be living under a rock not to know how so-called ‘free market’ imperatives had affected farmers and their rural communities. Most urban theatre-goers would have applauded the withdrawal of subsidies from a sector they saw as unduly privileged. So the focus was not so much on the plight of the farmers as the entertainment potential inherent in their need to diversify – in this case, by growing marijuana.

Of Michael Haigh’s Henry Donovan and Grant Tilly’s Jack Riorden, The Evening Post’s Laurie Atkinson wrote: “As a couple of greenhorns in the criminal underworld … they bumble their way into our affections in much the same way as Alec Guinness and Stanley Holloway did in The Lavender Hill Mob.” The production was hugely successful, going to tour and enjoying a return season at Circa.

Revisited 27 years later, Weed plays as an astute critique of neo-liberal economics. The focus is very much on how the politics of self-interest corrode human relationships in a competitive market where the contours of the ‘playing field’ are invisible to rookie players, and where the supply v demand equation is reported by hearsay. And because the inherent drama digs deeper in this production, the comedy works even better.

We find ourselves to be delegates at a ‘Towards the Future’ farmers’ conference where Henry Donovan, whose sheep farm is in hill country “way up north”, is trying to respond to a lecture on ‘macro-economics’ by recounting a recent visit to his lawyer. It is an astutely-written prolog, well seeded with thematic and story elements, and the deep-felt exemplary timing of Gavin Rutherford’s delivery proves the theory that truth + pain = comedy.

While Henry (whose wife has left him) is lost and bewildered, his neighbor Jack Riordan – sharply realized by Andrew Foster – claims to be up with the new way of thinking, and he’s the one who suggests how they could diversify. Indeed he is already ‘turned on’ to the scene, thanks to a nephew in the know and grow. It’s Jack who masterminds their plan, calculates the forward projections and declares, “There’s no room in any of this for greed, Henry.” Yeah right.

Simon Leary’s Walkman-wearing Hugh (the nephew) is entirely convincing as a hopelessly unfocused student, having a crack at Administration in his sixth year at university. “If bullshit were bitumen,” his Uncle Jack tells him, “you’d be the road to Auckland.” Yes well … it takes one to know one?

Add to this mix a free-spirited artist called Terry, with whom Henry struck up a friendship in a café when escaping from the conference, and the stage is set for altered states of being all round. Bronwyn Turei commits wholeheartedly to Terry’s hyper delight in all things rural while totally nailing insightful moments of truth – again to great comic effect. 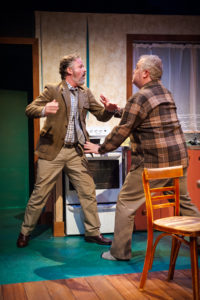 The John Hodgkins-designed set, with a folding wall that takes us from Henry’s sparse kitchen to Jack’s more classy ‘den’, flanked by the corroding detritus of decades of farming, is an absorbing work of realist art – a quality emphasized in the transitions by Lisa Maule’s lighting design. Sheila Horton’s costumes are also eloquent in articulating the background and status of each character as the scenes progress.

Attention to detail is not as apparent in some aspects of the production, however. While I’m happy to accept the subjective reality of a green glow emanating from the just-sprouting seedling tray, I am distracted by the lack of credibility at other moments. That’s never 120 shoots, for example. When you slug a mouthful of sour milk, spitting it out is not enough; multiple rinses must follow. And when Jack is bragging about the efficacy of his possum traps while Henry hobbles about like a wounded stag, how come Jack doesn’t jump to a conclusion, albeit wrong, given he can’t see why Henry is limping? Rather than being a scripting issue, I think the latter arises because of the way the stage business is directed.

There are some good visual gags and a surprisingly gripping moment involving an actual pool shot, that will doubtless play out differently every night. When Henry physically expresses his upset state, is the beautifully-timed visual ‘punctuation mark’, involving one of Terry’s art works, serendipitous or contrived? Either way, it gets a huge laugh on opening night.

The most rewarding aspect of Weed, for me, is the way it reveals the toxic truths inherent in the neoliberal economic model. “It’s a comedy, no more no less; its duty was, and I hope still is, to entertain!” writes Anthony McCarten in a program note. Yes, it certainly does entertain, with value-added insight and substance that marks a critical moment in our history we need to re-evaluate, not least in this election year.