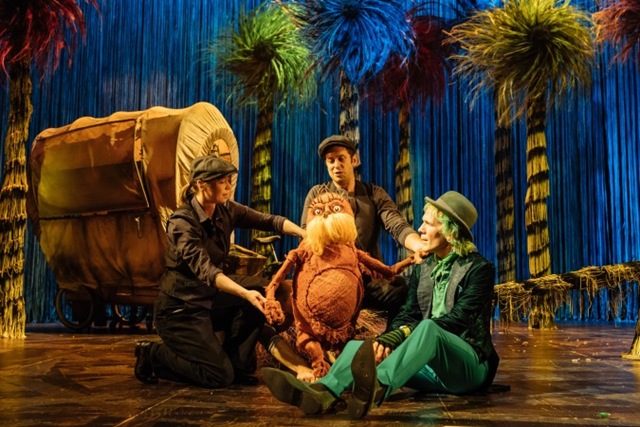 The story by Theodor Seuss Geisel (Dr. Seuss) that has made its way through various forms of animated cartoon films, is now playing at the Royal Alex in Toronto, after an opening performance in October 2017 in London.

Yes indeed!! We have all been watching the National Theatre Live bringing performances at the Old Vic and the New Vic, into Canada via satellite. This time, the David Mirvish production of The Lorax brings a whole British cast and creative team from the Old Vic into one of its own theatres in Toronto for a perfectly executed and utterly polished performance of The Lorax live without the camera! The experience is so completely exciting it had the little ones and the older ones glued to their seats for almost two hours and 15 minutes including the intermission.

With 16 actors/singers dancers, numerous understudies and musicians, this huge company is putting on a show for both young and less young, an exceptional feat that has transformed that chubby little beaver-like orange creature with the humongous voice and thick whiskers, into one of the vital figures of Anglophone popular culture! Writers, choreographers, singers, musicians, and all manner of talented individuals under the direction of Max Webster, the design of Rob Howell, the choreography of Drew McOnie and the music/lyrics of Charlie Fink have set the show into several levels of performance which make this appeal to all the generations in that unmistakably playful and creatively twisted language of Theodor Seuss Geisel.

Going back to the original book on which the first animated cartoon film scenario was based, the show opens in the murky space of a “Street of the Lifted Lorax” where an empty pedestal arises out of the smogular smog. A group of inquisitive, children sneak onto the property of someone called the Once-ler, a strange old fellow hiding at the top of the rotten wooden structure that reminds one of the remnants of 9/11 in New York. They want to find out what a Lorax is, and where he went, and what happened here? Two eyes burning in the dark agree to reveal all their secrets as the children settle down for a fascinating two hours of a most unbelievable story and from that moment on, we are hooked.

The set explodes into the past, the cockney brood and family of the young Once-ler leap on stage headed by a figure that recalls Liza Doolittle’s father, the Dad sung by a solid and spectacular Joe Alessi while the young, too poetic Once-ler, played by a most versatile Simon Paisley Day, is tossed out of the family and sent on his way to find greatness and a way to make money. From then on extraordinary, multicolored creatures fly past, pop up, climb, swing by, bury themselves and create an atmosphere of nonstop magic as they all harness their special energies. The special trees grow in brightly colored masses. This world is subjected to magic lighting that brings to life the golden Swomee Swans, the bouncing Barbaloo bears, and the humming fish.

Out of this natural paradise comes “the tuffs,” the material that will allow the son to create his “thneeds,” the objects that don’t serve any purpose but that soon, everyone will need and Simon Paisley Day raps out a solo explaining the multiple uses of thneeds knitted from the tufts of the truffula trees. Neighbors and family in a frenzy of collective excitement gather around the Once-ler, a Steve Jobs in the making, and let themselves be hypnotized by this project which will better their lives, change the world, and ultimately destroy nature.

The stage inventions grow ferocious as tree cutting machines inspired by images of the Terminator gobble up the land, and modern structures spring up like weeds. The Once-ler becomes a corporate fanatic, a consummate liar, and an astute businessman who will resonate with the adults, There is even a moment when a trio of the most perfectly synchronized lawyers: Von Goo, McGee, and McCann turn up to find the loopholes in Once-lers contract with Lorax so the man can ignore their agreement and continue chopping trees. It resounds with the forestry conflicts on the Canadian west coast and becomes very real for a Canadian audience.

That moment became the most powerful musical moment in the show as the lawyers are suddenly transformed into a sparkling trio headed by a certain Wendy May Brown who is almost worth the price of the ticket. She has sung Porgy And Bess, she has acted in The Color Purple, and many, many more. She has an operatic voice that works on multiple musical levels and could have taken over the show.

The appearance of Michael Ajao who plays many roles, left his mark during intermission when he began improvising apparently, a rap monologue, to amuse the audience with his spoken word performance, his sense of humor and great corporeal control. This show was just bulging with talent and the conception of the play opened the artistic space to give all forms of talent its outlet. It was all so refreshing!

Even the puppetry was imposing as the three puppeteers who brought the chubby Lorax to life by operating his voice, and movements in a Bunraku style of manipulation (note voices of Owain Gwynn and David Ricardo-Pearce).

One might wonder if such an overflowing of staging wouldn’t confuse young people or if the strange language games of Dr. Seuss might confuse the message but such was not the case. Because even if a four year could not follow Seuss’ verbal tricks, the ecological message about unbridled capitalism, and the destruction of nature, was clear as a bell. “I speak for the trees,” roared Lorax. He projects anger, sadness, and deep emotion. We could almost feel his eyes fill with tears as we saw those tree stumps rotting away under the nasty gaze of the greedy Once-ler. The staging showed it all even if the language was not always easy for the young ones. That was the great art of the show. It works at all levels.

This is an astounding artistic success that also gives you hope for the future. Do yourself a favor, try to see it!

The Lorax plays at the Royal Alexandra Theatre until January 21, 2017.

Also posted on the site www.scenechanges.com 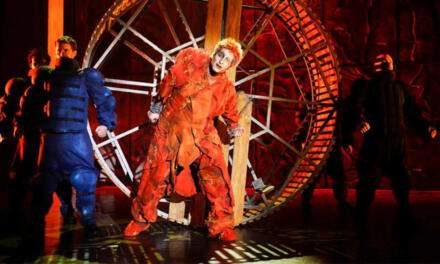