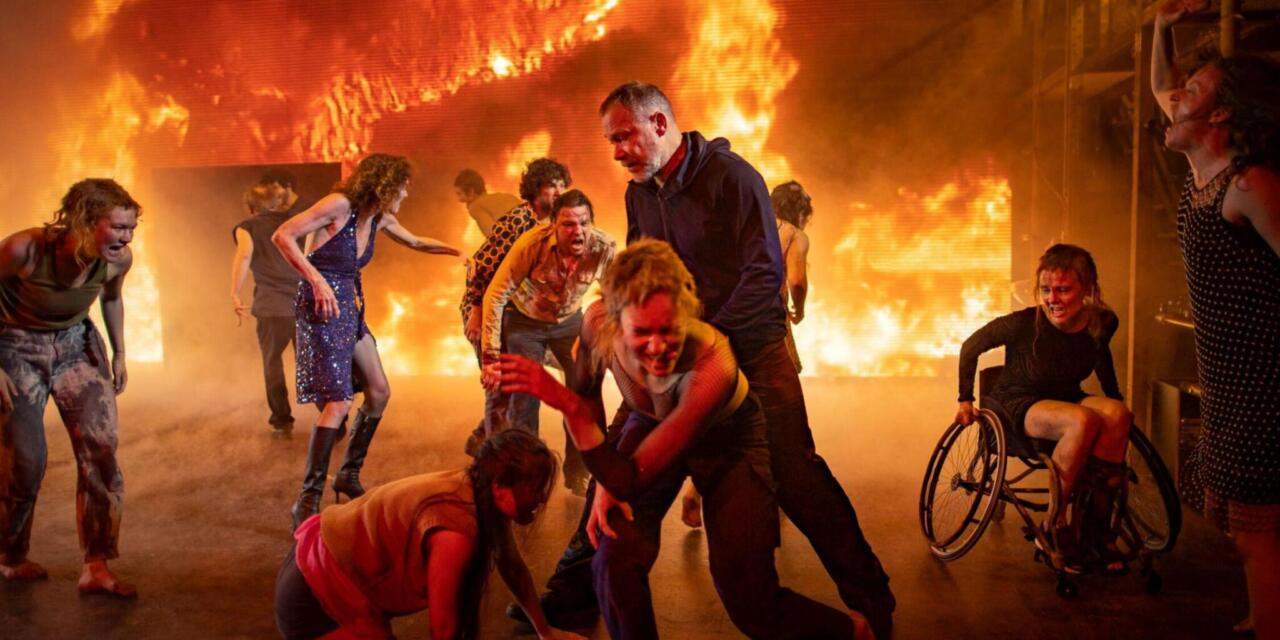 Ivo van Hove’s production of Age of Rage is sourced from six plays by Euripides and one by Aeschylus, chronicling the cycle of violence and revenge befallen on the house of Atreus – starting with Tantalus and extending via Agamemnon and Clytemnestra to Orestes and Electra. This particular material has become very familiar in recent theatre history. At the turn of the 21st century Katie Mitchell’s iconic production at the National Theatre London referenced the wars in the Balkans. War – specifically the one in Iraq – was also the subject of Charles Mee’s tetralogy Imperial Dreams (2006) consisting of Iphigenia 2.0, Trojan Women, Orestes 2.0 and Agamemnon  2.0. More recently, in 2015, there were no less than three different productions of Aeschylus’ Oresteia suddenly being staged in England: Robert Icke’s at the Almeida, Rory Mullarkey’s at the Globe and Blanche McIntyre’s production of the Ted Hughes adaptation at Manchester Home. That was a time before Brexit, a quiet before the storm when the Greek classics could serve as pretext for exploring civilizational values such as family and law (as was the case with Robert Icke’s version on which, full disclosure, I worked as a dramaturg).

According to Van Hove, Age of Rage ‘exposes the Achilles’ heel of our society today – the fissures of contemporary democracy’, and as such it implicitly explores the power struggles manifesting as global racially motivated public unrest and the #metoo movement. But how does this work on the stage? This analysis adds to my long term dramaturgical interest in van Hove’s previous work – see the analyses of Hedda Gabler (2017), Kings of War (2016), Antigone (2015), A View from the Bridge (2014), and Scenes form a Marriage (2013).

The theatrical saga of nearly four hours Age of Rage opens as a heavy metal gig. The main hint that this is a theatre show rather than a music event is provided courtesy of large smokey meat barbecues set ablaze with roaring fires and emitting the kind of smell that arouses concern rather than salivary gland activity. This is especially so given the accompanying surtitles which recount the story of Tantalus, the progenitor of the house of Atreus, serving the meat of his own children to the gods, and thus setting off the curse of violence and revenge.

Unlike the British-grown brand of gig theatre where the gig and the theatre performance are often fully organically integrated at the service of storytelling, Ivo Van Hove’s production keeps the performance segments distinct and seemingly compartmentalized according to the 20th-century traditions of professionalization: the band Blindman do their thing (apparently known as ‘doom metal’), the dancing chorus choreographed by Wim Vandekeybus do the dance numbers (though the choreography sometimes involves the actors too), while the actors are at the forefront of the storytelling itself. This division of labor feels a bit disappointing at times raising questions around the dramaturgical purpose of the music in this piece. By contrast, it brings to mind Christopher Rüping’s not dissimilar 10-hour long undertaking at Munich Kammerspiele Dionysus Stadt (2018) whereby the gig theatre element consisting of a dramaturgically and visually centralised drum kit sequence, framed by the din of breaking ceramics, serves as a depiction of the Trojan war. On the other hand, both Rüping’s and van Hove’s versions, possibly due to sheer length, foreground a more telescopic and dialectical lens on technicity and power, respectively.

Van Hove’s version is clearly divided in two halves. In the first half we witness reverberations of various patterns of apparently legitimate violence against women such as Iphigenia’s sacrifice in the interest of Agamemnon’s political ambitions and the dramaturgically symmetrical execution of the Trojan princess Polyxene in the hands of the Greeks (both roles are played by the same actor, Ilke Paddenburg, and she also plays the corpse of Polydorus, Hecuba and Priam’s youngest child). Queen Hecuba (Janni Goslinga) is laconically portrayed as a wheel-chair user, and Cassandra (Maria Kraakman) as an ancient Joan of Arc, energised by dreams of revenge only to meet a tragic end herself.

The second half is atmospherically, ideologically and aesthetically quite different in tone. Here the power balance has been inverted with the character of Electra now in command of the stage action, however her own plans of revenge, although initially fruitful to some extant, unfold on a progressively sticky terrain. Where the fire of male ambition reigns supreme in the first half and women only serve to add wind to their sails (quite literally in the case of Iphigenia’s sacrifice), the second half is only drenched in unrelenting rain. Soaking the dry earth that had been revealed at the end of the first half, the water turns the stage into a muddy pool which slows down and pulls back all ambitions of progress. The cycle of revenge effectively threatens to turn humans back into animals and the only way dramaturg/adaptor Koen Tachelet and director Ivo Van Hove can resolve this chain reaction is by resorting to the good old classical device of ‘deus ex machina’ itself. Here Apollo (Achraf Koutet) eventually steps in to arbitrate and put an end to things, before Blindman take to the stage again for a doom metal finale.

As is customary in Ivo Van Hove’s productions the underlying concept of the production only becomes clearly apparent at the end of the performance when reflective distance can finally be obtained. Here it also becomes clear what dramaturgical function Blindman’s music serves in this particular constellation: in a Western world where violence/rage/power is perceived as anthropologically elemental, it makes sense to frame the action through systematic referencing of the elements (fire, air, earth, water, metal). Hence the age of rage is not merely a reflection of our present moment but of the civilisation as a whole, but do we have the means to break the cycle without the divine intervention?