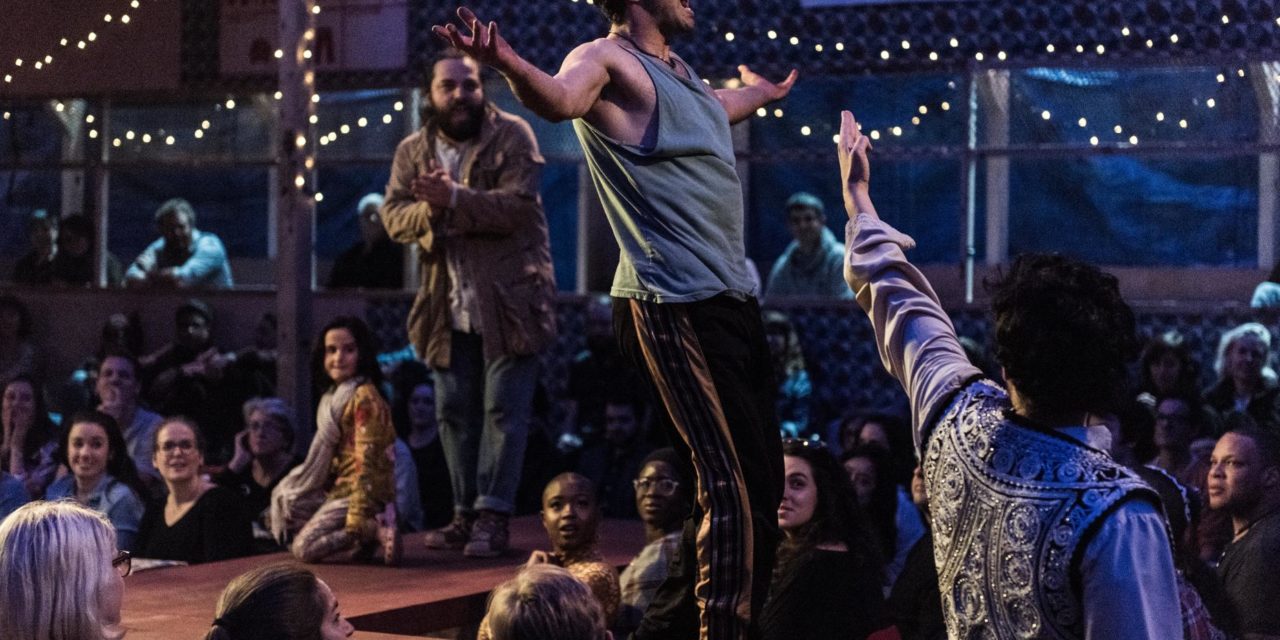 “Immersive theater” is a gimmicky term that can be just an indiscriminate pitch nowadays for any show where the audience has to move, or enter through a different door, or just sit in a specially constructed environment. The Jungle at St. Ann’s Warehouse is no environmental lark or gimmicky funhouse. It’s a gut-punch of a play about a notorious, sprawling Calais refugee camp that the French government bulldozed in 2016 and a nearly three-hour crash-course in empathy whose fierce immersion experience feels urgent, important, and utterly necessary to its artistic purpose.

Anomalously enough, this play filled with panic and outrage feels like an antidote to outrage-exhaustion. It dumps you all at once into the lives of frantic, desperate, no-status people akin to panhandlers you might easily tune out, and then grips you with a flow of intimate detail and canny narration about them that peels away your emotional calluses.

At intermission the night I attended, a push notification came through on my phone from the New York Times reporting that the Supreme Court had thwarted Trump’s effort to subvert America’s asylum law. Our government couldn’t summarily deny asylum anymore to those who crossed the Mexican border illegally. We actually had to live up to our compassionate PR.

It was an eerie moment as if Washington had suddenly supplied program notes for The Jungle, which happens to be about people in a nearly identical circumstance. The migrant characters in it, from seven different far-flung countries, are desperate to get through the Chunnel to the UK, whose law treats asylum-seekers much more generously and humanely than France’s. Yet in Calais, gathered in a roadside, town-size camp nicknamed The Jungle, they’re stymied by elaborate security measures put in place—mostly by the UK—to prevent people like them from ever reaching the other shore and benefiting from the law.

Co-directed by Stephen Daldry and Justin Martin, The Jungle is a co-production of The Young Vic and The National Theatre in London and Good Chance Theatre, a group established by Joe Murphy and Joe Robertson in an 11-meter geodesic dome in the Calais Jungle camp in 2015. These young British playwrights lived for 7 months there and established the dome as a center for creative expression in art, dance, and music as well as theater.

The dome has been transported intact to St. Ann’s Warehouse and the audience can inspect its densely graffitied walls hung with hundreds of soul-bruising child’s drawings as they walk through to the playing area. A concession stand operates there, and a bearded guy plays plaintive melodies on a triple-flute during pre-show. There’s also a warren of makeshift refugee living quarters and a recreation of an Afghan restaurant that once thrived in the camp.

The playing hall is a large rectangle where long restaurant tables serve as acting platforms and mulch-covered aisles divide the seating into country-specific areas: Egypt, Syria, Sudan, Eritrea, Afghanistan, Palestine. (I sat in Palestine.) The walls are ad hoc plywood-and-chicken-wire constructions like those in every ramshackle place you’ve ever seen. TVs at the corners silently flicker with Bollywood dance numbers, terrorism news, and occasionally footage of police actions in the real Jungle.

The play’s storytelling is jagged, agitated, and untidy—exactly right for a drama of lives on the edge. You have to work a little harder to understand. The action opens on a flurry of announcements by some Brits in dirty down vests: a French court has authorized the police to clear half the camp, an area that includes the beloved restaurant where everyone gathers. The reaction is a panicked flurry by those who speak accented English and a babel of other languages.

The 14 migrants in the cast are mostly men: guys in skullcaps and gym pants, keffiyehs and camo, the women in headscarves and sweatshirts, an abandoned little girl. They jostle us in the mulchy aisles, or bonk our drinks beside the platform-tables, then apologize graciously. There isn’t enough space for anyone, you soon understand, even this small theatrical sample group, and it’s about to get smaller. Soon, we know, it will be eliminated.

In this way, the play starts with the awful end. “I know a little bit about telling stories. Always start at the end,” says gentle and worldly-wise Safi (Ammar Haj Ahmad), the Syrian English-lit student who serves as our on-again, off-again narrator. Then we backtrack to individual stories that make us care even more about the catastrophe yet to come.

The pith of the migrant tales is in their enactment. The cast is uniformly extraordinary, making each highlighted character so unforgettably particular that his fate breaks your heart. John Pfumojena plays Okot, for instance, a 17-year-old Sudanese who fled his village because otherwise his mother would be tortured by Janjaweed trying to snatch the local young men for their militia. Pfumojena is so concentrated in his stony determination that his statuesque presence reads as an energy cell powering the scenes he’s in.

Ben Turner plays Salar, the Afghan restauranteur who’s such an angry hothead to begin with you recoil from him. He slowly wins our affection with unexpected flexibility in the camp’s pivotal resistance debate and also by his care for orphaned 15-year-old Norullah (Mohammad Amiri). Amiri, for his part, also surprises by transforming Norullah’s racist contempt for Okat believably into fateful friendship. The complex cross-cultural bigotries in the camp are in no way papered over.

Nor are the equally complex Western politics of immigration. The playwright “Joes” have made the very smart choice of subjecting the do-gooding British volunteer organizers in the camp to the same skepticism as everyone else. Paula (Jo McInnes), a woman in her 50s bent on helping children, Beth (Rachel Redford) and Sam (Alex Lawther), 18-year-olds just out of secondary school, all swoop into the camp on the wave of international sympathy for refugees that came with the viral internet pictures of 3-year-old Alan Kurdi lying dead on a Turkish beach in 2015. The self-congratulatory bleeding hearts of these naïfs are laid witheringly bare to everyone.

These privileged Brits prove capable of some self-awareness, though. They launch into a discussion about “virtue signaling,” the cynical practice prevalent in their country and ours of announcing help for the needy that isn’t real or effectual, and this is the closest The Jungle comes to an explicit political message. Thankfully, it’s not pressed to too sharp a point. I found myself grateful that although these well-meaning people do end up actually helping out—with schooling, temporary housing, translation, legal aid, and more—they never acquire even provisional haloes.

All the white people in the play remain recognizably flawed, and that’s a crucial strength. Such a ripped-from-the-news drama, bringing stories of the downtrodden into first-world cultural palaces like The Young Vic and St. Ann’s, can easily become a sort of self-serving virtue-signal itself if it can’t make its privileged audiences somehow recognize their own secret dodges, excuses and blind spots in the vexed arena it dramatizes. Only then can it possibly hope to transform whatever empathy it generates into meaningful action.

This article appeared in Jonathan Kalb on December 23, 2018, and has been reposted with permission.

A Matter Of Grave Concern: The Oldest Theatre Group in Delhi Stages “Kafan” and “Kafan Chor”