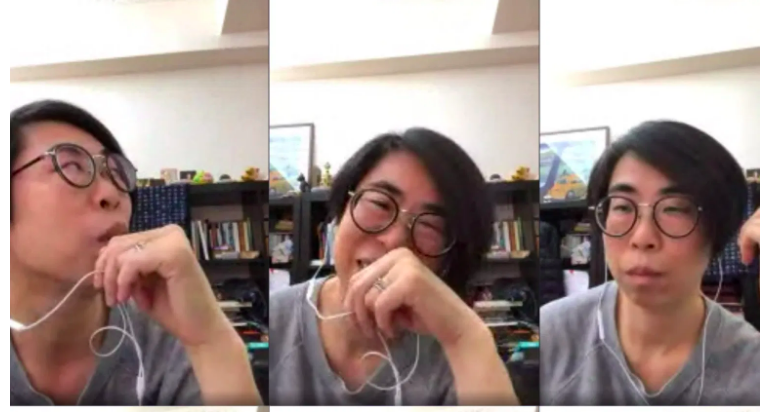 It’s hard to categorize Anson Mak Hoi-shan. In a video call in early March, the only time the fifty-something artist, filmmaker, phonographer, musician and professor seems at a loss for words is when she’s asked to describe what she does.

“That’s hard to say. I was a film student as an undergraduate,” she says, piecing together some sort of concise, career soundbite. “When I graduated there was no Arts Development Council at the time”—the ADC was founded in 1995—“so it was hard to get funding. So I started working on video shorts in the early 1990s. Film was very expensive for an indie filmmaker, so I couldn’t really say I was a filmmaker.”

She pauses for a minute, considering the best way to describe her body of work, which is all over the artistic map.

“When I make films people call me a director. When I do visual arts work in exhibition spaces they call me an artist. I don’t care. I just do what I do. I guess I would say I’m a moving image and sound artist.”

Attempting to slap a label on Mak and her work is as futile as it is misguided. She’s something of an artistic polymath, with a keen interest in experimental ethnography, and someone who casually references Albert Einstein in her work – and is skilled enough for it to make sense. After the native Hongkonger graduated from the film and television program at Hong Kong Baptist University—where she is currently an associate professor at its Academy of Visual Arts—she earned a master’s degree in film and cultural studies and finally a doctorate for her research on “community archiving and locative web-based projects with sound, photography and moving image content,” as she describes it.

Sound became a crucial element in Mak’s films almost immediately, and Mak was also a member of indie-pop band AMK in the early 1990s. Starting with her first publicly screened experimental short in 1991, Two Or Three Things I Know About Them, Mak’s fascination with how sound—or lack of it—had the power to alter our perceptions. She cites French filmmaker Chris Marker, best known for La Jetée (1962), the sci-fi short constructed entirely from photographs, and the essay on our flawed collective memory, Sans Soleil (1983), as among her biggest influences, for “the way he experimented with cinematic language, and mixed experimental structure into documentary essays.”

Mak took an interest in phonography, the art of field recording and collecting sounds from different places for soundscape composition, and her early work in Hi8, VHS, Beta, DV and Super 8 formats often explored the intersection of sound texture with images. Invisible Bodies (And So The Cities) from 2001, a video diary about sickness, is notable for its ambient soundscape from four cities, and Who’s Afraid Of Ghosts!?, which won a prize for sound at the Cambridge Super 8 Film Festival in 2009, juxtaposed sound and culture (the Ghost Festival) to explore the then-looming redevelopment of Kwun Tong and its impact on the old community.

Like many of Hong Kong’s prominent new wave directors, such as Patrick Tam and Ann Hui, Mak eventually found herself overseas. She was admitted to the California Institute of the Arts in 2004 but quickly realized that Los Angeles was not a city for her. “You can’t go anyplace without a car,” she says. And despite three scholarships, it was too pricey for a self-funded student. One thing her stint in LA did accomplish was to set her on her current course. “It got me thinking more and more about how I relate myself to Hong Kong, and Hong Kong as home,” she says. Though she admits she flirted with the idea of feature filming, Marker-style essays were the natural language for Mak’s film expression given her simultaneous interest in exploring social and psychological issues.

By 2006 she was back in Hong Kong and ready to make her first feature-length doc. One Way Street On A Turntable (2007) was a visual essay and portrait of the city, using archival images and purpose-recorded sound, exploring the concept of home from two women’s perspectives, and by drawing their histories from spatial memory. On the Edge Of A Floating City, We Sing (2012) chronicled a handful of independent musicians’ social and political connections to the city, with a focus on urban spatial storytelling. Both films feature people and places rooted in community and history, weaving poetic, contemplative tapestries that imbue unassuming spaces with meaning.

Web projects From the Factories (2015) and A Map Of Our Own: Kwun Tong Culture and Histories (2009, with a complementary installation) furthered those themes, which along with sound experimentation paved the way for her latest. Fittingly called a “moving image work,” Fear(less) and Dear made its debut at the coronavirus edition of the Busan International Film Festival last October. It’s a film less concerned with the politics of 2019 as with the resulting collective trauma of expressing those politics, and how the community processes it.

The film’s origins date to 2018. “Even before 2019 the city was in a very strange moment,” says Mak. The Umbrella Movement of 2014, skyrocketing housing prices and an increasingly limited education system were making average people anxious. “We were quite lost and unsure what to do, or what we wanted to do. It was almost like we were frozen and had no idea how to move forward. At the time I was curious about the notion of fear,” she says. More recently, the back-to-back disruptors of the protests and the pandemic have marked a period of lengthy struggle for Hong Kong, highlighting another motif that emerged in her work: our internal emotions as a space. The stress of the last two years has led to a lot of unfocused fear among Hongkongers, and as an artist, Mak naturally gravitated to others whose lives and careers were about expression. She also wanted to include parents, people for whom fear could be felt on someone else’s behalf. “It’s not necessarily negative, though. When we feel fear it’s our inner self reminding us to be aware of something that’s important.”

Fear(less) and Dear by no means follows the accepted documentary model increasingly peddled by Netflix: presenting an issue, investigating it, detailing the outcome, peppering in talking heads. As Marker did, Mak wilfully tinkers with formal structure as she mixes five artistic disciplines, including film, together. Sound is key; she bookends the film with the sound of water lapping the side of a boat. “Most docs don’t care [about sound]. As long as the voice is captured they’re happy,” she says with a laugh. “I’ve always been interested in the layers of sound and the different associations a viewer can draw from that. The opening minute, in the dark, in the middle of the sea is totally silent,” she notes of the segment that demonstrates her notion of the interconnectedness of sound and place.

Mak and her crew finished production in May 2020, before the National Security Law was implemented. Given the law’s sweeping scope, she asked herself if a change in approach was needed. She decided it was not. “Ultimately the most important [elements] of the film was internal psychologies and the innermost feelings of my subjects,” she says.

Fear(less) dives into the psyche of three Hong Kong artists, asking them to define their fear, and interrogate it as it impacts their feelings as parents and their creative expression. Mak’s subject includes performance artist-turned-district councilor Clara Cheung, author and lecturer Cheung Yuen-man, and cartoonist Justin Wong. Mak chose them simply because each was an acquaintance, and each trusted her with their most personal thoughts.

“Justin is very rational and analytical, but when he talks about his kids he’s very emotional,” says Mak. “I thought that would be an interesting thread to follow. When I spoke with Clara, she hadn’t decided to run for district council, but that became part of her story. She’s very bright, and very positive, so that’s another perspective in the larger context. With Yuen-man, I knew she struggled with her own emotions, so I knew she would best articulate how we deal with fear.”

What makes the film so compelling is its unconventional form. As Mak points out, Cheung and Wong’s work was easily visualized, but Cheung Yuen-man’s words were not – at least not without falling back on convention and printing text on the screen. In some of the Fear(less)’s most striking images, dancer Vinci Mok interprets Cheung’s recitation of her novella “Contraction,” which metaphorically merges childbirth with the airport protests, in a performance of Butoh, the post-war Japanese form noted for its diversity of motion, absurdity and taboo content, on the streets of Mong Kok.

“A lot was going on there at the time, and I think that Yuen-man reading the story, the music by Square Fruit, the soundscape from Mong Kok and the use of silence created a realistic and imaginative space,” says Mak. “I had to think about how sound could work on these various layers. All of these together make demands of the audience’s imagination.” It’s a film that requires a lot from viewers, but one that gives back with three empathetic, resonant, funny, sad, frustrated neighbors who vocalize what many of us cannot. Mak has also done something no one else has in the last two years: asked how we were feeling. That alone makes the film unique on the doc landscape.

Mak is continuing her examination of our psyches in her next project, by exploring how artists wrangle with complex emotions during an equally complex point in history. Sharing what we all do for personal therapy right now—cooking, fishing, listening to music really loudly, whatever—is important as Mak sees it, but the untitled project will probably be a combination of gallery exhibition and web-based content. “I’m not purely a filmmaker,” she says. “I have other possibilities for moving image work. Cinema is only one platform. My next project is probably not going to be a single channel format on cinema. That’s more flexible and can travel to other locations easier. I’ll always look for different possibilities for showing work.”

Fear(less) and Dear screened at Broadway Cinematheque March 23 to 28, 2021, with dates in April to be confirmed. Refer to cinema.com.hk for details and director Q&As.

This article was originally published by Zolima City Mag on March 25, 2021, and has been reposted with permission. To read the original article, click here.