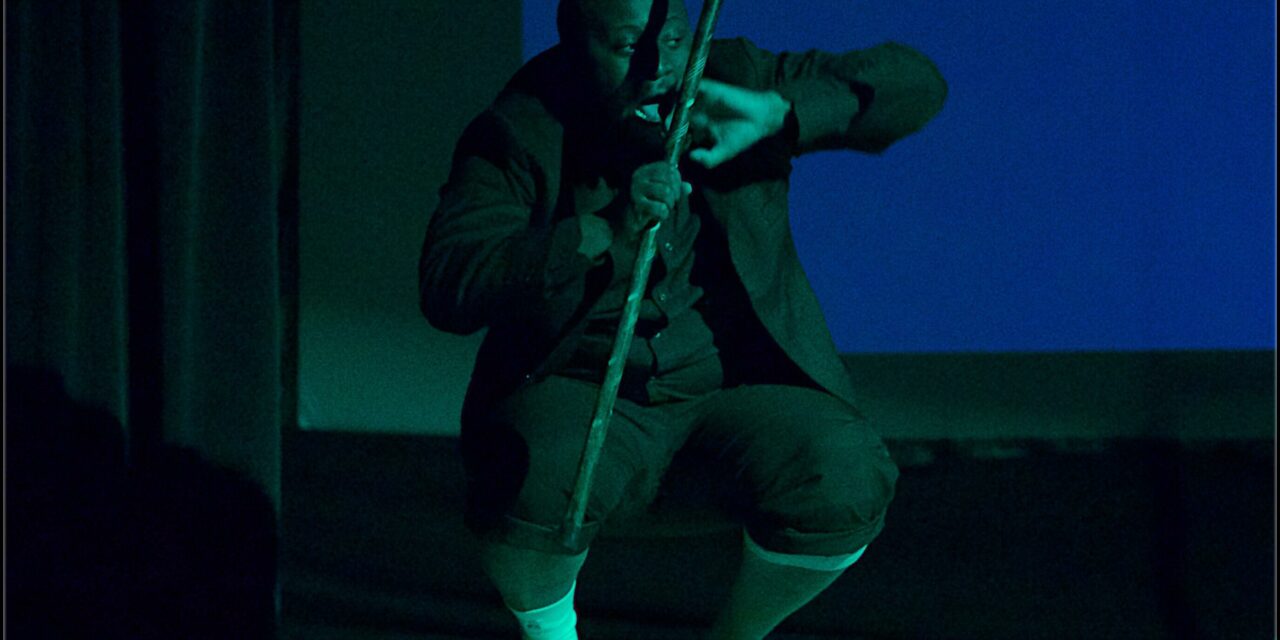 It’s natural to see apes living in the wild and climbing trees and other things. Unfathomable, however, is seeing one give a presentation at a conference. But this is the case in Tony Bonani Miyambo’s performance of Kafka’s Ape at the recently concluded National Arts Festival in Makhanda, South Africa.

An adaptation of Franz Kafka’s short story, A Report to an Academy, Kafka’s Ape is the brainchild of Phala Ookeditse Phala whose goal was to “to explore themes around otherness in a South African post-apartheid context.”  The play has taken on “more meaning over the years with shifting socio-political landscapes.” Miyambo shares in an impromptu online chat.

A solo performance, this powerful piece examines Identity in a post-apartheid community and questions who a South African is and what makes them one through Red Peter’s transformation from ape to human.

Red Peter is an ape that was captured and transported on a ship to Eastern Cape. There, he’s options are to either become an entertainer in a cage or go and live in a zoo. He chooses the former. To become an entertainer, the ape is taught the ways of humans – in other words, he learns to become more normal, more human, even smoking pipes like old men. Too normal in fact, that his supervisors are soon sent to mental asylums when they start thinking they have become the real apes. 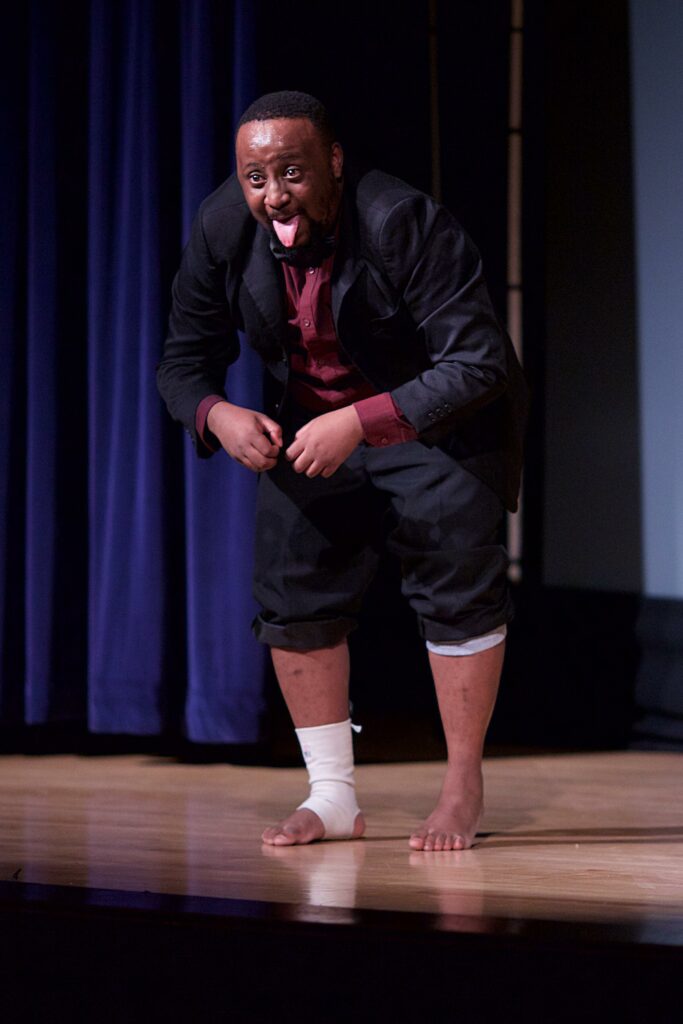 Now Red Peter is giving is a report on his development as an educated ape at the “Species of the World Conference.” And he is philosophical in his presentation! Although he’s become more human, this does not stop him from observing and critiquing human flaws.

We know not what other people really are by looking at their outward appearances, he points out in the presentation. This fallibility causes humans to judge each other only by their skin colors using offensive names like darkie or amakwerekwere (the locals, reference to foreign Africans ).

Education, or the accumulation of it, does not prevent humans from being blindsided or prejudiced, Red Peter laments.

“You gain much knowledge but see much less,” is his verdict.

Kafka’s Ape is ambitious, and it flourishes with Miyambo’s performance, who narrates and acts simultaneously, occasionally breaking the fourth wall by shaking an audience member’s hand or touching their hair and pretending to remove invisible fleas. His physicality and next to an accurate imitation of the primate all with the unsettling ape sounds is riveting.

When Red Peter begins climbing on the poster steel frame and agonizingly struggles to hang his walking stick on the pulpit or get some documents from the briefcase when he hobbles on to the stage at the beginning of the play, you know you are there with the ape! 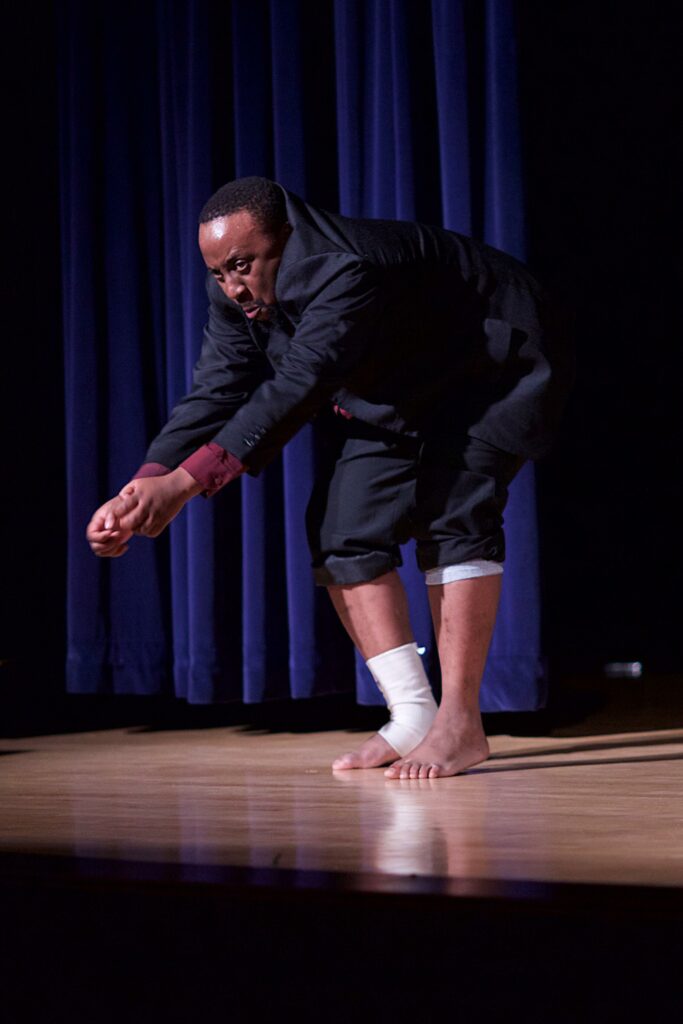 Directed by Phala Ookeditse Phala himself, the play has been performed in various locations across South Africa, the United States of America, Dubai, and Europe bagging praises from both critics and moved audiences, nominations and awards along the way. They won the Performance award at the recently concluded Prague Fringe of 2019, The Silver Ovation Award at the National Arts Festival and the Best Public Performance award at the HSS awards, a nomination for the 2016 Foreign Production at the Amsterdam Fringe and many more.

L.Sojini thinks of himself as the bad boy of African writing. He has previously written for GQ, Books LIVE  and the Business Day. His novel Emzana: Shack Recollections was published in 2011 by Pole, Pole, Press.  He’d rather be writing novels, reading and talking to interesting people. But because this doesn’t pay the bills, he’d rather hassle local and international celebrities for interviews he can turn into features for the local papers.  At least this keeps the hunger at bay.