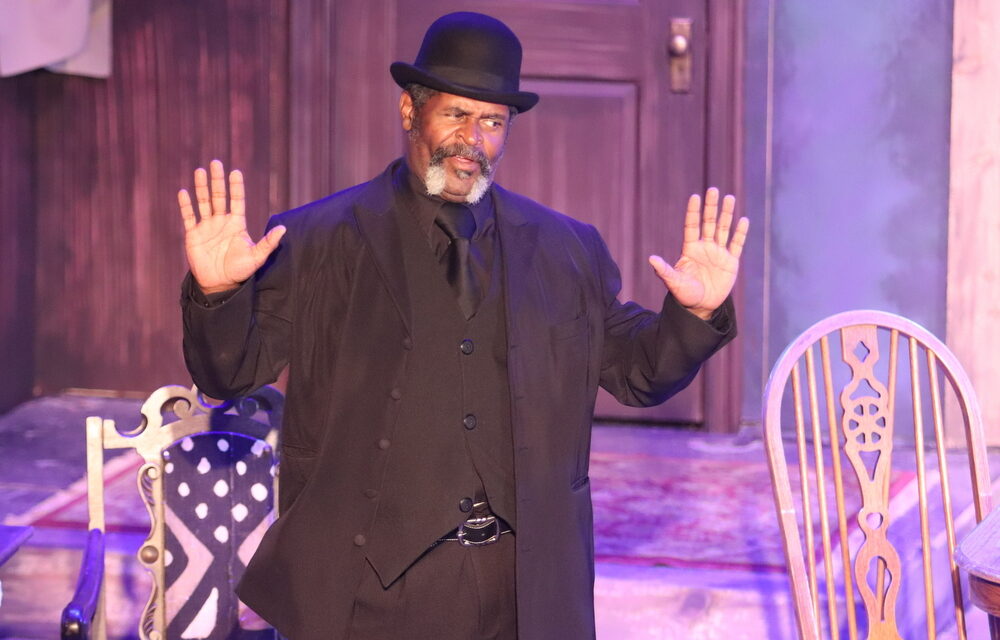 A couple of weeks ago The New Yorker featured an article by Kelefa Sanneh about the work of Dr. Ibram X. Kendi, the founder of the Antiracist Research & Policy Center at American University.  Sanneh describes how Kendi came to realize that his embrace of the notion of black self-reliance – “a doctrine that urged black people to overcome the legacy of racism by working hard and doing well” – was itself “shamefully racist, because it blamed black people for their own failures.” Kendi argues that, in fact, “the idea of black underachievement lends support for anti-black policies, which in turn help perpetuate [racist] conditions.”

I was thinking a lot about that article while watching the Pittsburgh Playwrights Theatre Company production of Gem of the Ocean, directed by Andrea Frye. Set in 1904, Gem of the Ocean begins the history traced in the ten plays that make up August Wilson’s “American Century Cycle,” telling the story of African-Americans who have migrated north during Reconstruction and find themselves confronted with new forms of racism and discrimination in Pittsburgh. The play’s villain, Caesar Wilks (played with canny charisma by Wali Jamal), is the local sheriff, who has assumed to himself the right and privilege to police black behavior in the Hill District and hold his community to the strictest standards of behavior and virtue, without regard for context or extenuating circumstances. When he gets whiff of one of his neighbors stepping over the bright line of the law, he shoots first and asks questions never.

One of the burning questions the play poses is: what causes a man like Caesar to antagonize and (frankly) betray his own community in such manner? An easy answer might see in Caesar a reboot of the plantation foreman in a new guise. Kendi, however, would likely see in him an “assimilationist,” a person who – like black sociologist W.E.B. Du Bois – believes that the black community’s path to assimilation and equality lies in virtuous comportment and strict adherence to the letter of the law. Kendi argues that this is itself a form of racism because it perpetuates the idea that there is something inherently wrong with people of color that must be “fixed” or “improved” in accordance with external – that is, white hegemonic – standards or expectations. As Kendi notes, however, the thing that is truly wrong is “racism, and the country’s failure to confront and defeat it.”

Jamal’s interpretation of the role opens the door to these thoughts – although Caesar could easily be played as a mustache-twirling melodramatic villain, Jamal brings conviction to his assertions of righteous law-abidance and also allows us to see how much of that conviction is due to internalized racism rather than a sycophantic desire to please the city’s white powers-that-be. Jamal’s interpretation of his role is but one of the many aspects of the play that make it feel particularly timely for our present moment. There is also its flight into magical realism, in which the shamanistic Aunt Ester (Chrystal Bates) sends Citizen Barlow (Jonathan Berry) on a hallucinatory trip to the City of Bones. That harrowing scene – in which the horrors of the Atlantic Passage are recreated for Citizen by the three former slaves Ester, Solly Two Kings (Kevin Brown), and Eli (Les Howard), along with Ester’s protegé Black Mary (Candace Walker) – connects the dots between the treatment of Africans in slavery and the disenfranchisement of African-Americans through the discriminatory legal, social, and economic framework of Reconstruction. It doesn’t take much for an audience member to do a little further dot-connecting to see how the play points forward to what Michelle Alexander has described as the “redesign” of the racial caste system in the form of the mass endangerment, incarceration, and brutalization of African-Americans at the hands of the contemporary criminal justice system.

Pittsburgh Playwrights Theatre has sited the play at 1839 Wylie Avenue, an empty lot now and also during Wilson’s lifetime; scenic designer Diane Melchitzky has engineered an impressive structure to serve as Aunt Ester’s “sanctuary” for her community, a place where troubled individuals come to have their souls washed. While the set doesn’t quite achieve the serendipitous magic (or acoustics) that August Wilson’s childhood backyard at 1727 Bedford Avenue brought to the company’s previous productions of Seven Guitars and King Hedley II – both of which are set in similar Hill District backyards and needed little else to create that spine-shivering sense of watching art mapped onto lived history – there is something otherworldly and enchanting in seeing Wilson’s fictional house, with its historically-rich characters and conflicts, conjured into existence on the very site he dreamed it. Pittsburgh – with its mills, rivers, bridges, and  specific neighborhoods and geography – is very much a character in the play, and the view past Aunt Ester’s living room onto the Mon River and the South Side invites the audience to imagine not only how the characters’ conflicts intersect with the city’s troubled past, but also how its present continues to grapple with the legacy of slavery that Wilson so penetratingly inscribed throughout his decade-by-decade exploration of the African-American experience.

This article was originally posted in The Pittsburgh Tatler on 1 September 2019, and has been reposted with permission.