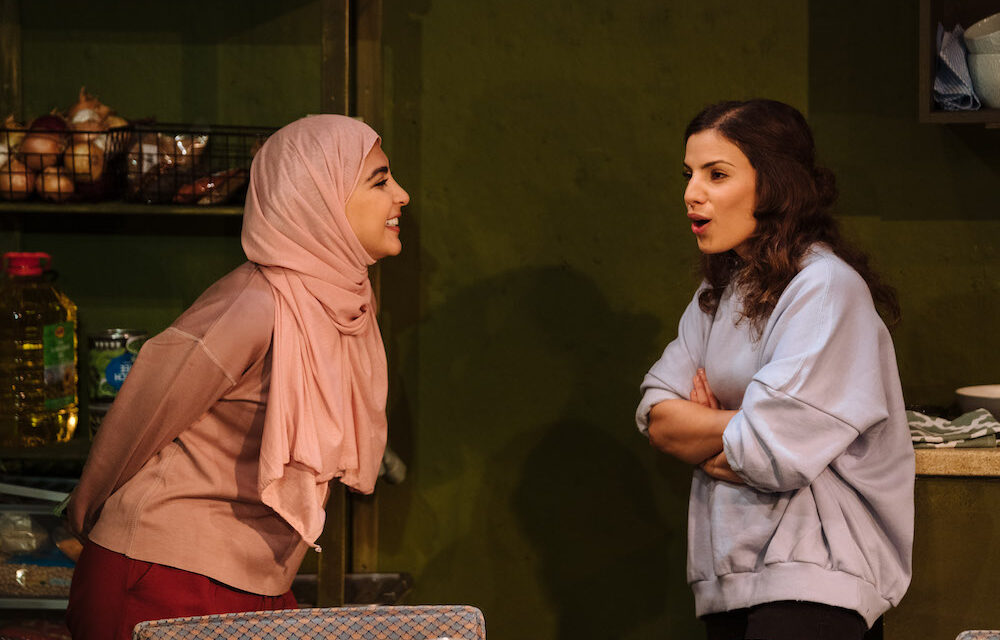 Oznur Cifci and Nalan Burgess in "Out of Sorts." Photo: Helen Murray.

One of the delights of London fringe theatre is its ability to nurture new talent. In this respect small is very often beautiful: far away from huge investments and dazzling lights, from money-heavy producers and temperamental stars, from audience appetites and box-office constraints, fringe theatre is often a space where new writers can develop their craft and their sensibility. And sometimes, just sometimes, such a venue can discover a real gem. This feeling of joyous discovery sums up my feelings about Danusia Samal’s brilliant new play, Out of Sorts, which deservedly won Theatre 503’s International Playwriting Award last year and now gets a deeply emotional production at this venue.

Basically, it’s a coming of age play wrapped in a family drama: Hussein and Layla, fiftysomething refugees from a conflict zone in the Middle East, live in a council flat in a rough area of London. Hussein is a hardworking cab driver who wants to help the couple’s two children, a pair of contrasting young women: Zara, in her mid-twenties, works in a law firm and is pretty well assimilated into British culture, especially when it comes to binge drinking; she shares a flat with Alice, her best friend, and work colleague. Zara’s 17-year-old sister, Fatima, is the complete opposite: she lives at home, values her family, wears a headscarf and joins her parents in prayer.

Alternating between scenes set in Alice’s flat and Zara’s family home, which she visits infrequently, Out of Sorts tells the story of one weekend when she has to confront the contradictions of living a double life. With her family, she pretends to be a good Muslim daughter, ready to obey her parents and marry Jamil, a nice Muslim boy who’s an estate agent in Brent (in fact, her father is already making a deal with him to buy their council flat and move to north London). With Alice, she plays the part of a fun-loving millennial, talking about parties, veganism, men, and diets.

On top of the tensions resulting from this double life, Zara has other problems. She doesn’t want to marry Jamil and can’t bring herself to tell her parents, and her friendship with Alice is not as sound as it might be. Part of the problem is that Zara won’t talk about her family, and especially the way her sister Fatima is refusing to take advantage of educational opportunities and prefers to write rap songs and use her faith to protect herself, and then there’s Alice, who wants her new black boyfriend Anthony to move in with them. When Alice decides to hold a party, these tensions come to a boil.

The play explores contemporary issues about identity in a powerful, yet also humorous, way. It describes, with impressive humanity and sympathy, the condition of migrants who sacrifice themselves for the sake of their children, who are not always grateful, in a context where racism is always just below the surface even in tolerant multicultural Britain (every character experiences some form of stereotyping). Showing how education offers a way of leaving home and achieving independence for young women from a Muslim background, it also illustrates the costs of this ambition. At the same time, it reminds us about class: Alice comes from a wealthy background so her support of Zara has a touch of patronage about it.

When these conflicts explode, Zara rapidly learns the truth of what Alice thinks about her, discovers a common connection with Anthony, and gradually begins to appreciate that her family might not be so bad after all. There’s a real sense of psychological development here, and Samal writes clearly and deeply about relationships, showing how difficult it is to be emotionally true to both friends and family. While her concern with truth shines through the play, she has also taken care to make the storytelling effective, not only by giving us an in-depth look at Zara’s whole family but also by putting both living spaces—flatshare and family home—on stage at the same time.

Despite some small niggles about the play (Anthony is a bit underwritten; some moments of recap are not really necessary), Out of Sorts is a terrifically moving play, its emotional integrity shining through the writing at every point. I particularly like two scenes in Act Two, one in which Zara overhears what her best friend Alice really thinks about her, and the other when she finally has a heart-to-heart with her mother. These episodes are both unflinching excruciating and full of deep feeling. At moments like these, Samal’s writing just blows you away.

In this account of the clash between Muslim heritage and the hipster lifestyle, the playwright is well served by Tanuja Amarasuriya’s excellent production, designed by Rebecca Wood and very well cast. Nalan Burgess (Zara) and Oznur Cifci (Fatima) play the perfectly contrasting sisters, while Nayef Rashed (last seen in The Looming Tower) and Myriam Acharki do ample justice to their parents. Emma Denly and Claudius Peters are similarly convincing as trustafarian Alice and Birmingham-born Anthony. What you remember is not only the power of Samal’s writing but its overall generosity — as well as its moments of tenderness when the truth really does set the characters free.

Out of Sorts is at Theatre 503 until November 2.