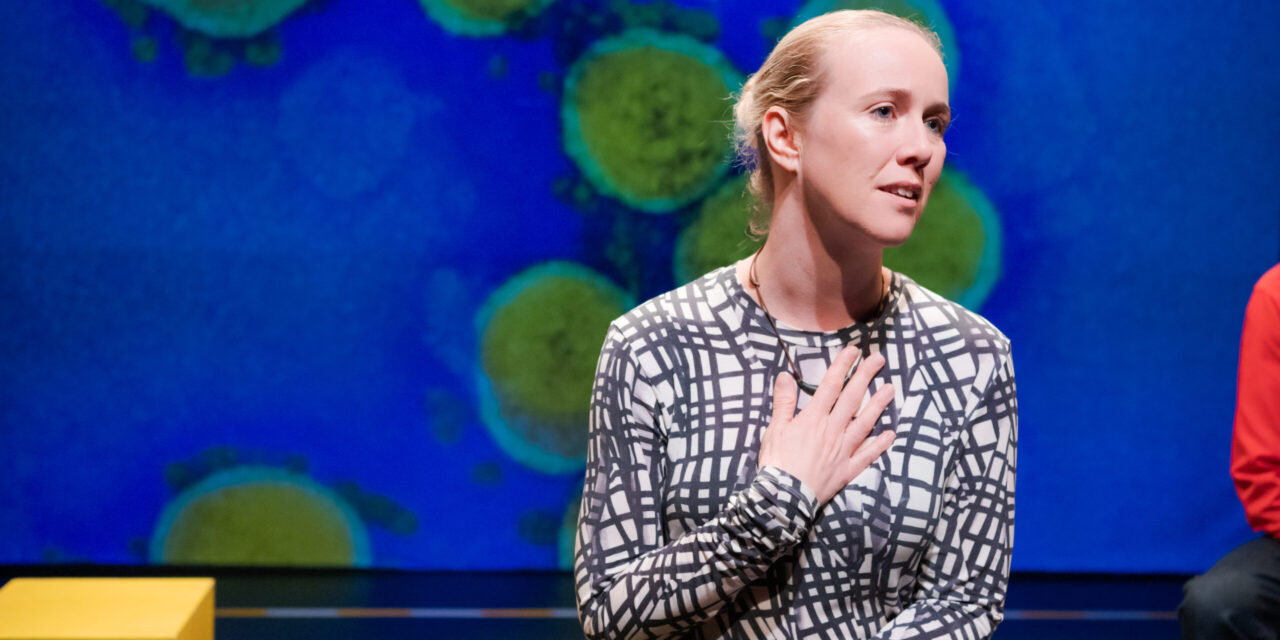 In The Theatre and Its Double, Antonin Artaud writes “We are not free. And the sky can still fall on our heads. And the theatre has been created to teach us that first of all.”[i] I thought of this quote several times while watching Transmission, a new verbatim play inspired by the New Zealand government’s approach to the Covid-19 pandemic, which brought about unprecedented restrictions on citizens’ freedoms. There was a potent “doubleness” in the house on opening night as audience members were aware of the rather incongruous sight of crown limousines and diplomatic protection officers guarding the crowded entrance to the humble BATS Theatre. The presence in the audience of the Prime Minister Jacinda Ardern, Minister of Finance Grant Robertson, and University of Otago epidemiologist Dr Michael Baker created an extra level of liveness and anticipation to the opening night excitement.

Transmission is based on interviews with Ardern, Robertson and Baker conducted by co-directors Stuart McKenzie and Miranda Harcourt, who had their own personal Covid nightmare in March 2020 when they and their 13-year-old daughter were on one of the last flights from London to New Zealand before the borders closed. Transmission was booked out before it opened, a sign of the intense public interest in its topic. As the opening night performance began, we were acutely aware of the VIPs in the audience, monitoring their responses. This added to the history-making significance of the production and its subject matter.

Miranda Harcourt was a pioneer of verbatim theatre when she co-wrote (with William Brandt) and performed a seminal solo show simply titled Verbatim (1993) about the causes of violent crime and the criminal justice system. Later she refined the form with McKenzie in shows such as Portraits (1997), Flowers from my Mother’s Garden (1998) and Biography of my Skin (2009) which, like Transmission, make extensive use of multi-media and photography interweaving with actors performing material edited from recorded interviews. McKenzie and Harcourt are also film directors (Voiceover (1996), For Good (2003), The Changeover (2017)) and their theatre style is a distinctive blend of the live and cinematic. Bordered with a rectangle of Covid-yellow-and-white tape, the skillfully spare production design by Mark McEntyre facilitates continual projections of scene titles, quotations, news media clips and photography onto a rear cyclorama and on two smaller mobile screens at the sides. 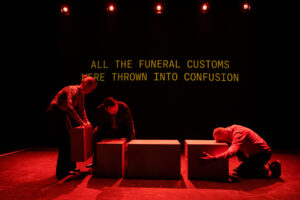 Ardern, Robertson and Baker are played by Sophie Hambleton, Tom Knowles and Tim Spite respectively. The play begins with light-hearted banter among the actors about who will play Jacinda Ardern, before settling on Hambleton as the obvious choice. This device serves to set up the game of the performance, where the actors frequently address the audience, draw attention to their role-playing, highlighting that this is a performance, and thus calling attention to the performativity of politics, the media and public life. In verbatim theatre, when and where the interviews were conducted becomes part of the story and apparently trivial details become significant. Uncertainty as to what Ardern had on her toast for lunch prior to an interview prompts the joke  “already history is distorted”, reminding us that all history, like performance, is constructed. This playful quality adds a surprising amount of humour to what could be a very bleak narrative and opens up the audience to the emotive quality of some of the revelations that follow. Hambleton shines as Jacinda Ardern, channeling the Prime Minister’s positivity, outstanding communication skills and steely resolve through her vocal patterns and physicality. The speech where she talks about the joy of being with her family around the dinner table during lockdown is profoundly moving. Knowles brings enormous warmth, humanity and much humour to his characterization of Robertson. His statement “we’re all in this together” was reflected in the collective mood in the audience both times I saw the play.

Transmission marks the welcome return to the stage of Tim Spite, one of Wellington’s most accomplished, versatile actors. For several years, Spite’s multi-award-winning SEEyD company created a series of highly original devised productions, often exploring ethically complex scientific issues. In one of these, the vaccination dilemma drama The Remedy Syndrome (2005), Spite played Dr Michael Baker, a role he brilliantly revives here. Baker’s ubiquitous media appearances since the pandemic began mean that the public are very familiar with his distinctive speech patterns and mannerisms, captured perfectly in Spite’s performance, which makes Baker a multi-layered character, unpredictable and humorous even he remains deeply concerned for public health. There is considerable dramatic drive in the first half of the play as Baker urges the government to take more decisive action, even as Arden and Robertson weigh up the monumental costs of shutting the country down. Here the editing of the interview transcripts is razor-sharp, creating the illusion of dialogue with the quality of a political thriller, highlighting repetition and conflicting perspectives. Even though we all know exactly what happened, the dramatic tension in the theatre is palpable.  There is a moment where Spite performs a gravity-defying leap from the stage floor to the top level of a yellow staircase the cast has assembled to represent the pandemic alert level system announced by the government on 21 March 2020. The audience gasps in response to a brilliantly theatrical moment that sums up in one virtuoso action the enormity of the decision to move the country to alert level 4 and lock the majority of the population down for six weeks. 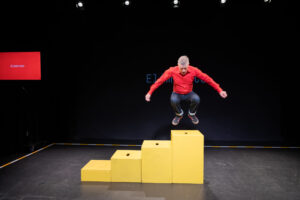 The second half of the play moves to a more personal insight into the private lives of Ardern and Robertson. Here there is a strong emphasis on family, a theme that resonates with McKenzie and Harcourt’s other verbatim works. Ardern tells us that her relentlessly positive mother is her biggest inspiration, and speaks movingly of her partner’s ability to make her laugh. When Ardern is asked how she copes with the trauma and tragedy that comes with her job, she replies “Not very well” and I believe her. Robertson describes how his decision to tell his parents that he’s gay was upstaged by the revelation that his father has been arrested for theft from his employer. Robertson’s loyalty to his disgraced father (“I still loved him but I never really forgave him”) demonstrates his compassion and is one of the experiences that fuels his commitment to social justice. The play delves into the psyches of the politicians who made such momentous decisions under extreme pressure to protect public health, and reveals their humanity in compelling ways. There is a dramatically effective tension between Arden and Robertson’s natural empathy and the urgency of making unprecedented decisions that will negatively impact on the wellbeing and livelihoods of citizens and potentially bankrupt the economy. The verbatim form allows us to see politicians as vulnerable, identifiable, living breathing people, rather than as media bytes or distant figureheads. In the face of a genuine crisis, finding empathy with these politicians heightens the sense of community, compassion and common purpose necessary to find our way through the pandemic. 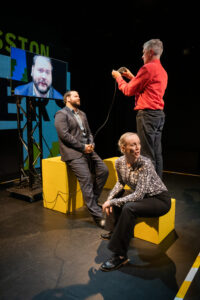 Given the positivity of the portrayals of Ardern and Robertson, the introduction of television journalist Mei Heron, played by Michelle Ang, provides some welcome dramatic balance.  Ang is the only actor not performing live, appearing on one of the small screens, a distancing device which is appropriate for her media focus. Despite the mediation of the screen, Ang is incredibly engaging and she takes us into some of the darker stories of the lockdown, giving a chilling example that illustrates that “lockdown isn’t a safe place for everyone”. Heron’s testimony captures some of the fear and division in society. Ang conveys the personal toll on her, recalling how the public turned against journalists and citing the pressures on her marriage- “my husband doesn’t like the journalist me”. Heron’s questions about politicians open up new perspectives on power. She expresses unease at the widespread adulation of Ardern and the Director-General of Health Ashley Bloomfield and argues “To think they are the gold standard of ethics is dangerous”. Heron’s scenes are a reality check, suggesting that the unified “we” of Ardern’s “team of five million” is aspirational rather than real. 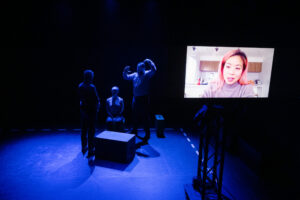 The terrible emotional impact on some members of the community is represented by the late appearance in the play of Lahleina Feaunati portraying Moira Sa’imoa, a Christchurch woman whose family were not permitted to have a funeral for her mother during lockdown.  Feaunati’s beautiful performance and tender singing enacts the moment when a funeral director delivered her mother’s ashes to her driveway, bringing home the human cost of the lockdown, while the generosity of Sa’imoa’s testimony represents the multitude of sacrifices by individuals and families to support the government’s Covid elimination strategy.

The aesthetic of Transmission is shaped by collaboration between the skilled senior artists assembled by the directing team. McEntyre’s flexible set allows the stage to be continually re-configured to suggest the varied physical and emotional spaces of the narrative. The considerable emotional shifts throughout the play are enhanced by the moody music of Andrew Thomas and the sensitive precision of Wendy Clease’s lighting design. The photographs by Peter Black, Luke Pilkington-Chin, Mark Smith and Kevin Stent resonate with the text, depicting images such as the desolation of deserted roads and cities, the paradoxical beauty of multi-coloured, microscopic images of the Covid-19 virus resembling abstract expressionist paintings. One of the most potent photos is a snapshot of Ardern and her ministers grimly seated around the cabinet table in the final meeting before the lockdown. This image is held for a few beats, and you can hear a pin drop in the auditorium. 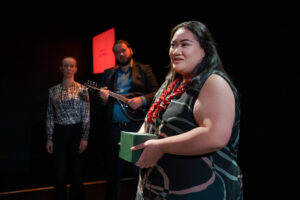 The threat of Covid remains in New Zealand, with many feeling anxious about the recent decision to open up a travel “bubble” with Australia, even as the government moved to temporarily prevent New Zealand citizens returning from India which is experiencing a horrific rise in cases. I have no doubt there will be many more plays dealing with the consequences of Covid in New Zealand, but Transmission goes beyond the immediacy of the pandemic to examine larger themes such as the nature of leadership, the tensions between political power and scientific knowledge, and the potency of collective action. Ardern’s ability to listen to the scientists and to make controversial decisions swiftly is contrasted with a rapidly edited sequence of press appearances by former US president Donald Trump, ineffectually repeating “it will go away.”  Transmission points up the need for leadership to be well informed by scientific research and facts, to be decisive and courageous, and to be based in an empathetic humanity. The standing ovation on opening night expressed the enthusiasm of the audience both for the artists and for the politicians and scientists in our midst. There was a sense of unity and hope, tempered by an awareness that the virus is still with us, and, as Baker chillingly warns us “there are much worse threats on the horizon”. How do we cope with threats such as pandemics and climate change? Transmission demonstrates that theatre emphasizing humane and decisive leadership and a sense of shared purpose certainly helps. When I returned to see the play for a second time, without the presence of the politicians, the mood was calmer in the audience, but the rapt concentration and reception was no less enthusiastic. The public demand has led to BATS Theatre making a recording of the production available online for a limited period of time. https://bats.co.nz/whats-on/transmission-on-demand/

McKenzie and Harcourt, their company and BATS Theatre are to be congratulated for utilizing the immediacy of live theatre to open up the moral and political questions surrounding one of the most significant events in recent history.