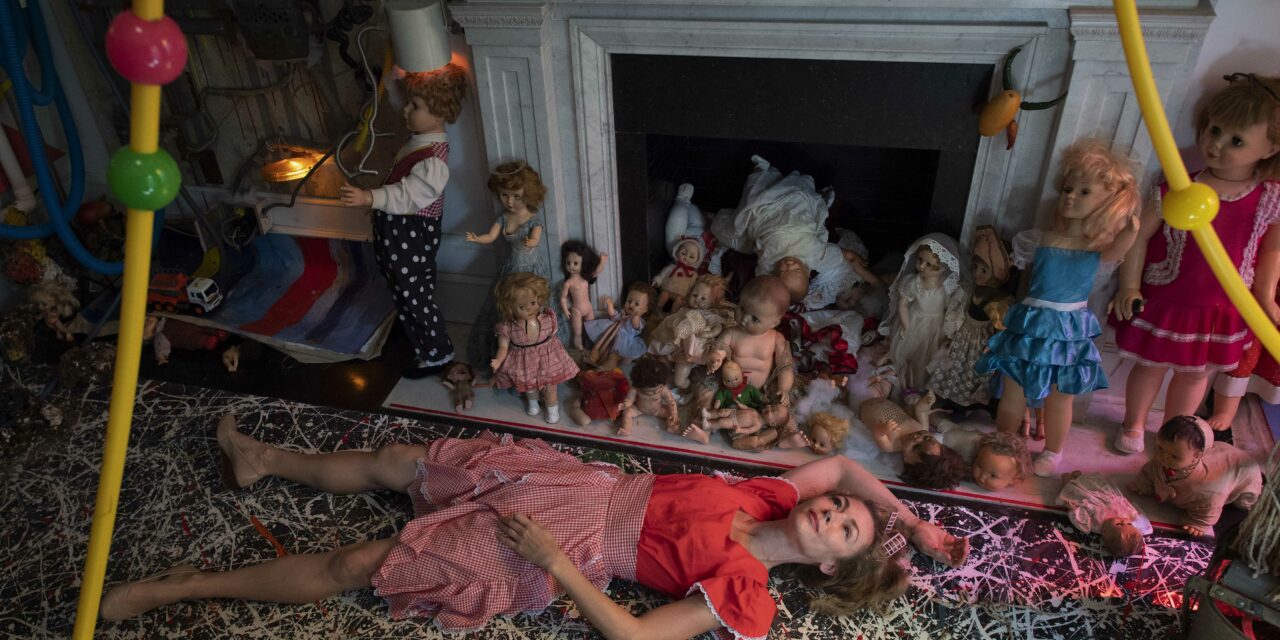 Multi-disciplinary hothouse The Cell in New York’s Chelsea neighborhood is currently home to a deliriously engaging performance called Found. Billed as an immersive theatrical experience, Found is a co-production of Mason Holdings and Sister Sylvester. The show consists of the venue’s street-level gallery space featuring a number of colorfully detailed paintings by artist Mikel Glass. Glass’s two-and-three-dimensional work is likewise an integral component of the various gallery/performance spaces located on the upper floors of The Cell’s West 23rd Street townhouse.

Found manages to subvert expectations from the start, as it’s unclear whether the art on display in the street level gallery is integral to the performance or a stand-alone entity. Some sort of printed text, in lieu of a conventional playbill, would help focus the intentions of the experience. Upon arrival one is led into a back room, with promises of ice cream and sangria, an auspicious start. A few lobby guests are then beckoned by actors upstairs, where the performance takes place. The actors, all young women, save two men in dresses, greet the audience members individually and proceed to maintain a hyper-feminine, girlish demeanor that is a manifestation of the doll motif at the heart of the evening.

Dolls figure prominently in both Glass’s paintings and intricate work that is equal parts art installation and scenic design. The evening is a mostly playful, diverting experience save for a bit of confrontation in a gallery festooned with what appears to be storage boxes arranged on the walls and floors. The performer in this space departs from the other female performers in that she is neither alluring nor demure. Suffice to say this segment of the performance proves to be a highlight of the evening.

Another memorable scene involves a gallery decorated to the nines in dolls and doll ephemera. The performer in this section invites the audience to choose from a selection of headphones with retro tape recorders that recount the demise of one or another doll. The audience is thus instructed to tour the doll-encrusted room, seeking out visual clues to augment the taped narrative. The effect is alternately disorienting and affecting, offering the evening’s most emotionally cathartic scene.

Next, a young male actor in a dress asks if we are ready to “go to heaven” and we’re thus escorted up to the venue’s top floor. There we are greeted by none other than Mikel Glass himself, a visual artist whose countenance suggests equal parts private gallery host and unaffected emcee. At the center of this space is a clear “canvas” that suggests Marcel Duchamp’s “The Bride Stripped Bare by Her Bachelors Even”, a suitable metaphor for a most unconventional evening. This final scene involves a female harpist whose playing does indeed suggest celestial imagery.

The evening concludes with Glass sitting on a white, heavenly chair or throne engaging in a monologue that contrasts with the stylized, playful performers who preceded him. His earthy demeanor and seemingly improvised text suggest that he is most comfortable letting his work speak for itself. The chief takeaway from this scene arrives when Glass explains the genesis of the project, a random encounter he had with castoff dolls in his neighborhood. It’s ultimately unclear precisely how this final scene is meant to cap the evening, as the ending of Found proves a rare moment of uncertainty in an otherwise meticulously choreographed experience.

With a bit more artifice integrated into the art in this final sequence, the performance would likely land with the impact it seems to be leading up to. In all, a highly entertaining, concise evening that offers up a refreshing alternative to the conventional gallery and theatergoing experiences. 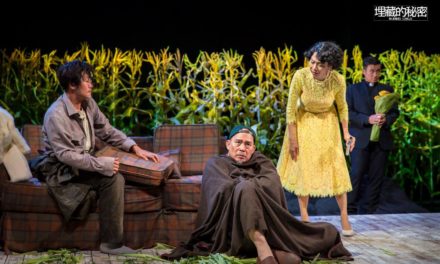