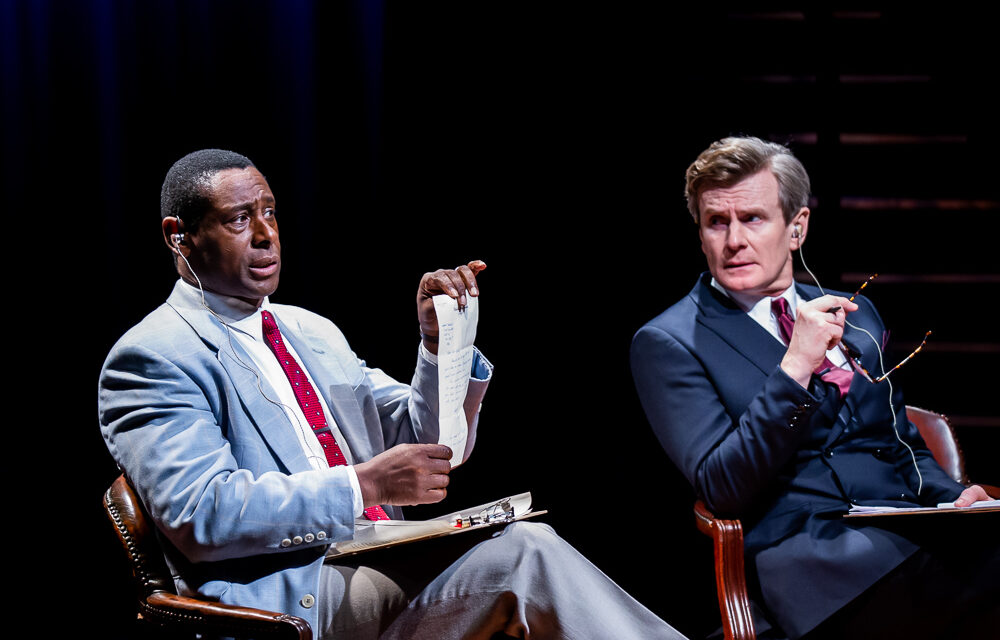 At the end of the 1960s, American soul poet Gil Scott-Heron said that the revolution will not be televised. Maybe that’s right, but a lot of other things were being broadcast in that decade, with the medium itself making innovative strides. One was the celebrity interview, and James Graham’s latest play, Best of Enemies, is about a crucial moment in American political television: the ABC network debates between Gore Vidal and William F. Buckley, Jr. during the 1968 presidential election. Based on Robert Gordon and Morgan Neville’s 2015 documentary film of the same title, Graham’s version gets a compelling production from Headlong Theatre Company’s Jeremy Herrin, and stars David Harewood, who makes a welcome return to the stage after 10 years.

We are in the pivotal moment of 1968, the year that witnessed the assassinations of Martin Luther King and Bobby Kennedy, as well as the May events in Paris (plus the shooting of Andy Warhol and the emergence of the Black Panthers). And in the left corner is patrician liberal novelist, and failed Democratic hopeful, Gore Vidal; in the right corner is William F. Buckley, Jr., stately arch conservative thinker and the man who previously debated with James Baldwin at Cambridge. Graham stresses the innovative television format which highlighted opinions instead of facts, and invited two leftfielders of their respective parties (Republican Buckley and Democrat Gore) to discuss both party conventions during the campaign in which Americans eventually elected Richard Nixon.

On both occasions, first in Miami and then Chicago, over a number of late-night clashes, the two men battled it out. Graham shows how both accepted this opportunity to advance their public profile, for reasons of extravagant narcissism and cash reward, each feeling superior intellectually and morally to the other, each determined to prove this in a contest of words. At the time, audiences loved it — and it’s easy to see why. There is nothing anodyne in these debates: both the witty Vidal and the patriotic Buckley tell us their opinions starkly and passionately. Off-screen, they discuss their tactics and what they learned under the heat of the studio lights. The story culminates in Vidal calling his opponent a crypto-Nazi, and Buckley losing his temper and calling Vidal a queer, and threatening to “sock” him in the “goddam face.” It’s a savage moment which rips away the veneer of civilized debate — just as the cops fought the student protestors outside with clubs and tear gas.

Graham’s central argument is that this television debate prefigures many of our current concerns: the election of celebrities to positions of political authority; the preference for entertainment over discussion; the anger of public discourse and the triumph of style over content. He shows how television companies invented a new format in order to boost ratings and make bigger profits, and provides a plethora of context: Andy Warhol, Aretha Franklin, and the dead Kennedies all have walk-on parts. Baldwin is given a voice, although women are under-represented. Vidal’s 1968 quasi-trans novel Myra Breckinridge adds a gender dimension to the satire, and the febrile atmosphere of the year of revolts and revolutions comes across clearly. Some details are fascinating: up until Nixon’s win, most political commentators spoke of the Democrats as the natural party of government in the States.

To use a serviceable cliché, the struggle between Vidal and Buckley was over two visions of America, in the era of the Vietnam War, the Dream and the Nightmare. Buckley understood that ideological conflict was a culture war. He was a white supremacist who believed in God, and wanted racial segregation to continue; he hated communists, gays, protest. By contrast, Gore had a queer sensibility, rejecting the label gay, but advocating personal liberation and tolerance. He hated authoritarian violence. And American foreign policy. And hypocrisy. The dream America of each of these men was the nightmare of the other, and, in 1968, the stakes were high as the student movement protested against war and oppression.

Although Graham gives his play a great ending, which includes an additional fantasy discussion which is much milder than the reality, the evening starts in a messy way, with exposition that is too detailed and too obscure. Someone should have told him to keep things simple. Once he hits his stride, however, the drama grows in intensity and relevance. What I miss is more on the backstory of the two main combatants: what really made Buckley and Vidal tick? The sense of messiness is compounded by some aspects of Herrin’s production, which involves too much furniture being trundled on and off stage, and awkward use of video (really this play just needs three chairs). However, the big gamble of the show is the casting of the black superstar Harewood as the white racist conservative Buckley.

This is a striking decision, and creates mixed feelings. Sure, it’s great that brilliant black actors can play white historical characters (Hamilton is another classic example), but it is also a choice that might puzzle those audience members who do not have knowledge of 1960s American culture. Still, Harewood has a huge stage presence and charisma, which gives his Buckley greater authority than videos of the original event. When Vidal complains that Buckley looks uncomfortable, Harewood refutes this by commanding the stage. The most acute moment is when Buckley’s wife asks if he is a “performing monkey” and a tremor runs through the audience. But this is only one brief comment.

Harewood’s magnificent performance, moving from uncertain rigidity to an embrace of confident celebrity, is a highlight and rather puts Charles Edwards’s Vidal into second place. What Edwards most successfully conveys is his character’s detached self-amusement. What you remember is his erudite Oscar Wildeisms and his putdowns, as when he describes Tom Godwin’s Andy Warhol as the “first man I’ve met with an IQ below 60, yet he’s a genius.” Syrus Lowe is an attractive if rather camp James Baldwin, John Hodgkinson a suitably ranting Mayor Daley, and Clare Foster as Buckley’s sympathetic wife. While Bunny Christie’s design is unexceptional, Tom Gibbons’s rock music soundscape is deliciously nostalgic. With its eye on our contemporary political malaise, Best of Enemies is a fine slice of time travel and, by its end, a powerful experience of theatre.

This article was originally posted on Aleks Sierz on December 15, 2021, and has been reposted with permission. To read the original article, click here. 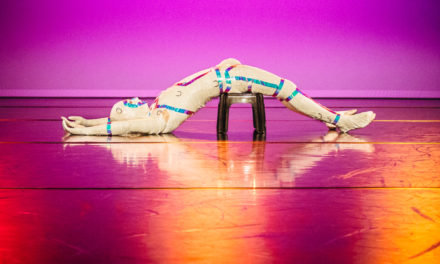