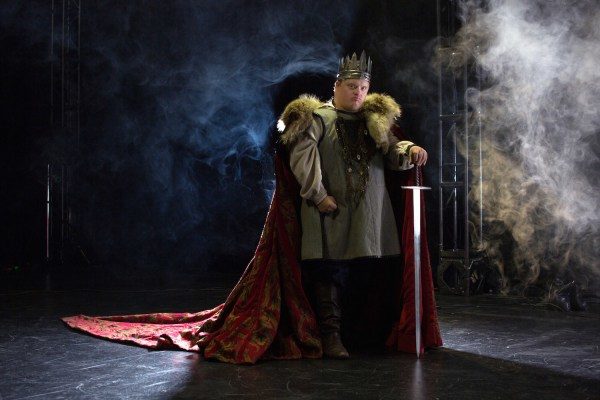 Jocelyn Pitsch reviews King Arthur’s Night, Neworld Theatre’s retelling of the Arthurian legend. With a neurodiverse cast and an emphasis on text and metaphor deconstruction, King Arthur’s Night is a compelling, comedic, and critical take on cultural myths and dynamics of power.

The legend of King Arthur and his court is usually told with a focus on its tragic and dramatic elements. From its opening moments, King Arthur’s Night announces that it will be different. Neworld Theatre’s telling is a lyrical and comedic feast with a spectacularly uplifting sonic landscape by Veda Hille. Hille’s score carries the narrative through its occasional lags to produce an atmosphere of complexity that matches the complexity of tone at work in both the text and the actor’s performances.

As Merlin, co-creator Marcus Youssef warns us that we are about to witness an unorthodox Camelot–one in which it is necessary to slow ourselves, take deep breaths, and quiet our minds. This exhortation is followed by the wickedly funny dialogue between Youssef and Niall McNeil as King Arthur. McNeil is the co-author of the piece and is also a professional actor with Down Syndrome. 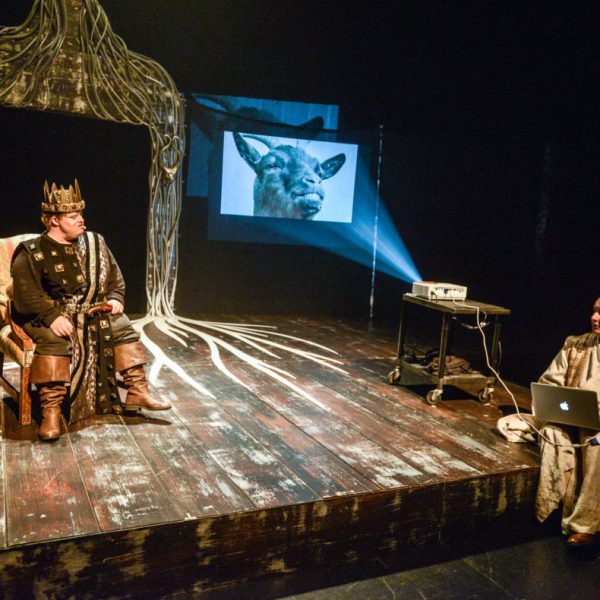 Together, Youssef and McNeil work through a slideshow that describes aspects of McNeil’s biography and its relationship to many of the themes and images we will enjoy as the show unfolds. Continually keeping to the power dynamics of their characters as Merlin and King, they play with both our expectations and prejudices about differently abled bodies on stage. Youssef offers comments and queries to McNeil that at first appear designed to keep McNeil on track and moving steadily through the set-up, even as McNeil turns this structure on its head by admonishing Youssef for certain comments or making corrections to the narrative as the slides progress. This is a display of power on the part of McNeil as King, just as it is a display of competence on the part of McNeil as an actor with Down Syndrome. It challenges the viewer’s initial reading of the dialogue’s structure and is a covert attack on the ableist, patronizing tone that such an introduction might otherwise connote. 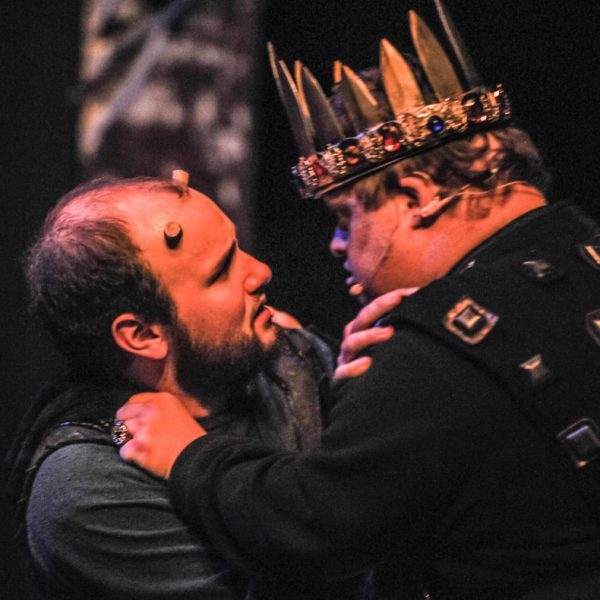 This section also introduces us to the recurring theme of goats that permeates this production, stemming from a childhood incident McNeil experienced at the Caravan Farm Theatre in the BC Interior, where he was raised. As a result, McNeil is both terrified of and fascinated with goats. In this show the goats and their “goatness” function as a complex metaphor for difference in a variety of ways.

Actor Nathan Kay (who does not have Down Syndrome) plays Mordred, the illegitimate son of King Arthur and his half-sister Morgana. Mordred was born with horns and several scenes examine his difficulty at finding a place in the court and society as a result of this. When Mordred is first presented to the court as a swaddled baby, many characters weigh in on what he might be, until finally Guinevere (played by Tiffany King, an actor with Down Syndrome) takes him and states definitively: “It’s a baby.” King Arthur responds by reaching into the swaddles with a long knife extended and cutting away Mordred’s horns. Thus Mordred’s difference is treated with suspicion and violence from the outset, especially at the hands of his own father. In a sly play on belonging and otherness, it is Mordred who does not fit into a court that has McNeil’s Arthur and King’s Guinevere as its heads. 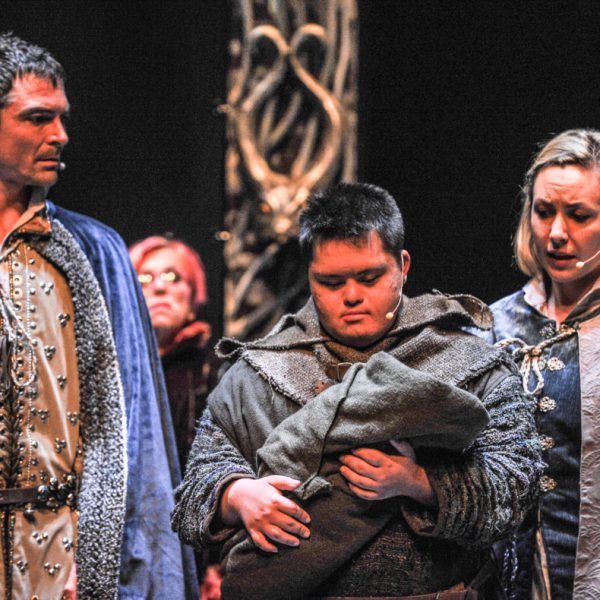 As Mordred and his mother plot the downfall of King Arthur, Mordred works with the soldier Saxon to train a herd of goats as instruments of war. The goats are embodied with striking physicality by actors Lucy McNulty, Amber Funk Barton, and Billy Marchenski, and treated by the text with pathos and humor. As the goats become steadily more integrated into the battle plan, Mordred begins to see his hopes for dominance realized in their abilities. The goats’ otherness thus acts as both a double for Mordred’s quest for belonging and his realization that difference can be deployed with powerful effects.

In a particularly hilarious scene, Saxon (played by Andrew Gordon, an actor with Down Syndrome) leads the goats through a serious, numbered series of fight stances that quickly become hilariously repetitive. During the fourth fight sequence, rather than launching into another simple movement pattern, Gordon enacts a long, silly, totally unexpected dance number, which the goats then repeat. It is a charming and side-splittingly funny moment that showcases the ways this piece consistently undermines the audience’s projection of limits on any performer and uses these expectations to deliver truly delightful moments of performance. 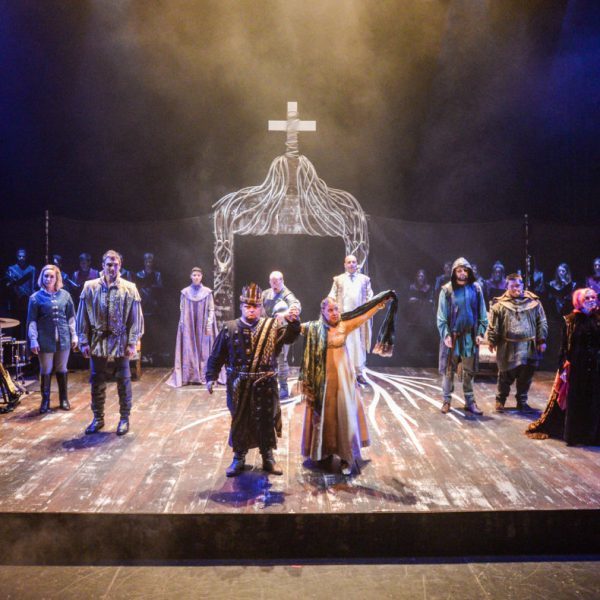 Early in the slideshow introduction McNeil points to a picture of a goat and states, “I was the goat.” A seemingly out-of-place statement at the time, this proclamation, in fact, foreshadows all that this piece has to say about resisting the temptation to view any state of seeming otherness as always already known. Indeed, King Arthur’s Night works to incorporate the varying abilities of its performers in such a way that mentioning which actors in the cast have Down Syndrome comes to feel paradoxically as incidental as it is significant to the overall meaning and impact of this work. This paradoxical complexity is the result of a layered and nuanced attention to narrative and metaphor that makes for a remarkable piece, from start to finish.

This article was originally published in Alt Theatre on April 19, 2018, and has been reposted with permission. 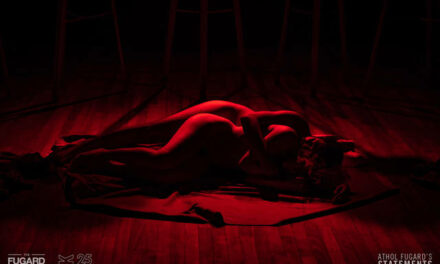