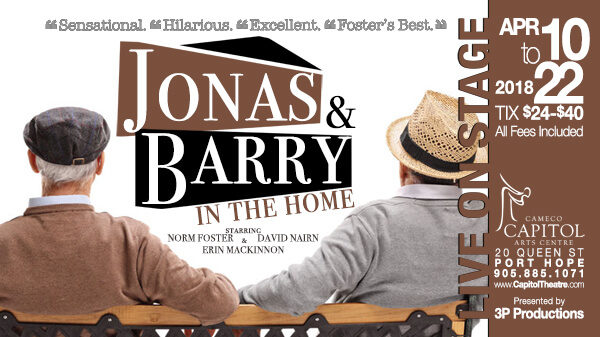 Poster from the Production in Port Hope.

Jones And Barry In The Home by Norm Foster; a 3P Productions, Directed by Derek Ritschel

As we age, we have two choices: to make the most of the golden years or to admit defeat, viewing the time we have left as a dark tunnel leading to oblivion.

In Norm Foster’s 2015 play—number 55 from Canada’s most prolific playwright—Jonas and Barry, who meet at Gateway Gardens seniors’ residence, represent the two viewpoints.

Jonas aspires to be an aging Don Juan. Barry, whose daughter Rosie works at the home, has given up on the thought of a happy ending. Because all three are alone and lonely, the situation does not sound an obvious springboard for a comedy. Yet, given Foster’s special talent for joking dialogue and sit-coms, Jonas And Barry In The Home has many in the audience laughing much of the time.

Unquestionably, the script contains numerous funny moments and some clever repartee. It is also endowed with unnecessary crudity and some unpleasantly tasteless segments, particularly an exchange that makes the Holocaust the starting point for a series of jokes about the aging male anatomy.

In the 3P Productions presentation, director, set designer, costume designer, and all three members of the cast repeat their roles from earlier productions of Jonas And Barry In The Home.

From a visual perspective, the show works extremely well. Becky Morris’ set, focused on the residence patio, creates the appropriate ambiance. Vandy Simpson’s excellent costume design underlines character and gives a clear indication of the changes the two men are undergoing as their friendship grows.

In terms of relationships, David Nairn as Barry and Erin MacKinnon as Rosie are entirely believable as father and daughter. Meanwhile, the playwright, as Jonas, offers splendid timing, but periodically seems to step back to concentrate on the sit-com aspect rather than completely settling into his role.

There is little doubt that Jonas And Barry In The Home, though not nearly as strong a script as Foster’s Old Love or as consistently amusing as his Here On The Flight Path deals with a popular subject—likely to become more popular with more of the aging population opting for retirement living in a seniors’ residence. However, in terms of sensitivity, Jonas And Barry In The Home is not in the same league as Bob Larbey’s wonderful 1985 drama A Month Of Sundays, also set in a seniors’ home.

This production of Jonas And Barry In The Home was seen in Port Hope. It will play in various theatres across Ontario through the summer.

This article originally appeared in Capital Critics’ Circle on April 23, 2018, and has been reposted with permission.