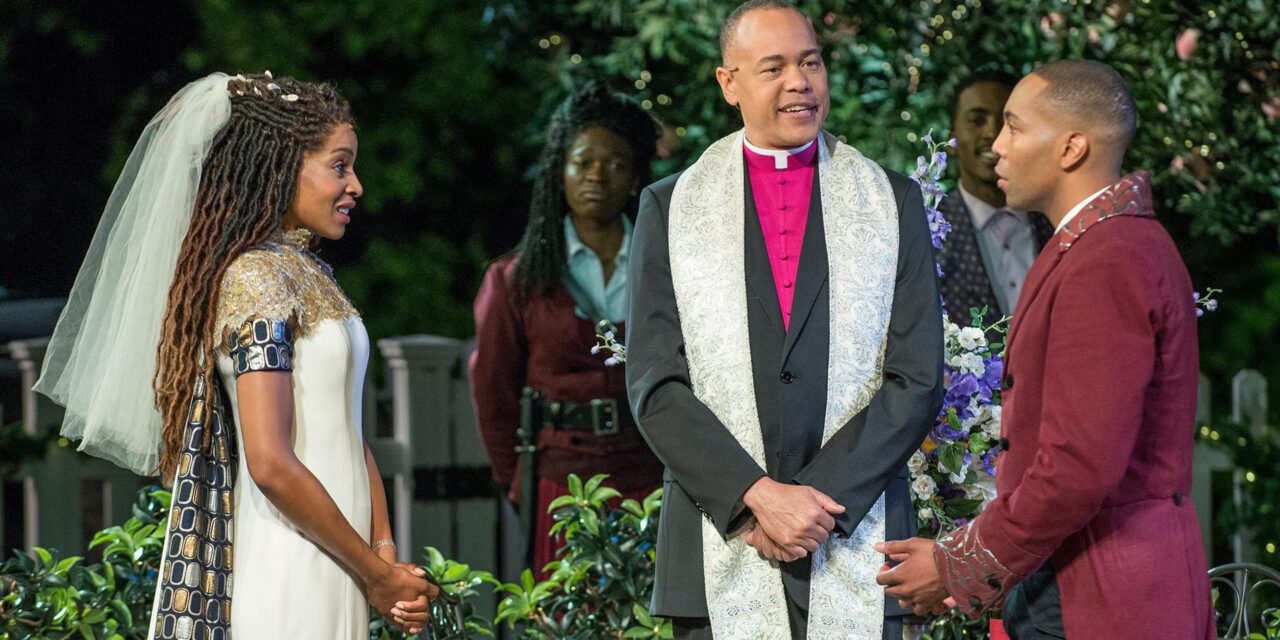 Margaret Odette, Tyrone Mitchell Henderson, and Jeremie Harris in "Much Ado About Nothing." Photo by Joan Marcus.

In this time of isolation, wouldn’t it be nice to take a virtual visit to the park? Fear not. PBS is streaming this past summer’s Shakespeare in the Park production of Much Ado About Nothing. Each summer in New York City, The Public Theater produces free outdoor performances of Shakespeare plays at the Delacorte Theater. Now, Shakespeare in the Park has become even more accessible. For the first time in over forty years, PBS is streaming a performance of the New York festival on its website. It’s worth noting that for people looking to watch theater online, PBS has several well-filmed productions on its website under its Great Performances series. However, Much Ado About Nothing, like the live shows at the Delacorte, is entirely free to watch.

Opening in a backyard in Georgia, we’re introduced to two cousins, Hero and Beatrice. One sings “America the Beautiful” and the other sings Marvin Gaye’s “What’s Going On.” The two songs shouldn’t work together, yet the melodies manage to blend together more often than not. Thus begins Kenny Leon’s Much Ado About Nothing, the Public Theatre’s 2019 offering of Shakespeare in the Park. One of the greatest challenges facing contemporary adaptations of Shakespeare is that the modern-day setting often comes into conflict with the original text. But like the two songs at the top, the production manages to fuse a Shakespearean comedy of errors with a 2019 story about a black family living in the American South almost seamlessly.

Much Ado About Nothing tells the story of an extended family get-together and the tricks that the various family members play on each other, some of which go too far. Following a war, Don Pedro and his men, including Claudio and Benedick, visit the home of Pedro’s friend Leonato and his daughter Hero. While Hero and Claudio fall in love quickly, Benedick and Beatrice have always pretended to hate each other. The others conspire to make them fall for each other, tricking the two reluctant lovers to admit their feelings. Meanwhile, Pedro’s jealous brother Don John orchestrates a cruel trick to make Claudio suspect Hero of infidelity.

One of the highlights of the play is the “wars of words” between Beatrice and Benedick, and the production makes the most of them. Danielle Brooks imbues Beatrice with southern charm, specifically of the subtly sarcastic “bless your heart” variety that she uses to roast Benedick. Two of the best scenes in the show are those in which the various family members have each of the two potential paramours overhear them claiming that the other one loves them. Leon directs these scenes with artful precision, so the audience is let in on the joke. And what a joke it is. Brooks hides in the audience as Beatrice uses her surroundings to camouflage her, while it’s clear that her family knows she’s listening.

In a show about misunderstanding that balances comedic confusion with mournful mistakes, the production allows both of them to breathe and transitions from one to the other with minimal tonal whiplash. A great example of this is the performance of Tyrone Mitchell Henderson, who pulls double duty in two small yet key roles, the tenderhearted friar and the comically curt sexton. That being said, some moments don’t entirely synthesize. The performances of the mostly-inept neighborhood watch veer from overly zany to too toned down. The songs that puncture various scenes highlight the themes of the show, but in the clear-cut second act they only slow down the pace. Political references add to the setting, but can’t help coming across as shoe-horned in.

Overall, Much Ado About Nothing uses its location to its advantage. Set designer Beowulf Boritt recreates a lavish house and garden. The garden naturally includes a peach tree so you don’t forget this is set in Aragon, Georgia, which is in fact a real place. When the characters say Aragon that’s not a mistake, although the original text meant Italy. The cast can dance, sing, and provoke hearty laughs and genuine tears. In these isolated times, it’s a welcome much ado about something. 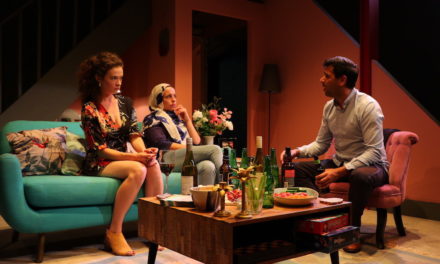