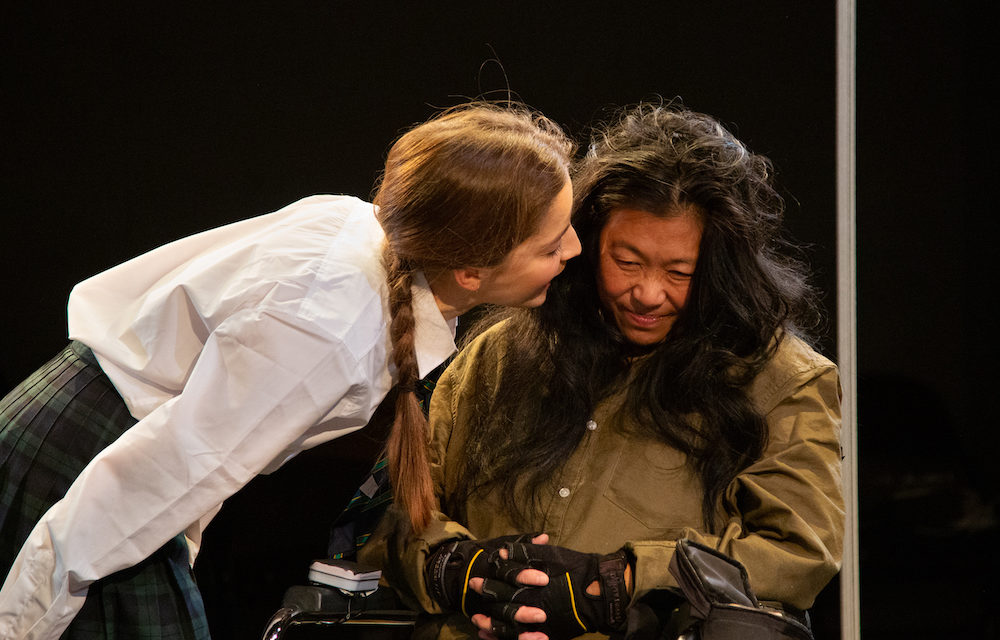 How do you judge artistic excellence? Is there such a thing as an objectively brilliant musician, or do subjective opinion and institutional bias play havoc with the way we hear the sounds that are played? Such questions are at the core of Jesse Briton’s new play, A Pupil, which gets its premiere in the compact studio space of this venue. Of course, there’s a long tradition of plays that examine the meaning of art, yet this addition to the genre proves that there are still things that need to be said, questions that are worth grappling with. And, in this case,  the production tapped into a really deep well of emotion and ambiguity that makes it a fine evening.

The set up is simple: Ye is a violin player who has been badly injured in a car crash and has now reached the end of her tether in her squalid flat in North London, which she rents from Mary, a live-in landlady who is getting increasingly fed up with her irascible and untidy tenant. As the story starts we see Ye in a wheelchair, preparing to take a load of paracetamol, washed down with whiskey. Then she is interrupted not only by Mary, who has an amusingly sharp line in personal criticism, but also by a new arrival: 17-year-old Simona, a Russian heiress who may, or may not, have an extraordinary talent for playing the violin. She is soon followed by Phyllida, the head of the string department at a prestigious conservatoire, whose aim is to get Simona to apply and thus butter up her oligarch father. Can Ye, who is retired, be persuaded to take Simona on as a pupil?

The situation is immediately intriguing. Ye is depressed and disillusioned, with a foul mouth that is well matched by Mary’s frankness and Simona’s bratish anger and passionate antagonism. The teenager is lonely: she is neglected by her father, her mother is dead, and the other posh girls at her school bully her. Without a friend, she acts like a spiky ball of fierce contradiction. Gradually, however, she recognizes in Ye a fellow non-conformist and a person who understands her gift for music. For gift she certainly has. Apparently, she has learned the violin not by taking lessons, but by imitating some of Ye’s old tapes. She can hear and reproduce music, rather than being able to read it. If she is a genius, then a self-taught genius.

Over several sessions in this 90-minute drama, Ye teaches her to express the feelings that she has inside her, whether of spitting anger or laidback calmness, through her playing. As she points out, “no instrument is more important than the player.” But although Ye values Simona as a talented individual who has the guts to achieve a certain level of excellence by her own efforts, without guidance, this attitude is anathema to Phyllida, who believes that only with the discipline of professional training can you succeed and make a career in the world. Ye thinks that just playing beautifully is its own reward, Phyllida insists that you have to be able to market your skills. To share your genius with the world.

But is Simona really a genius? One of the most interesting things in this play about artistic ideas is Briton’s ability to subtly trouble our preconceptions. At the start of the story, we sympathize so much with the despised Ye and the bullied Simona that we really want this to be a romantic story about a garret artist who passes on her gift to a young pupil, who then shines and achieves greatness. But Briton refuses to take this sentimental approach. No, his story is much more ambiguous: at the end, Simona does an informal audition for Phyllida, who is markedly less impressed by her playing than Ye was. Is she deliberately downplaying the youngster’s talent as a way of persuading her to come to the conservatoire, or is Simona really not a genius at all?

After all, Simona has already told us that her father, a billionaire businessman, thinks that with a bit of effort anyone can learn to play music. Perhaps he’s right. But then so is Ye, when she says that there is a qualitative difference between very good and sheer genius. But, of course, Ye feels very depressed so maybe her opinion of her pupil’s playing is colored by this, and by her pride in discovering a great instinctive musician (Simona clearly has perfect pitch). At the same time, there’s a sexual charge in Ye’s interest in the teenager, who is not only a passive pupil: in one critical incident, she teaches Ye a valuable life skill. And is it true that the discipline of studying music at an institution will destroy any innate gift?

This is a play that relies heavily on character as well as ideas. Ye is an extremist who, in one heart-stopping moment, looks as if she is capable of a horrendous act of violence. Simona is a damaged teen whose natural talent could be either crushed or exploited or given its full rein. Phyllida is a career musician with a hard-headed understanding of commercial realities; she is also an old friend of Ye’s so she understands just how far the violinist has fallen. Even Mary, who is at first portrayed as a comic character, enjoys music, especially the kind you might hear in the Baptist church. The racial mix here—Chinese, Black British, Russian and English—well reflects the society that has been watching the Phoebe Waller-Bridge’s Killing Eve, which has a similar racial mix, over the past few weeks on BBC television.

Jessica Daniels’s taut production, on Jessica Staton’s design which features hanging violins, some smashed, some intact, and strings for door frames highlights both the play’s ideas and its music. And what music. Helped by composer Colin Sell, Flora Spencer-Longhurst is excellent as Simona, her acting being convincing and her playing being thrillingly alive and deeply felt. Her music-making perfectly conveys the spirit of a self-taught novice while often reaching almost angelic heights. Lucy Sheen’s Ye is likewise impressive, conveying a profound sense of dark despair as well as wisdom, while Melanie Marshall’s acerbic yet warm Mary contrasts well with Carolyn Backhouse’s professionally-minded and detached Phyllida. A Pupil may not be a work of genius, but it does make you think, and, perhaps more importantly, feel.

This article was originally published in Aleks Sierz on November 6, 2018, and has been reposted with permission.

Ken Cameron’s “Harvest”: A Funny And Perseverant Take On The Shocking And Unexpected 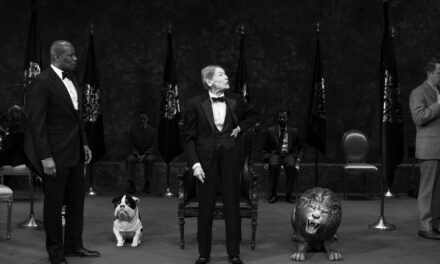