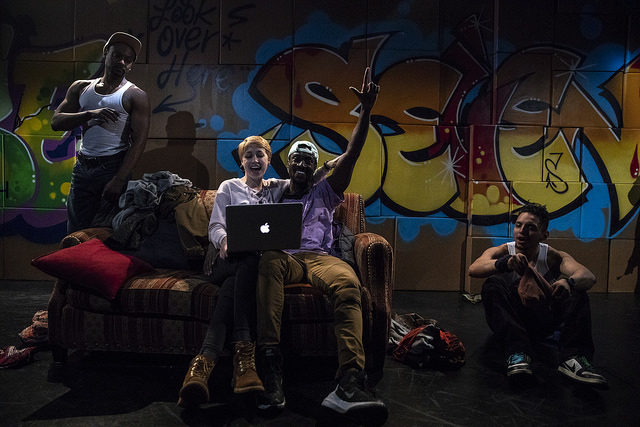 This Is Modern Art, originally commissioned by Chicago’s Steppenwolf Theater, makes its New York debut courtesy of Blessed Unrest this June. In their brief introduction, Artistic Directors Jessica Burr and Matt Opatrny encourage the audience to participate afterward in the online “controversy.” It’s true that a back-and-forth took place in response to critics’ disfavor of the of the play’s premiere production in Chicago in 2010, though there were no signs of contention evident during the talkback that followed the performance I attended.

Danger is discussed as part of graffiti’s appeal, doubling as its anchoring price. This Is Modern Art is inspired by a group of actual street artists who “paint bombed” a Chicago museum and were consequently sued by the city for a steep $1M. But if risk is inherent to the validity of the art, as guest graffitist Keo asserted in the post segment, what, practically, is the ask behind the artists’ plea of unfairness?

The racially diverse cast is refreshing, but Blessed Unrest’s choice of talkback panel was unilaterally vanilla and male. Confusingly, both play and panel express that inclusion in the existing art canon and the midway concept of “permission walls” are simultaneously spurned and participated in by graffitists. The “art world” gatekeepers, also racially diverse, are similarly portrayed as both spurning and embracing of the artform: binary camps of quasi-purity on either side of the legal aisle which function as two sides of the same coin. Maybe that’s a point the playwrights are making?

The play sprays a scatterplot of points that are somewhat related and sometimes contradict each other. Here are a few: the question of who makes art and for whom art is made, making art under given names or pseudonyms, street art as vandalism, street art as a function of visibility, art as war, graffiti as an act of rebellion, graffiti as an art that belongs in the traditional canon, oral history as it relates to marginalized populations, and pride in crossing territories.

Surges of drama in This Is Modern Art are also episodic, defying the traditional dramatic through-lines that often help theatre deliver catharsis to its audience. Perhaps playwrights Idris Goodwin and Kevin Coval deliberately crafted this arrangement, a variation on visual “pointalism” as artistic expression. Or perhaps that stretch is simply this viewer’s reach for a thread to connect the dots.

Something the play does well is offer its actors a chance to display quick gear-shifting, and in this rendition, the actors step up to the plate. There are several sequences where the main characters deliver pensive, stationary soliloquies immediately after running veritable laps in high-energy chase scenes. (Those familiar with poetry will easily lift the spoken word roots of both playwrights from the play’s use of language.)

Andrew Gonzalez’ portrayal of J.C. deserves particular mention. Handling pivotal moments of the above-mentioned gear-shifting, his authenticity is unwavering through hefty emotional and physical transitions. Set designer Matt Opatrny optimizes the blackbox space and director Jessica Burr highlights the choreographic nature of street art; the combination results in a communication of pressurized energy as the audience watches the actors build a wall-sized piece of art in real time.

“You’ll never catch me,” Gonzalez challenges in a final soliloquy. If there were a center to be assigned to This Is Modern Art’s scatterplot…