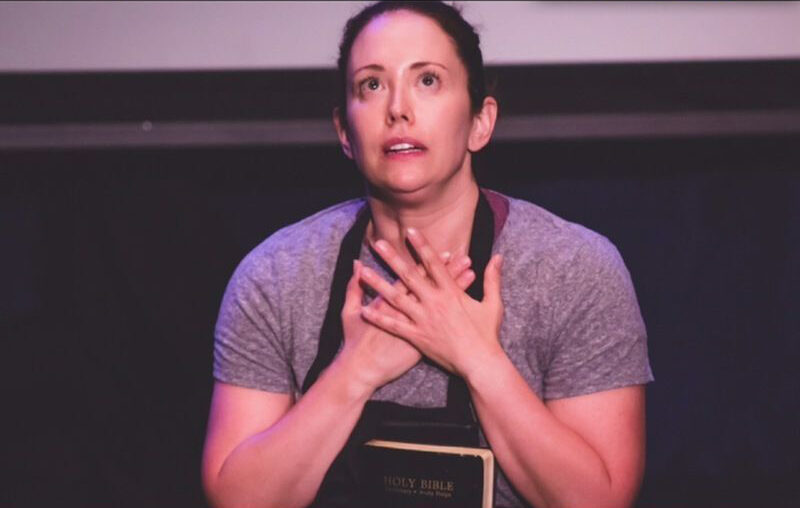 Questions of faith are filtered through a mother/son relationship in Saving Cain, written by Aaron Kozak and directed by David Chrzanowski at Hollywood Fringe Festival.  Leah Verrill plays Lauralai, a religious single mother who practices her faith by listening to audiotapes made by a fringe preacher instead of attending church.  Lenny Hernandez plays her son Levi, a teenaged boy whose mother has moved him from school to school when he has either gotten into trouble or, more frequently, when she no longer approves of what he is being taught.

The play opens on Lauralai in discussion with Ed (Jim Martyka), who talks the nervous mother through the class schedule Levi will be taking on at his latest new school.  She wants to see the curriculum for many of the classes, a request that Ed takes in patient stride even though we can tell it’s an unusual request.  Levi befriends Bryan (Christian Blake Splitt), a self-assured gay classmate who introduces his sheltered friend to music and culture that Levi’s mother has strictly forbidden in the home.   Levi joins the wrestling team and excels in his classes, his sites set on going to Columbia and getting as far away from his mother’s repressive rules as possible.

As Levi pulls away, Lauralai begins a friendship with professor and leader of a spiritual group Nancy (Cindy Chavez), who encourages her to open up to being with people.  Wrestling teammate Bobby (Travis Joe Dixon) threatens Bryan and Levi step in to fight for his friend, resulting in a broken arm.  Levi gets hooked on his pain medication and though he graduates from high school and storms out of his mother’s house after a brutal fight where he tells her just how done he is with her.  After Levi is gone, Lauralai opens up to Nancy and tells her why she is against organized religious groups; her pastor got her pregnant, never acknowledged the child, and she had to suffer alone.

Nancy encourages Lauralai to try dating Ed (something she does not seem ready to do) and to confront the pastor, but the man died years ago and only his son Peter (Daniel Cirilo) is left.  Lauralai tells Peter the whole story and he writes her a check to give Levi part of his father’s estate.  Levi returns from New York a drug addict who is unable to put even two days of sobriety together.  Lauralai seeks Bryan’s help but he relates all the times he’s already tried to intervene and suggests it’s time to let go.  She decides to tell Levi the truth about his father and gives him an option:  take the check and go – or use the money for rehab.  He chooses the check. In the final scene, Lauralai is with Nancy and her congregation about to get baptized.  Ed arrives to witness it, though he made it clear to her earlier on that he’s not religious.  She smiles at him, and steps toward the water.

There are some strong performances in this show, with Lenny Hernandez as Levi standing out as the most engaging, gut-wrenching and grounded.  Leah Verrill manages to keep Lauralai from looking too much like a caricature of a holy roller but she never stops moving throughout the play – if she’s standing, her head and torso are all over the place – if she’s seated, her hands and head are again all over the place.  It feels ‘flighty’ and might have been a choice but one can’t help but wonder what the character might have been if perhaps one or two physical traits like this were chosen rather than have the whole body constantly engaged in motion.

The script leaves us with a lot of questions and some conflicts are either too easily conceived or too easily resolved.  Nancy seems to say she runs a non-denominational spiritual center yet she ends up baptizing Lauralai into – what?  A church?  It’s hard to buy the changes in Lauralai.  We never really see the script take her from sheltered religious faith into trusting Nancy and one might suspect that she would be even less likely to let Nancy know everything about her life given her past experience with spiritual leaders.  Tonally, the play presents us with a humorous take on Peter’s Pentecostal congregation – or does it?  We aren’t sure what to think or feel about religion by the end, and that’s a pitfall given the title, subject matter, and characters.

Though it is not news to learn that one instance of pain management in a person’s life could get that person addicted to drugs that leads them into a downward spiral, the way it plays out here feels half-explored.  We have a character in Levi who was brought up in an extremely repressed religious environment who becomes an irredeemable addict yet there is no moment where the script pauses to wonder whether the environment might have had anything to do with the outcome.  It seems his fall is entirely based on his having no faith but the script doesn’t fully come out and state whether it wants us to believe that or not.  That oversimplifies the drug problem in a way that undermines the performances.

Lauralai has had some traumatizing experiences with men in the past, which is why her first romantic encounter with Ed makes sense, however, the script never digs in and lets us see her struggle to overcome that.  Instead, we get Ed apologizing profusely and Lauralai forcing a smile to say ‘it’s okay’ and somehow they are reconciled by the end.  We aren’t sure what he is to her – a friend, we assume.  Given the fact that the first man in her life led her to force all other men away, we might hope to see something more about this transition.  Peter believes Lauralai’s story pretty quickly and writes a check out to her without knowing her full name.  Somehow the check he writes is legal for Levi to take and cash without her.  Maybe we have become cynical with news story after news story revealing new scandals in churches across the globe but the idea that Peter wouldn’t fight this at all after just seeing a picture and listening to Lauralai shout at him is hard to buy.

Lastly, Lauralai had given Levi a photo of his ‘father’ and told him that he died a war hero in Desert Storm.  Levi keeps that photo on a table in the scenes where he is in his room with Bryan – which amounts to perhaps two out of many in the play.  When we aren’t in Levi’s room, the photo lies face down in a black frame on a light colored tablecloth throughout the play, no matter where we are asked to imagine we are [restaurant, wrestling match, spiritual center].  Though this photo of the absent father might be there as some kind of statement, it ends up being a distraction that we wish someone would deal with as we have many blackout moments where cast members constantly rearrange the furniture. It might have been just as successful had the furniture been left in one place and the photo only presents when necessary.

The play was produced by Leah Verrill, Lenny Hernandez, and Aaron Kozak.  Tiffany Walker also appears as Dr. Zellner and a Pentecostal Woman in Peter’s congregation.  Travis Joe Dixon was the Fight Director.  Corwin Evans was the Creative Technical Director.  Kirk Diedrich was the Graphic Designer.  Taylor Schulte did Make-up and the arm cast for Levi.  The Wooden Cross in the back of the set was built by Bennett Seymour.  Publicity by Jim Martyka.