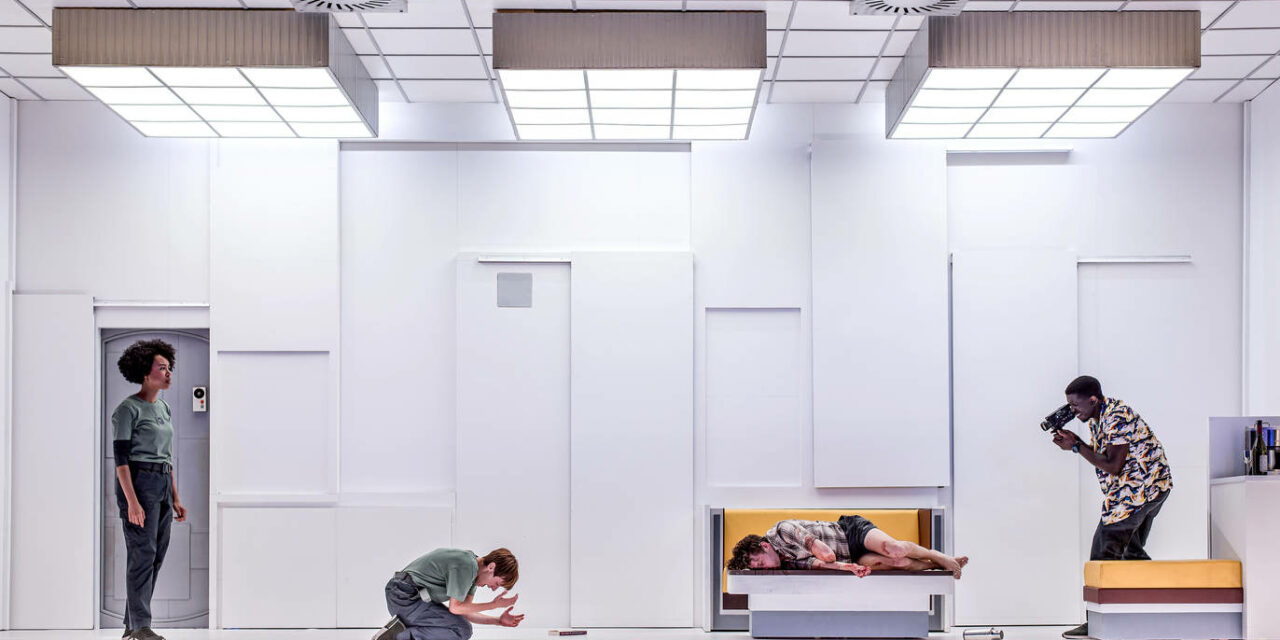 The cast of "Solaris" at the Lyric Hammersmith Theatre. Photo: Mihaela Bodlovic

Far away from Earth, there is a planet called Solaris. It is covered by an ocean and orbits two suns. And it has a consciousness of its own, capable of reading humans’ dreams and turning them into physical form.

David Greig’s new play Solaris, adapted from Stanisław Lem’s 1961 novel, begins with the psychologist Kris’s arrival in a space station hovering near this cryptic planet. The scientists on board—Sartorious (Jade Ogugua) and Snow (Fode Simbo)—have been there for two years, and as it turns out, their captain Gibarian (a precise Hugo Weaving, seen only on video) has recently committed suicide.

Shortly after Kris beholds the ever-changing, bright colors of Solaris, she finds in her room the exact double of an ex-lover, Ray (Keegan Joyce, magnetically fitful), who is actually an outgrowth of Solaris. As Kris’ scientific desire to make contact with Solaris blends in with her rekindled love for a deceased partner, she grows convinced, to her colleagues’ dismay, that she can never understand the planet without giving herself over to it.

If much of this sounds somewhat cinematic in nature, then it’s because that’s exactly how Solaris wraps itself around the audience. Matthew Lutton’s thoughtfully restrained and deeply atmospheric production has the rapid tempo of a compact and thrilling science-fiction film. And beneath the sleek surface of both the acting and design lies an increasingly disconcerting mass of tension.

Polly Frame’s commanding performance as Kris is perhaps the best example of this intriguing duality: It is a given that her initial confidence, detachment, and prudence are gradually replaced by her sheer curiosity about and compassionate concern for Ray/Solaris. But what’s more interesting is that even at the beginning she reveals signs of the irrational, and at the end, when reason appears to have gone out of her, a tinge of obdurate clear-headedness still lingers. Hers is a knotty portrayal—and certainly a major fuel of the play.

While a space station could have been a tricky setting to capture on stage, Hyemi Shin’s effortlessly nimble set design teems with efficiency. With just a few sliding panels and hidden drawers, a pristinely white room acquires the power to turn into a number of discrete locations in the station. Lutton’s direction makes frequent use of these changes while jumping from one short scene to another, during which a black screen comes down and occludes the entire stage. These transitions are often accompanied by projections of extracts from Gibarian’s diary, as well as animations of fluid matter—both of which dilute the production’s confident posture.

Though the various scenic configurations remain similar throughout, Paul Jackson’s exquisite lighting ensures that each scene has its distinct aura: the overwhelmingly vibrant colors reflected from Solaris’ oceanic surface fill the stage with a vigor that borders on the sublime. Like the artist Dan Flavin’s fluorescent installations, these lights are at once ominous, tender, and electrifying. This unusual trio is further established by Jethro Woodward’s ambient sound design, which underpins the action in key ways.

Greig’s script boasts a brevity that not only complements this richly spare staging, but enables this contextually distant story to stand upright in a theatrical environment. The expository, “factual” details one would expect from a work of science fiction are there, often assigned to Gibarian’s projected video recordings. Yet what makes Solaris a captivating watch is not so much these moments of world-building as the painfully human stories that unfold beside them. The “visitors” sent by Solaris (i.e. Solaris itself) force the crew to confront a host of questions about sentience, personhood, and intersubjectivity—not to mention death. Greig’s pen treats these meditative aspects of the novel with uncontrived delicacy, lacing them through the plot in pithy but provocative ways.

What may ultimately testify to the success of Solaris as a dramatic work of science fiction is that one cannot help but wonder, upon seeing it, why this otherwise popular genre finds its way onto the stage so infrequently. Because a dazzling example like this leaves you wanting more.