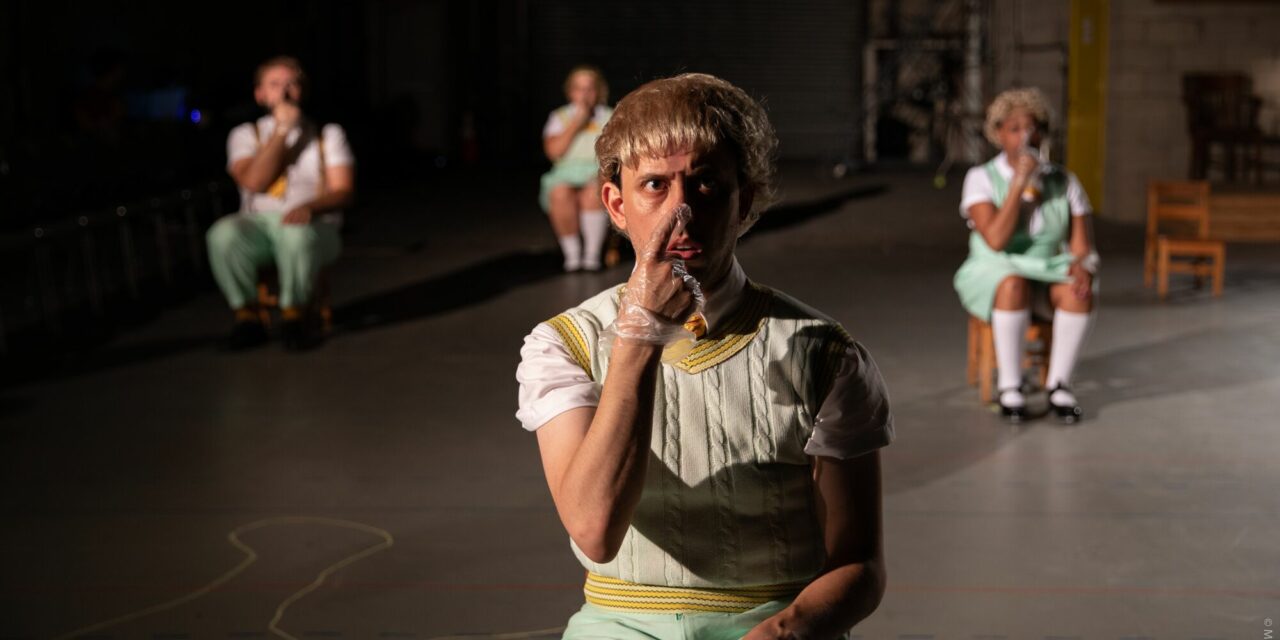 Sport is sometimes defined as a task with arbitrary but necessary constraints. Education is never defined that way, but it could be. Skinnamarink, the new show by the experimental theater company Little Lord, takes aim at early childhood education. With great silliness, the show depicts the ridiculous potential of performative learning.

Little Lord, which calls its shows “junk spectaculars,” crafts its scripts out of found materials. They nod to Duchamp not just in their use of ready-mades, but also in their comic grotesque. The dialogue in Skinnamarink is drawn from a series of nineteenth-century American grammars called “McGuffey’s Eclectic Readers.” In language that anticipated the Dick and Jane books of the mid-twentieth century, McGuffey’s Readers were designed to help children achieve through simple, straightforward text with righteous undertones. The text is easy to laugh at from the vantage point of our cozy, atheistic, hyperlinked twenty-first century, but the books taught generations of Americans to read, and their influence was noted by Henry Wadsworth Longfellow and Mark Twain, among others. 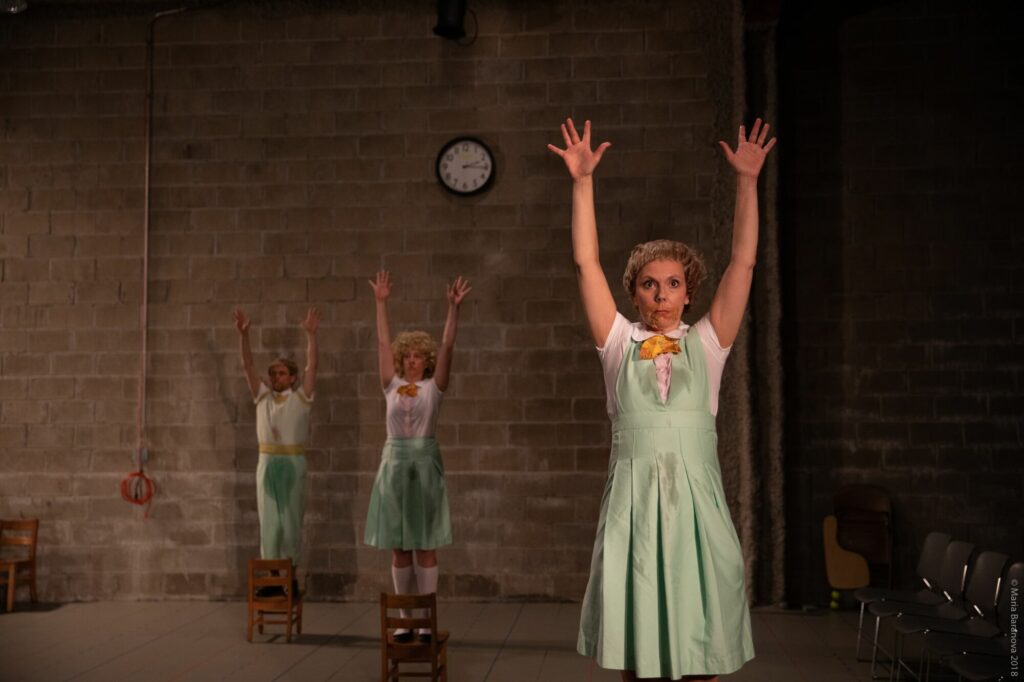 The problem with learning to read, though, is scaffolding. Before Dr. Seuss penned The Cat in the Hat, and frankly, after too, form was often sacrificed to content. The language of the McGuffey Readers is divorced from how anyone in their right mind would actually speak. (“I see the axe. It is my axe. My axe is by me.”) My early childhood reading was all Dr. Seuss and P.D. Eastman, so the language didn’t resonate with me in that way. But what it did remind me of what foreign language classrooms, where you practice saying, “Excuse me, can you please tell me how to go by foot to the post office?” A friend of mine is studying French at Harvard and his workbook included the useful sentence “It is astonishing to note the rapidity with which the blood of birds coagulates.” But what else do you can you do with embryonic reading skills? Enter Little Lord for some show-and-tell.

There are eight performers in Skinnamarink. The honeyed yet authoritative voice of Kate Weber speaks to us through an intercom, evoking the teacher in the Charlie Brown cartoons, but she’s tucked away in a booth and only visible to half the audience. The other seven (Kaaron Briscoe, Joshua William Gelb, Fernando Gonzalez, Meg MacCary, Morgan Lindsey Tachco, Laura von Holt, and the director Michael Levinton) are schoolchildren. They wear different versions of a kind of uniform, polyester get-ups in mint green and pale yellow, and ill-fitting blond wigs. They have their noses taped up like Amy Sedaris as Nutmeg on At Home with Amy Sedaris. They look uncomfortable and terrified.

The show, which is a little over an hour and a half, unfolds over a school-day. The kids do reading exercises, perform dialogues, and sing vaguely educational songs that are drawn from, for example, The Electric Company and Babes in Toyland. And yes, the title of the show comes from the Sharon, Lois & Bram song. No, we never find out what a skinnamarink is. Instead, we realize what it’s always been: a meaningless word we ask kids to learn for no good reason. They also enjoy two “snacktivities.” What they do with peanut butter belongs in a John Waters movie, and the theater is so intimate, you’ll smell that chunky Jif for the rest of the evening. 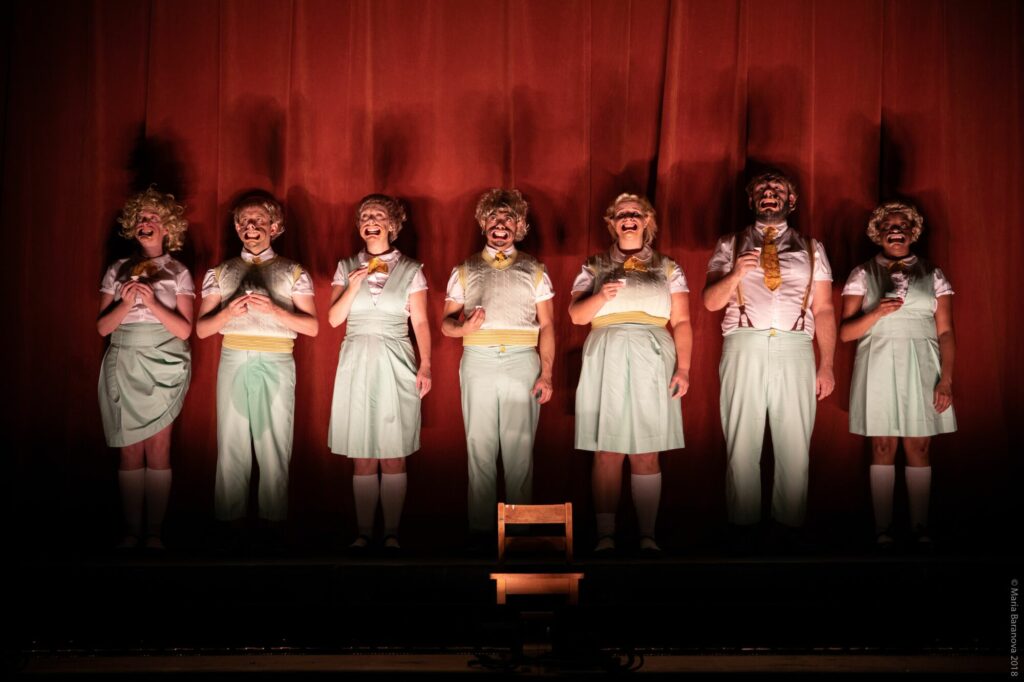 The performances were a bit uneven, with some actors more restrained than others. At first, I thought this was a directorial oversight, but it may have been on purpose. Because every class has that kid, not the class clown exactly, but just a little goofier, a little more conspicuous than the others. It’s hard to recognize naturalistic acting in the context of an absurdist show about childhood, but there you have it. In any case, what most struck me about the performances was their complete earnestness. Each of the actors captured the frightened, wide-eyed stare of children who are afraid they might get in trouble. The catch is, they’re not doing anything wrong. They’re trying their best to play a sport that has impossible, nonsensical constraints.

There’s an earnestness in the language too, goofy as it is. The McGuffey Readers and all books for early childhood have their own impossible constraint. Pedagogical methods become passé very quickly, but the goal of education doesn’t change: teaching kids how to be little humans.

Skinnamarink is everything theater about childhood should be: nostalgic, embarrassing, unpredictable, and bizarre. I love it whenever adults wholeheartedly deadpan children’s internal drama, like, again, Charlie Brown, or more recently, Hulu’s Pen15. But Skinnamarink squeezes itself into that space of childhood discomfort, where you know what you’re supposed to do but not why, when wants and needs have not quite coalesced to a sense of self-awareness.

So, boys and girls, what lesson does activity this teach us? Well, it teaches us how stupid our present – educational standards, interpersonal conflicts, rituals around eating – will look when we look back on it from the future. And if anything in your present already feels stupid, don’t worry. You’ll grow out of it.