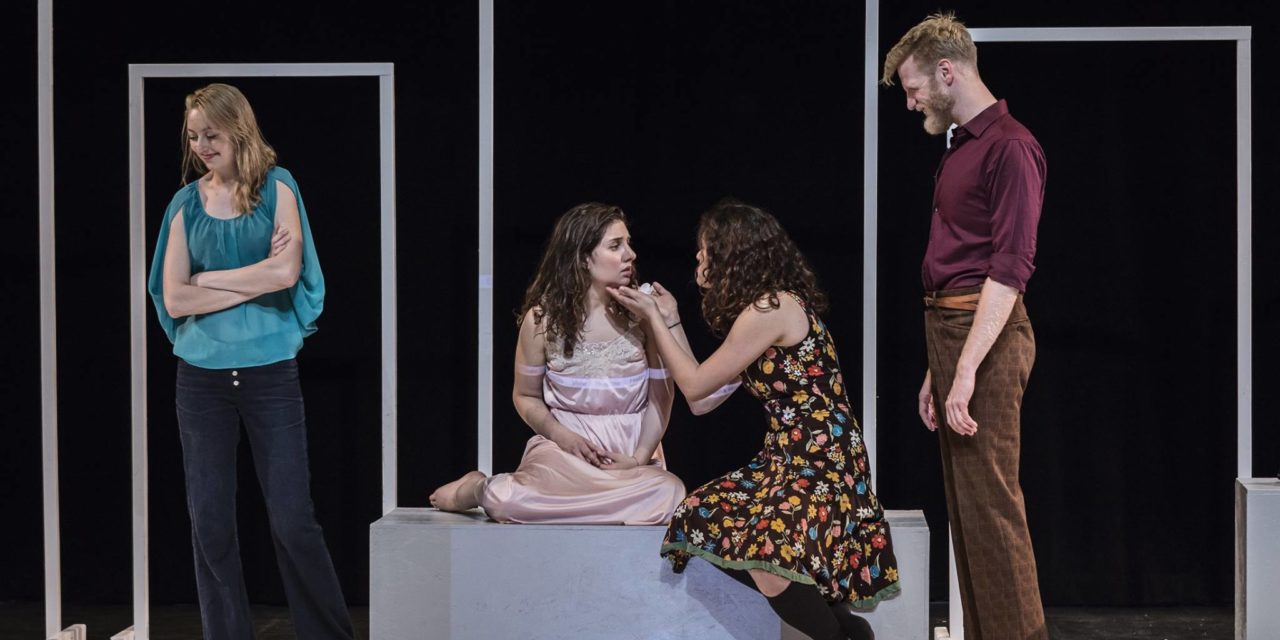 A Moment of Silence written and directed by award-winning Iranian artist Mohammad Yaghoubi was produced by his own Nowadays Theatre Company and in association with Modern Times Stage Company. From August 6 – August 14 SummerWorks Festival hosted Canadian premiere of this play with Canadian cast and crew. http://summerworks.ca/2016/artists/a-moment-of-silence/

The play has two storylines, the story of a woman (Shiva) who falls asleep periodically for a couple of years and each time wakes up to find out the world around her has changed drastically. She sleeps through the Islamic Revolution, the war with Iraq, a series of murders of dissident artists as well as transformations in her own family. Another story line revolves around the playwright creating Shiva’s story who keeps receiving phone calls threatening her life. The surreal portrayal of Shiva’s eccentric habit of having long sleeps is interwoven with the playwright’s writing process as she and her husband review and comment on the political events of the recent history of Iran.

Nowadays Theatre Company is always responsive to the current time events and stories, thus it remains keen on portraying life-like narratives and characters. On the one hand, A Moment of Silence is an audacious response to the brutal and unjust murders of intellectuals by agents of the Iranian government that occurred between 1988 and 1998. It also comments on quotidian socio-cultural issues that contemporary Iranians are grappling with including the mandatory hijab, lack of civil rights for an illegitimate child and lack of freedom of expression. On the other hand, inspired by the well-known biblical story of The Seven Sleepers, Yaghoubi dramatizes and examines the experience of “change” in human condition, and particularly Iranian life.

The play’s meta-theatrical qualities and life-like characterization present a surreal, poetic, and surprisingly comic meditation on Iran’s turbulent history and Iranians’ experience of unexpected “change” and its aftermath. It is also its playwright’s manifesto about intellectuals’ loss of freedom of expression and how this leads to losing joy and hope in personal life.

Despite being deeply contextualized in Iranian contemporary culture and politics, a good dramaturgy made A Moment of Silence relatable for Canadian audience while highlighting its universal themes and aesthetics. The details of these dramaturgical changes can be read in an interview with Yaghoubi, the playwright and director of the play, published in the next month issue.

Mohammad Yaghoubi is a multi-award-winning playwright, director, screenwriter, and theatre instructor. His directing credits include: Drought and Lies, A Moment of Silence, Writing in the Dark, Moon on the Water, The One Only Possible Way, Geraniums, Red and the Rest, Dance of the Torn Papers, Winter 88, and The Pillowman (Martin McDonagh). More about playwright/director Mohammad Yaghoubi: http://www.nowadaystheatre.org/mohammad-yaghoubee/

SummerWorks performance festival is Canada’s most important festival of theatre, dance and performance. Since 1991 it hosts over 60 performances for 11 days during the second week of August.

A Moment of Silence has been revived many times since its premiere. It has been staged in Iran (May 2001 and December 2010); Prague, Czech Republic (January 2016, June and November 2015); Richmond, California, USA (March 2015); Washington D.C., USA (September 2015). It received stage reading in France, Canada, Belgium, and the USA. It has been translated into English, French, Czech, Turkish, and Kurdish.

A Moment of Silence has received the following awards: