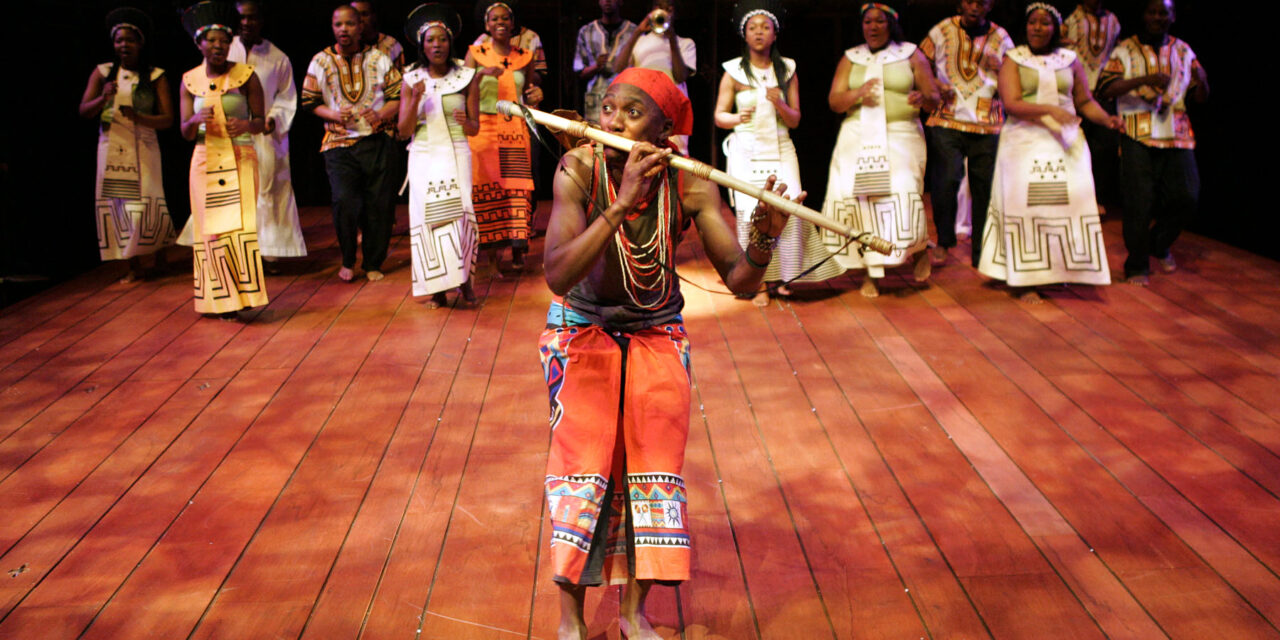 The cast of "The Magic Flute", Directed by Mark Dornford-May. Photo Courtesy of Isango Ensemble

The Magic Flute by the Isango Ensemble at ArtsEmerson

When the Isango Ensemble plays—on only eight marimbas—the opening strains of Mozart’s Overture for their adaptation of The Magic Flute, the audience is keenly aware that they are in for a unique experience of an otherwise ubiquitous opera. Quickly, despite the familiarity, one doesn’t miss the flutes, oboes, clarinets, bassoons, trumpets, trombones, timpani, and strings demanded in Mozart’s score, because the musical artistry here is so joyous and energetic. And in what becomes a hallmark of the rest of the show, the Isango Ensemble adjusts and adapts for Mozart’s melodies on their instruments and the libretto on their stage. For example, in the Overture, they eschew the fast tied-sixteenth notes in the Allegro section, which would have been quite difficult on marimba. But those tiny notes aren’t altogether important for this version of the opera, and in rearranging the music in such a way, they make this canonical piece a little bit of their own.

It has been 228 years since Mozart’s final opera Die Zauberflöte/The Magic hit the stage in Vienna in September 1791. The singspiel opera quickly became one of his most famous works and Mozart was only able to bask in the work’s success for a mere 10 weeks after the opera’s premiere; he died of kidney failure at the age of 35 in December 1791. In the two centuries of The Magic Flute’s existence, it has almost never been off the stage, playing the world over and generating numerous adaptations and translations. The popularity of the work is built into its conception. Mozart was near broke when performer and poet Emanuel Schikaneder approached him with an idea for the opera—specifically to be staged in Schikaneder’s theater. As opposed to some of Mozart’s other operas, which were written at the behest of estates, palaces, or high theater, The Magic Flute was written specifically for the popular theater, and Schikaneder was all too excited to have a work that welcomed spectacle; the play opens with Tamino (the tenor lead) battling a monstrous snake, there are trials of fire and water, wise magical children, and all manners of bird effects possible in the text. And the text is surprisingly readable. Of all of Mozart’s work, Schikaneder’s libretto for The Magic Flute reads comfortably as a play text, full of intrigue, humor, and lots of drama. 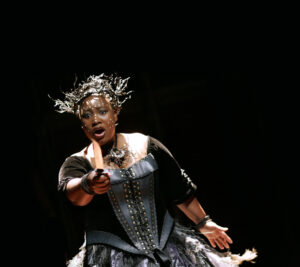 The accessibility of the work, its fantastical elements, and unforgettable musical ideas have made the work a deep well of inspiration for auteur directors and designers. In America alone, directors and designers such as painters David Hockney, Marc Chagall, illustrator Maurice Sendak, director Julie Taymor have tackled the property over the years. But most of their approaches are visually grandiose and full of spectacle. What unfolds on ArtsEmerson’s stage is the complete opposite of that: it is pared-down, simple, and humble in design, but raucous and grand in its performance. For example, the center stage is a raked, slatted playing space with two small sunken entrances towards the back wall. The orchestra of marimbas and drums flank the right and left of the stage. Nothing flies in, no new set pieces explode onto the scene. But when the ensemble dances and sings in rich harmonies, one can envision a verdant underbrush, the colorful plumage of Papageno’s birds, and the deep darkness of the Queen of the Night’s landscape without the painted drops or the sculpted masks. This type of theater asks what any good theater asks of its audience: a double vision. We are to see physical actors playing out a story and the invisible world they are creating, all at that same time. In a way, it is also how the opera is asking us to engage with Mozart’s work: we are to see the South African performers, garbed in contemporary and traditional dress, daubed with white ochre, singing in thick South African harmonies, while seeing the music and story of Mozart’s work beneath it.

And what we see on the stage is fantastically fun. Director Mark Dornford-May and arranger, composer, and musical director Mandisi Dyantyis carefully adapt the opera, with Masakana Sotayis (Tamino) and Nombongo Fatyi (Pamina) as the standout leads and lovers of the story. In the opera, young Pamina is kidnapped by Sorastro (Ayanda Tikolo) from the tutelage of her mother, the fearsome Queen of the Night (Nontsusa Louw). Tamino, alongside his new companion Pappageno (hilariously played by Zamile Gantana), is recruited by the Queen to find Pamina and steal her from the clutches of Sorastro. Naturally, Pamina and Tamino fall in love and their mettle is tested by Sorastro, who believes that they both could rule if their love is true and if they are pure of heart.

This classic tale of the path and trials of love remains mostly unchanged narratively, but the creative team has crafted a work that balances the world of Mozart’s opera and the cultural landscape of Cape Town. Songs sometimes stay close to the original settings or wildly veer off course into the lush vocal arrangements of South Africa. Take the opening song of Act II “O Isis und Osiris.” The song only briefly begins in the melody of The Magic Flute but quickly grows into gorgeous harmonies, with stomping and clapping that evokes the religious fervor necessary to the setting. It is an exciting mash-up of cultures that feels respectful and appreciative of both worlds. 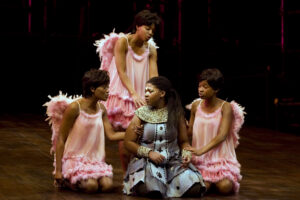 Not to say that all is magical in this production. There are a few flaws and complications in the production that were slight annoyances in an otherwise exciting production. Like true opera, the performers are unamplified (or un-miked), which is challenging in the Cutler Majestic space, where some of the sound gets lost. Male singers were more often aurally swallowed by the space. Additionally, on the night I attended, both Nontsusa Louw as the Queen of the Night and Ayanda Tikolo’s Sarastro weren’t able to hit their highest and lowest notes respectively. To be fair, Mozart has created a huge task for both the coloratura soprano and bass, but both high and low notes give the piece some of its otherworldly flavor and pizazz.

This production is back on ArtsEmerson’s stage after its 2014 run in Boston and it is a welcome return. The energy is high, and the talent is enormous. But most importantly, the work expresses the sublime and humor essential to Mozart’s opera while speaking in its own voice, on its own terms.