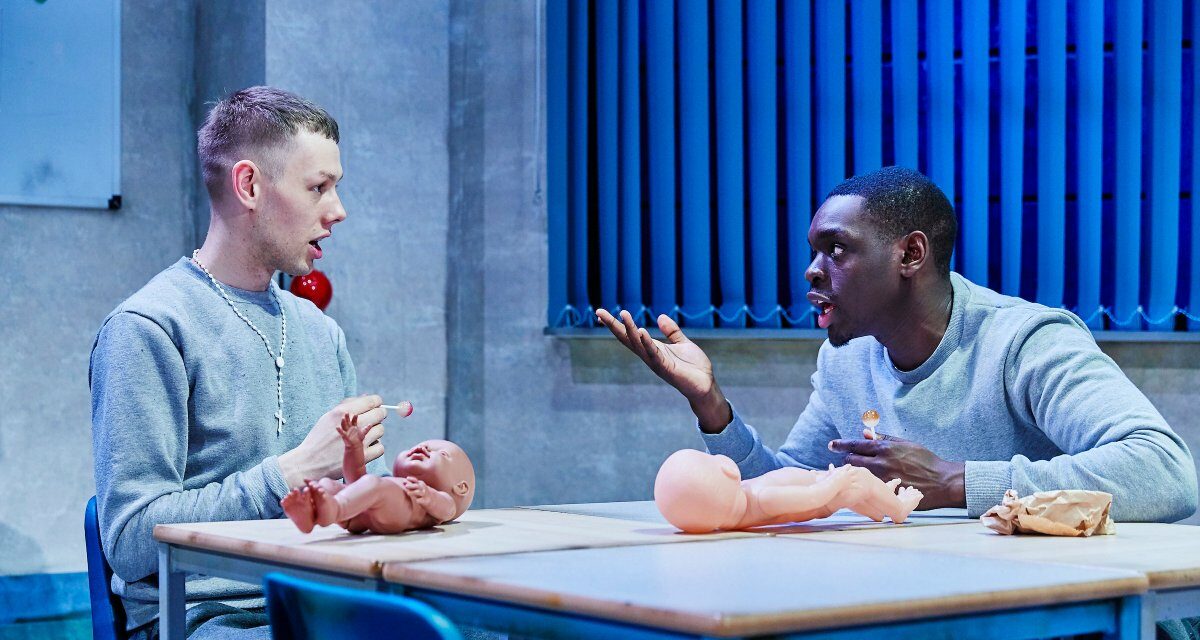 Josh Finan and Ivan Oyik in "Shook" at Southwark Playhouse. Photo: The Other Richard.

The winner of the 2019 Papatango New Writing Prize, Shook by Samuel Bailey offers a glimpse into an unexpected corner of the criminal justice system. It is set in a classroom, but not in a school. Instead, we find ourselves in a young offenders institution, where three teenage boys meet in a room streaked with sickly, distant shades of blue. Cain (Josh Finan), annoyingly loud and harmlessly jumpy, excels at garrulousness. The visibly pained Jonjo (Josef Davies) remains silent and contemplative. And Riyad (Ivan Oyik) asserts himself as the toughest of them all, but not without tender concerns of his own. They are all stuck in this building because they have committed crimes, though the reason they are stuck in this room is that they are all fathers.

They are brought together to participate in a series of sessions on parenthood, delivered by an instructor named Grace (Andrea Hall). Her syllabus ranges from how to change diapers to how to resuscitate a baby—all with the aid of plastic baby dolls, which the boys handle with a mixture of playfulness and suspicion. Unsurprisingly, they show different degrees of interest in these exercises. Jonjo proves meekly attentive to Grace’s instructions; Cain treats everything as a joke; Riyad cannot even bring himself to touch the doll. They are alternately humored and haunted by the reality to which their practice points. Trapped in a system that intends to punish and educate them at once, that does not make them feel safe, how can they even begin thinking about taking care of another life? How—and when—can they identify as fathers without even having seen their children?

Bailey’s delicately written play grapples with these questions in admirably subtle ways. Indeed, much of what he presents us is rambling, casual chatter among these three characters, which amply evinces his sharp ear for natural speech—including the cornered rhythms of strained, uneasy relations. But while this predominance of the seemingly uneventful strengthens the play by lending itself to nuanced character studies, it also deprives it of a clear thrust. Even though each of the boys is looking forward to something in the near future, the play is not powered by those aspirations and occasionally stagnates. Further, Grace’s sessions on fatherhood—though all imagined very engagingly—come to occupy less than half the work, which puts them in a slightly awkward position with respect to the boys’ non-parental concerns. These dramaturgical glitches, however, don’t cast a big shadow on what is otherwise a powerful and powerfully told story: the final scene alone, which depicts a shattering moment of craved intimacy, makes up for them.

George Turvey’s meticulous direction treats the characters’ shifting dynamics and knotty, thick dialogue with impressive command. In this, he receives vital support from a uniformly excellent cast, whose portrayals of these quietly tormented souls are deeply felt. They all display an intensity that does not succumb to exaggeration or sentimentality. Josef Davies as Jojo, in particular, is impeccable: his twitching face and stuttering speech animate a character whose hinterland grows ever more affecting. Richard Hammarton’s sleek, thrillingly disorienting sound design and Johanna Town’s refined lighting make for appealing transitions that allow the production to breathe with ease.

Shook may be a bit of a slow burn, but it does live up to its title by knowing how, and when, to shake its audience up. 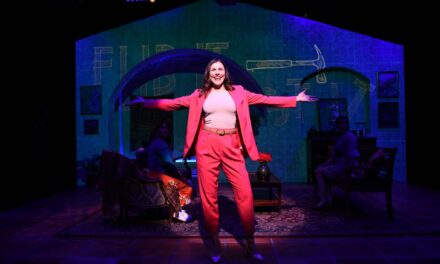 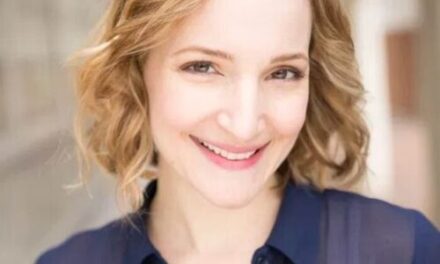